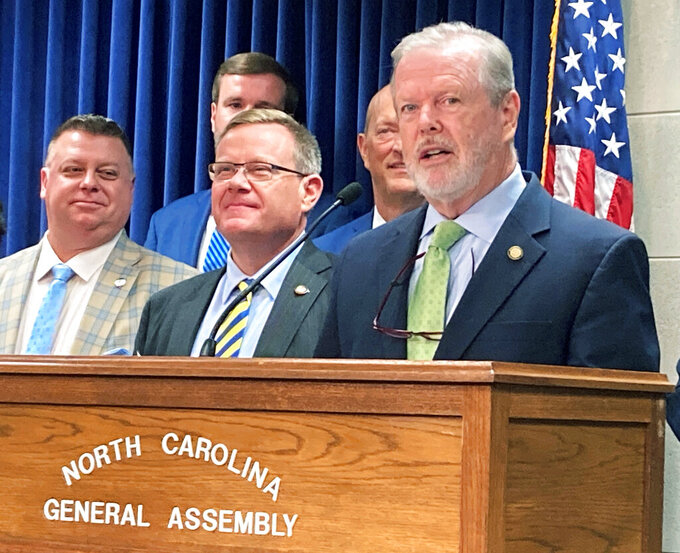 RALEIGH, N.C. (AP) — The North Carolina General Assembly wrapped up its chief work session for the year on Friday by finalizing proposed state budget adjustments for the new fiscal year, crossing off other must-do legislation but leaving some big policy matters unresolved or thwarted.

The Republican-penned spending measure, which alters the second year of a two-year budget plan enacted last November, received strong bipartisan support again, like it did while securing initial House and Senate approval on Thursday.

The bill would spend $27.9 billion for the new year that began Friday but also sets aside several billion additional dollars in reserves and construction projects.

It also contains additional pay increases for teachers and state employees, although they're not as large as those sought by Democratic Gov. Roy Cooper, who is reviewing the measure, a spokesperson said. He'll have 10 days to decide whether to sign the bill into law, veto it or let it become law without his signature.

With over 30 legislative Democrats voting for the measure, Cooper appears hard-pressed to have any veto he issues stick should GOP leaders attempt an override later this month. The House voted 82-25 and the Senate 36-8 for the measure with little debate Friday, approving it after Thursday's more robust discussion.

“It looked like a whole lot of folks in the General Assembly are on board with it, and hopefully that will resonate with him,” Senate leader Phil Berger, a Rockingham County Republican, said after his chamber completed business.

The hodge-podge of other legislation that got final General Assembly approval on Friday included the annual “regulatory reform” measure and a restructuring of oversight of the state’s two schools for the deaf and one for the blind. Another approved measure makes clear that hospitals or medical offices can’t attempt to bill victims of sexual assault or their insurance companies for forensic medical examinations, leaving it to a special state fund for payment.

A measure approved Friday that Cooper's likely to veto would tell local sheriffs to determine the immigration status of jail inmates and assist U.S. Immigration and Customs Enforcement agents who want to pick them up. Cooper successfully vetoed a similar 2019 bill.

The General Assembly session that began May 18 may be best remembered for consequential policy measures that failed to reach the finish line.

Atop the list is Medicaid expansion, which had been opposed for years by Republicans but sought by Cooper since taking office in 2017.

Berger reversed course, embracing a measure in May that accepted expansion for several hundred thousand low-income adults. It was attached to provisions that among others would ease “certificate of need” laws and allow advanced-practice nurses to work without a physician’s supervision.

Instead, Speaker Tim Moore championed a proposal that would direct Cooper's health department to create a Medicaid expansion plan by mid-December, after which there would be a legislative vote to accept all or part of the plan. The House approved the bill this week by a wide margin, but negotiations with the Senate fizzled in the final days.

Berger said he anticipated expansion talks would continue. And Moore said he believed his legislation sent a signal to Cooper to have a preliminary Medicaid plan — with certain fiscal and medical benchmarks — ready to offer the General Assembly by December in case negotiations with the Senate succeed.

“It’s very clear where (the House) is on the issue,” Moore ,a Cleveland County Republican, told reporters. “I believe the overwhelming majority of this House would support and support that with those parameters and those guidelines.”

Two other pieces of Senate legislation that passed the chamber — one that would authorize and regulate sports betting and another to legalize marijuana for medical use — didn't succeed in the House this session. Support to consider medical marijuana this year was tepid among House Republicans, and the sports betting legislation got tripped up when the House defeated a measure by one vote.

Berger, who voted for both measures, said he took a “glass half-full” view to the Senate measures that fell short, saying it's not uncommon for policy proposals by one chamber to fall short in the other.

Legislators won't be too far removed from Raleigh for the remainder of the year. The adjournment resolution approved by both chambers Friday directs them to return July 26, during which they could vote on Cooper's vetoes.

Then the legislature would formally reconvene once a month through December. Republicans say that would give them the opportunity to address unforeseen circumstances, or to respond to the results of any election- or redistricting-related legislation. While the topics acted upon could be widened, it's also possible no action will be taken. Regardless, another edition of the 170-member General Assembly will be seated in January.