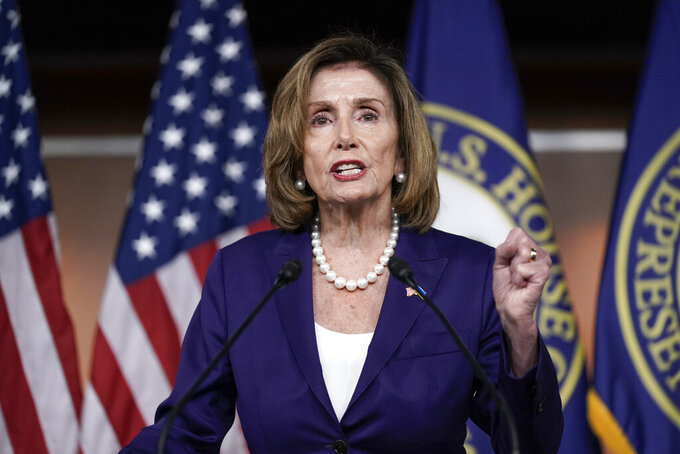 J. Scott Applewhite, ASSOCIATED PRESS
FILE - Speaker of the House Nancy Pelosi, D-Calif., speaks at a news conference as Democrats push to bring the assault weapons ban bill to the floor for a vote, at the Capitol in Washington, July 29, 2022. (AP Photo/J. Scott Applewhite, File)

WASHINGTON (AP) — With control of the House still hanging in the balance, Speaker Nancy Pelosi stayed mum Sunday on her future plans but said congressional colleagues are urging her to seek another term as Democratic leader following a strong showing in the midterm elections.

Appearing in Sunday news shows, Pelosi said Democrats are “still alive” in their fight to win the chamber and that she will make a decision on whether to run for House leadership in the next couple weeks.

“People are campaigning and that’s a beautiful thing. And I’m not asking anyone for anything,” she said, referring to House Democratic leadership elections set for Nov. 30. “My members are asking me to consider doing that. But, again, let’s just get through the (midterm) election.”

“A great deal is at stake, because we will be in a presidential election," Pelosi said.

Over the weekend, Democrats clinched control of the Senate following Sen. Catherine Cortez Masto's victory in Nevada. But in the House, a majority remains unsettled with neither party having yet reached the 218 seats needed to control the 435-member chamber. As of Sunday, Republicans had 212 seats compared to 204 for the Democrats, with 19 races still to be called by The Associated Press.

Some races can take days or even weeks to call.

Pelosi, D-Calif., declined to predict whether her party will retain control of the House, saying she was “disappointed” with four Democratic losses in New York, including by Congressional Campaign Chairman Sean Patrick Maloney, which ultimately could make the difference.

“Nonetheless, we still think we have a chance to win this,” she said. “Nobody would have ever expected that we would be this close. Well, we expected it.”

On the GOP side, House Republican leader Kevin McCarthy is seeking to become House speaker if his party prevails, but the disappointing showing in the midterms has created turmoil for leaders and calls for a new direction. Former President Donald Trump's effect on the 2022 races is also being hotly debated as he prepares to announce another run.

Pelosi on Sunday said she believed that President Joe Biden should run for a second term, citing his legislative accomplishments such as the bipartisan infrastructure law and the Inflation Reduction Act as well as the creation of millions of jobs under his watch.

“He has been a great president and he has a great record to run on,” she said.

The 82-year-old Pelosi, who has led Democrats in the House since 2003 and is the first female speaker, had struck a deal with House members to serve for two more terms as leader — or four years — after Democrats won control of the chamber in 2018. But she hasn't announced her plans, nor have her top two deputies, Majority Leader Steny Hoyer, D-Md., and Whip Jim Clyburn, D-S.C. There has been some pressure from younger House members to pass the torch to new leaders.

Pelosi's decision also comes after her husband was attacked late last month in the couple’s San Francisco home, suffering a skull fracture and other injuries. The intruder, 42-year-old David DePape, demanded “Where is Nancy?” before striking Paul Pelosi with a hammer. She was in Washington at the time.

Pelosi said Sunday that her husband's recovery will be a “long haul, but he's doing well," though the trauma of the attack was “intensified” by Republicans' “ridiculous, disrespectful attitude.” Top Republicans, including Trump, had downplayed the attack and spread misinformation about it.

“It wasn’t just the attack. It was the Republican reaction to it, which was disgraceful,” she said.

Pelosi said her decision on whether to run again for House leadership will be “about family" but "also my colleagues," citing a need to move forward “in a very unified way” going into a new Congress and the 2024 campaign season. She stressed the opportunities for Democrats that lie ahead.

“Who would have thought two months ago that this red wave would turn into a little tiny trickle, if that at all?” she said. “But we never believed that. We believed.”

“There are all kinds of ways to exert influence,” Pelosi added. "Speaker has awesome power, but I will always have influence.”

Pelosi spoke on CNN's “State of the Union” and ABC's “This Week.”

Follow AP’s coverage of the 2022 midterm elections at: https://apnews.com/hub/2022-midterm-elections