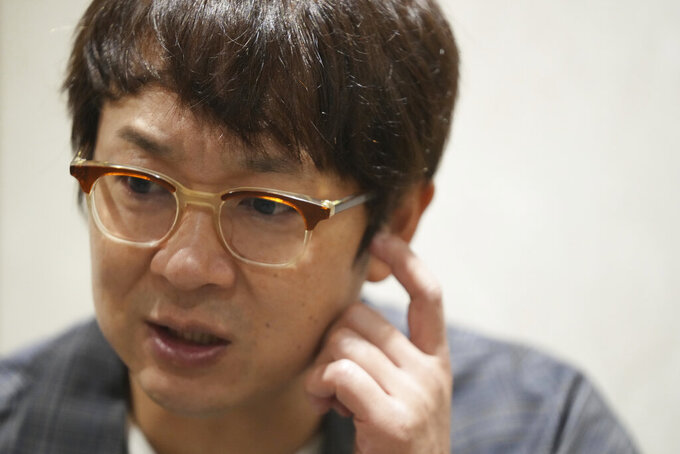 The Japanese director and his three latest works are being featured at the Tokyo International Film Festival, opening Oct. 30.

“When you think about how the world can become a better place, what’s at the bottom of the problem is a lack of imagination. The theme of my latest film is about this sensitivity, the ability to imagine even in a little way what others may be going through, to overcome and soften the divides,” Yoshida told The Associated Press recently.

Yoshida’s works explore the dark side of the human condition, like petty jealousies and shameful guilt, although he insists he believes in the potential for change, what he calls “taking that first step” out of despair.

In “Intolerance,” for which Yoshida also wrote the screenplay, Arata Furuta delivers a gut-wrenching performance as the stoic main character, who loses his daughter in a car crash. The fisherman has never fully expressed his love for his daughter while she was alive and can’t get over her death.

He goes on a relentlessly cruel pursuit of a grocery store manager he blames for his daughter's death because the manager had chased the young woman on suspicion of shoplifting. The film portrays how Japanese society, often working like a claustrophobic village, ostracizes and punishes what it sees as erring individuals. The frenzied mass media add to the pressure.

Yet the heartbreaking ending expresses that tiny bit of hope Yoshida has in mind in all his movies.

“There is the theme of what is right versus what is wrong, which is easy to understand. But on another level, I wanted to depict how each individual comes to terms with what is lost. That’s how I began on this story,” he said.

Another festival feature is “Hime-Anole,” based on a manga, or Japanese comic, centering on two youngsters who clean buildings. They run into a former schoolmate, who, as it turns out, has become a serial killer.

The title refers to a lizard and symbolizes a life to be consumed as food by a stronger predator.

Yoshida, 46, had his heart set on becoming a director since he was in kindergarten, “because I wanted to meet Jackie Chan,” he jokes. He has yet to meet the Hong Kong superstar.

Yoshida was a loner growing up and so he took up boxing instead of team sports. He became so good he was a sparring partner for a professional fighter until a few years ago. He still boxes to stay fit, a devotion he’s kept up for more than three decades.

That experience came in handy for “Blue,” also being shown at the festival. Kenichi Matsuyama portrays the hero, a winless boxer. The title refers to the blue corner of the ring, reserved for the lower-ranked boxer.

“Yoshida’s ability to bring out such drama from ordinary people is something to behold. It is a great pleasure to highlight his work,” said Shozo Ichiyama, the festival’s programming director.

Yoshida worked with legendary auteur Shinya Tsukamoto, who directed “Tetsuo” and “Fires on the Plain” and acted in Martin Scorsese’s “Silence.” Yoshida said Tsukamoto so meticulously controls every detail of filmmaking he has learned to be just the opposite, to let go and leave some things to improvisation and chance.

But, after all these years, becoming a filmmaker, by definition a huge group effort, has turned that once-solitary child into a team player.

“I forcibly changed my character because I want to make films,” Yoshida said.

His next work is “a black comedy,” an offbeat love story, he said, quite different from the recent films.

This year’s festival, which runs through Nov. 8, also showcases Asian films and Japanese animation, as well as a 4K remastered “Family Game,” directed by Yoshimitsu Morita, to commemorate the 10th anniversary of his death. The opening film is “Cry Macho,” directed by, produced by and starring Clint Eastwood. The closing film is “Dear Evan Hansen,” a coming-of-age musical film by Stephen Chbosky.