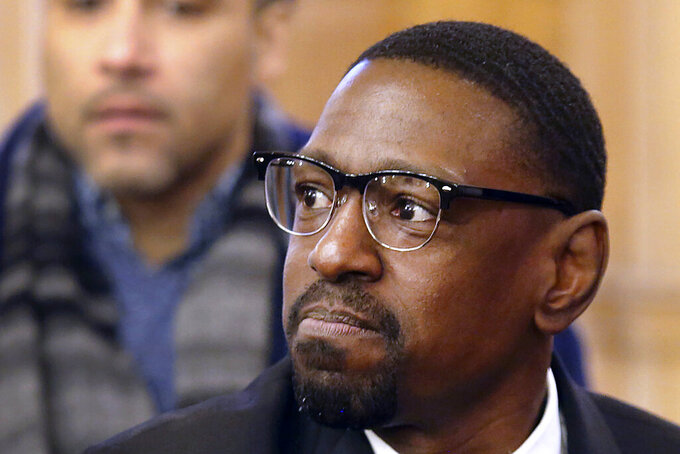 Thad Allton, ASSOCIATED PRESS
FILE - In this Feb. 14, 2018 file photo, Lamonte McIntyre, convicted of a 1994 double homicide in Kansas City, Kan., sits before the Senate Judiciary Committee in Topeka Kan. The Unified Government of Wyandotte County and Kansas City, Kan., has agreed to pay $12.5 million to McIntyre, who spent 23 years in prison for a double murder he did not commit, and the his mother to settle their lawsuit which had sought up to $123 million in damages.  (Thad Allton/The Topeka Capital-Journal via AP, File)

KANSAS CITY, Kan. (AP) — A local government in Kansas has agreed to pay $12.5 million to a man and his mother after he spent 23 years in prison for a double murder he did not commit.

The Unified Government of Wyandotte County and Kansas City, Kansas, approved the settlement Thursday and said in a statement Friday that it admits no guilt in the wrongful conviction and two life sentences of Lamonte McIntyre in the mid 1990s.

McIntyre was 17 in 1994 when he was arrested in Kansas City for the shooting deaths of 21-year-old Doniel Quinn and 34-year-old Donald Ewing. McIntyre was freed in 2017 after a local prosecutor asked the court to vacate his convictions and drop all charges, calling his case an example of “manifest injustice.” Prosecutors presented no physical evidence tying McIntyre to the killings and their case largely hinged on testimony that was allegedly coerced.

The following year, McIntyre and his mother sued the unified government and former Kansas City, Kansas, police detective Roger Golubski, who they have accused, along with other police, of framing McIntyre for the killings. Their lawsuit sought up to $123 million in damages.

McIntyre and his mother have said Golubski coerced her into sex and then framed her teenage son for the double homicide because she rejected the detective’s later sexual advances. They also allege Golubski abused dozens of Black women for years and many officers were aware of his conduct.

Federal authorities are investigating Golubski, and the Kansas City, Kansas, police department revealed last October that it had been responding to subpoenas from the FBI since 2019 involving allegations against Golubski.

Golubski has denied the allegations. His attorney, Morgan Roach of Kansas City, did not immediately return phone messages left Friday at his office and on his cellphone seeking comment.

“Lamonte now hopes to put this painful chapter behind him and move forward with his life,” Pilate said in an email. “Lamonte remains deeply committed to the cause of justice, particularly in Wyandotte County, and will continue to be a voice for those who have suffered wrongful convictions or other injustices.”

In 2020, McIntyre was awarded a certificate of innocence and $1.5 million from Kansas after the state attorney general's office initially fought his compensation claim. McIntyre now lives in Arizona.