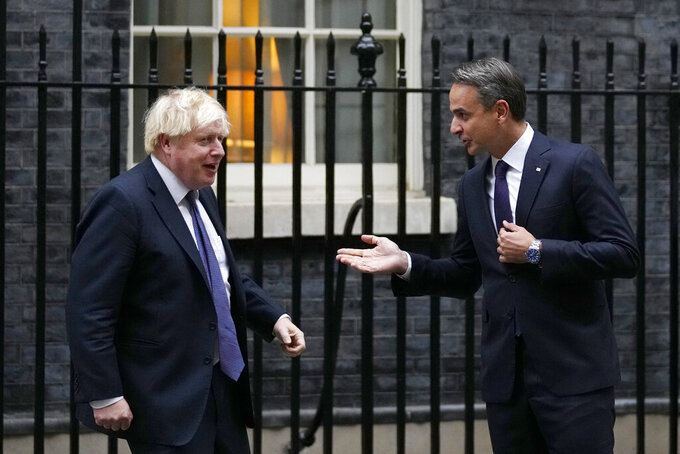 LONDON (AP) — British Prime Minister Boris Johnson held talks Tuesday in London with Greece's leader amid a renewed push by Athens for the British Museum to return marble statues that once stood in the Parthenon.

Johnson said he “understood the strength of feeling of the Greek people” about the sculptures after Greek Prime Minister Kyriakos Mitsotakis raised the issue during the talks. But the British leader stressed that decisions about the issue rest with the British Museum, where the marbles are held.

“The leaders agreed that this issue in no way affects the strength of the UK-Greece partnership,” Johnson’s office said.

The marbles — 17 figures and part of a frieze that decorated the 2,500-year-old Acropolis monument — were taken from the ancient temple by Lord Elgin, the British ambassador to the Ottoman Empire, in the early 19th century. They have been at the center of a long dispute between the two countries.

Britain maintains that Elgin acquired the sculptures legally when Greece was ruled by the Ottomans. The Greek government says they were stolen and wants them returned for display in the new Acropolis Museum that opened in 2009.

Mitsotakis told Britain's Daily Telegraph newspaper last week that “the marbles were stolen in the 19th century, they belong in the Acropolis Museum and we need to discuss this issue in earnest.”

Earlier Tuesday, Johnson's spokesman stressed that the British Museum operates independently of the government and is free from political interference.

“Any decisions relating to the collections are taken by the museum’s trustees and any question about the location for the Parthenon sculptures is a matter for them," he said.

The British Museum said on its website that Elgin's actions were “thoroughly investigated by a Parliamentary Select Committee in 1816 and found to be entirely legal, prior to the sculptures entering the collection of the British Museum by Act of Parliament.”

The museum's trustees added they “firmly believe that there’s a positive advantage and public benefit in having the sculptures divided between two great museums, each telling a complementary but different story.”