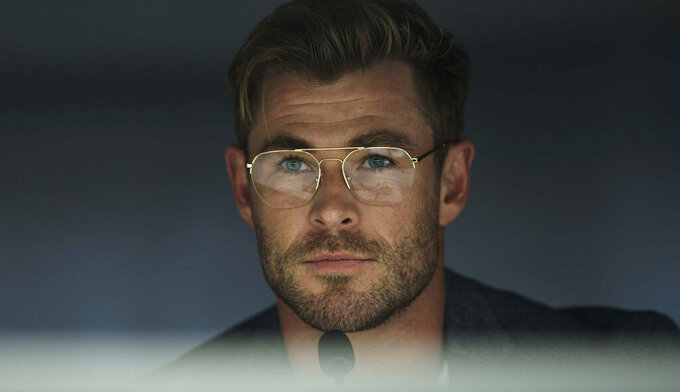 Uncredited, ASSOCIATED PRESS
This image released by Netflix shows Chris Hemsworth in a scene from "Spiderhead." (Netflix via AP)

NEW YORK (AP) — “Top Gun: Maverick” director Joseph Kosinski again had a plane in the air, only this time Chris Hemsworth was at the wheel.

They were shooting “Spiderhead,” a science-fiction prison thriller based on a George Saunders story, along the coast of Australia. The film is set almost entirely in a remote concrete fortress jutting out over the sea, but it opens with the arrival of a seaplane that was flown by Hemsworth with Kosinski lying in the back. The slow-moving, prop-engine plan was a far cry from the F-18 jets of Kosinski’s box-office smash.

“It was initially going to be the plane Tom Cruise did his work in,” Hemsworth jokes.

“Spiderhead,” which debuts Friday on Netflix, is in many ways the opposite of “Top Gun: Maverick” It’s a talky, interior film made during the pandemic that will be streaming in homes, not filling IMAX screens. But chief among its quirky pleasures is Hemsworth’s leading performance as the researcher who presides as a benevolent, '80s-yacht-rock-dancing tyrant over the Spiderhead Penitentiary and Research Center, cheerfully conducting experiments in which he drugs prisoners to chemically raise or lower their moods, appetites and verbal acuity.

For a performer who has only occasionally flashed his comic ability (hosting “Saturday Night Live," as the secretary in “Ghostbusters"), Hemsworth’s deft balancing act in “Spiderhead” showcases a range well beyond the MCU. Hemsworth, who recently began shooting George Miller's “Furiosa,” returns as Thor again in next month's “Thor: Love and Thunder," a franchise that has gradually loosened to adapt to its star's comic agility. And there are more action movies ("Extraction 2") on the way.

But without a fight scene or a special effect, “Spiderhead” may convey Hemsworth's powers better than anything before it.

“This was one of the most enjoyable experiences I’ve had,” Hemsworth said in a recent interview by video-conference from Australia. “Normally, these films, you string them out over three or four months. In this instance, due to my schedule, due to COVID restrictions and so on, it was compressed into a four-week period. Initially, we didn’t think it was possible.”

Aside from pandemic factors, “Spiderhead” is uniquely improbable considering its source material. Few have ever read a Saunders story and thought it would transfer seamlessly into a movie. But screenwriters Rhett Reese and Paul Wernick developed the author's 2010 story “Escape From Spiderhead,” a farcical yet moving first-person account of a prisoner (played by Miles Teller in the film) undergoing lab tests. They greatly expanded the part played by Hemsworth, Dr. Steve Abnesti, who enthusiastically runs the facility with few rules and mysterious intentions. He's a little like the nicest Bond villain you've ever met.

Kosinski sent the script to Hemsworth hoping he’d respond to the role.

“In his performances, I always saw glimpses of a wide range of availabilities that maybe sometimes gets masked by the action films and his leading-man looks,” says Kosinski.

“There's a precision to his physicality that really lends itself to this role," the director adds. "He has this ability that I’ve seen in Tom (Cruise), as well, to really understand the frame and the lens and where to be in it. That’s something that not everybody has. He’s just really aware of the medium and how to use it effectively.”

In “Spiderhead," Hemsworth uses the exactitude and charisma he normally leans on in more conventional leading-man performances for darker, manipulative purposes.

“There was sort of a nervous energy underneath it, bubbling away, even in the stiller moments,” Hemsworth says. “I was trying to tap into that feeling when you’re about to break and you either laugh or cry, but you’re right on the tightrope. Whatever that feeling is, I wanted the character to be in it and hopefully give a sense of: Which way is he going to turn next? What’s going to be the next reaction?”

“Spiderhead” was shot largely in sequence on a sound stage, and Hemsworth seems visibly liberated by the lack of constraints — costume or otherwise — of the production.

“I’m so thankful for the films I’ve played but they didn’t give me the range and opportunity to explore in this way,” Hemsworth says.

The 38-year-old Hemsworth drew partly from CEOs and technocrats who exude a hyper-intelligent, obsessive focus, but who might, in their certainty of technology's potential, lack empathy. Still, the character's high-functioning narcissism isn't entirely alien to Hemsworth, either.

“There was a cheekiness to the character that reminded me of myself in school, allowing my thoughts to run ahead of one another, not really caring about what I’m doing or what I’m saying,” he says. “That enthusiasm and that excitement is me at my most inventive and creative. Catch me on a day when I’m exhausted and not in that space, then that’s not the character. But that part of me I wanted to be prominent.”

“Spiderhead" arrives between bigger blockbusters by both its director and star, on the heels of “Top Gun: Maverick” — a movie that has played savior to movie theaters — and the cusp of “Thor: Love and Thunder." Both are likely to rank among the biggest ticket sellers of the year. Kosinski, speaking as the “Maverick” grosses continued to roll in, is still getting his head around the film's success and, as he says, “just how many people are responding to a movie that was shot in a very traditional way, live-action, in camera.”

“This is the type of movie I grew up on,” Kosinski says.

But for both Hemsworth and Kosinski, the variation between projects, and the ability to go off and make a strange, hard-to-describe sci-fi film for a mass audience is part of the particular charm of “Spiderhead.” Kosinski last week set up his next project, a Formula One racing film starring Brad Pitt and Apple TV+, with plans for a wide exclusive theatrical release before streaming.

“It’s a very interesting hybrid. It kind of spans these two films that I just did,” says Kosinski. “Everyone’s trying to figure out: What does the future of cinema look like? We thought this was an interesting model to try.”

For Hemsworth, whose “Extraction” ranks as one of Netflix's most-watched films, “Spiderhead" was a deviation that only encouraged him when he readjusted back to bigger movies.

“Both service the other,” Hemsworth says. “Any time I venture out and do something different and then return back to, say, Thor, I find I have a different appreciation for the character and also a different opinion of it.”