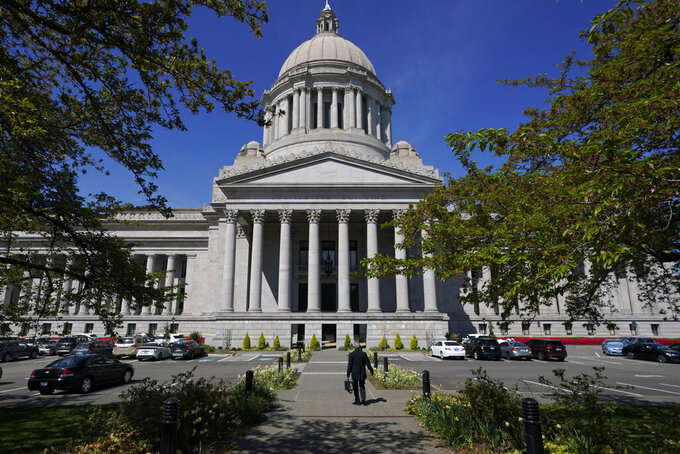 Ted S. Warren, ASSOCIATED PRESS
FILE - A person walks near the Legislative Building, Wednesday, April 21, 2021, at the Capitol in Olympia, Wash. Washington's redistricting commission failed to meet its deadline and on Tuesday, Nov. 16, kicked the job of creating new political maps to the state Supreme Court. The bipartisan commission had a deadline of 11:59 p.m. Monday to approve new boundaries for congressional and legislative districts following the 2020 census. (AP Photo/Ted S. Warren, File)

SPOKANE, Wash. (AP) — The head of Washington state's bipartisan redistricting commission that failed to meet its deadline for redrawing political maps urged state Supreme Court justices to still consider their work now that the high court will have to complete the process.

The panel had a deadline of 11:59 p.m. Monday to approve new boundaries for congressional and legislative districts following the 2020 census but acknowledged Tuesday it had not been able to complete its task on time.

This is the first time the panel has failed to finish its work on time since the state adopted a constitutional amendment giving redistricting authority to a bipartisan commission after the 1990 census.

"While we acknowledge we missed the deadline for our maps to be considered by the Legislature, we see no reason why the Court can’t do so,” Commission Chair Sarah Augustine said in a statement late Tuesday night. “These maps reflect the input of the thousands of people who took part in the process with us. It would be a shame to see these maps go unconsidered simply because the clock struck 12.”

Despite the plea to the Supreme Court many were critical of the process by the panel, especially in the final hours Monday night when there were complaints its deliberations were closed to the public and may have violated open meetings laws.

The commission released its final maps late Tuesday - a day after their time limit.

The commission members, who scheduled a news conference for Thursday, blamed their failure to meet the deadline on the late release of census data combined with technical problems.

The panel’s work was denounced by Redistricting Justice for Washington, which had been seeking a majority Hispanic legislative district in the agricultural Yakima Valley. That was likely a key point of contention on the commission, the group said.

The state Supreme Court said it was prepared to take on the redistricting job.

“If it is confirmed that the commission missed the Nov. 15th deadline ... the Supreme Court shall adopt a plan by April 30, 2022,” the court said. “The court will await filings from the parties.”

The April 30 deadline would give candidates and incumbents less than three weeks to know the boundaries of their U.S. House and legislative districts before the May 20, 2022, deadline to file for office.

Under state law the Washington Supreme Court must come up with 10 U.S. House districts and 49 state legislative districts that will be in place for the next decade, starting with the 2022 midterm elections.

Washington's Supreme Court justices are elected but the contests are officially non-partisan.

By law, at least three of the four had to agree on new political maps by Nov. 15.

In it's late Tuesday statement, the panel said it sent a copy of the final mapping plan to the Supreme Court.

“The plan won Commission support but was not completed in the time prescribed by law thereby giving jurisdiction over the process to the Court,” the statement said.

This story has been updated to correct that the commission new's conference is scheduled for Thursday, not Wednesday.