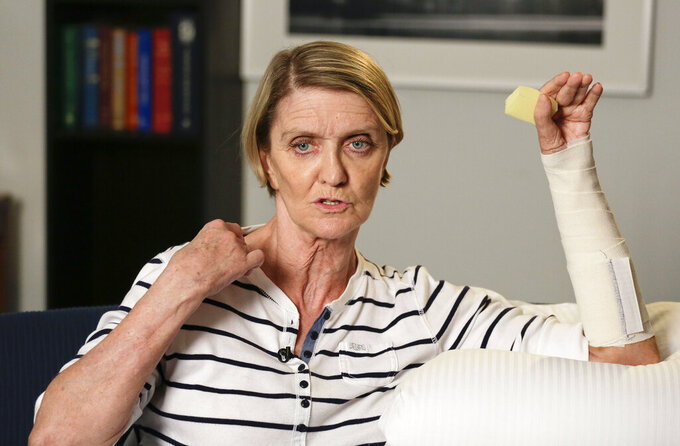 Julie Jacobson, ASSOCIATED PRESS
FILE - In this Oct. 9, 2014 photo, Associated Press reporter Kathy Gannon answers questions during an interview in New York. This was Gannon's first interview since she and AP photographer Anja Niedringhaus were attacked on April 4, by a gunman in Khost Province in eastern Afghanistan as they prepared to cover the presidential election the next day. Niedringhaus was killed in the attack and Gannon is recovering from multiple gunshot wounds. (AP Photo/Julie Jacobson, File)

KABUL, Afghanistan (AP) — The Afghan policeman opened fire on us with his AK-47, emptying 26 bullets into the back of the car. Seven slammed into me, and at least as many into my colleague, Associated Press photographer Anja Niedringhaus. She died at my side.

I could barely whisper, “Please help us.”

Our driver raced us to a small local hospital in Khost, siren on. I tried to stay calm. At the hospital, Dr. Abdul Majid Mangal said he would have to operate and tried to reassure me. His words are forever etched in my heart: “Please know your life is as important to me as it is to you.”

Much later, as I recovered in New York during a process that would turn out to eventually require 18 operations, an Afghan friend called from Kabul to apologize for the shooting on behalf of all Afghans.

I said the shooter didn’t represent a nation, a people. For me, it was Dr. Mangal who represented Afghanistan and Afghans.

I have reported on Afghanistan for the AP for the past 35 years, during an extraordinary series of events and regime changes. Through it all, the kindness and resilience of ordinary Afghans have shone through – which is also what has made it so painful to watch the slow erosion of their hope.

I have always been amazed at how Afghans stubbornly hung on to hope against all odds. But by 2018, a Gallup poll showed that the fraction of people in Afghanistan with hope in the future was the lowest ever recorded anywhere.

I arrived in Afghanistan in 1986, in the middle of the Cold War. It seems a lifetime ago. It is.

Then, the enemy attacking Afghanistan was the communist former Soviet Union, dubbed godless by United States President Ronald Reagan. The defenders were the U.S.-backed religious mujahedeen, defined as those who engage in holy war, championed by Reagan as freedom fighters.

At that time, the God versus communism message was strong. The University of Nebraska even crafted an anti-communist curriculum to teach English to the millions of Afghan refugees living in camps in neighboring Pakistan. The university made the alphabet simple: J was for Jihad or holy war against the communists; K was for the Kalashnikov guns used in jihad, and I was for Infidel, which described the communists themselves.

There was even a math program. The questions went something like: If there were 10 communists and you killed five, how many would you have left?

When I covered the mujahedeen, I spent a lot of time and effort on being stronger, walking longer, climbing harder and faster. At one point, I ran out of a dirty mud hut with them and hid under a nearby cluster of trees. Just minutes later, Russian helicopter gunships flew low, strafed the trees and all but destroyed the hut.

Thrice the AP lost its equipment to thieving warlords, only to be returned after negotiations with the top warlord. One day I counted as many as 200 incoming and outgoing rockets inside of minutes.

The bloodletting of the mujahedeen-cum government ministers-cum warlords killed upward of 50,000 people. I saw a 5-year-old girl killed by a rocket as she stepped out of her house.

Despite the chaos of the time, Afghans still had hope.

In the waning days of the warring mujahedeen’s rule, I attended a wedding in Kabul where both the wedding party and guests were coiffed and downright glamorous. When asked how she managed to look so good with so little amid the relentless rocketing, one young woman replied brightly, “We’re not dead yet!”

The wedding was delayed twice because of rockets.

By mid-1996, the Taliban were on Kabul’s doorstep, with their promise of burqas for women and beards for men. As international sanctions crippled Afghanistan, one-eyed Taliban Mullah Mohammad Omar got closer to Al-Qaida, until eventually the terrorist group became the Taliban’s only source of income.

Many Afghans mourned the American deaths so far away. Few even knew who Osama bin Laden was. But the country was now squarely a target in the eyes of the United States. Amir Shah, AP’s longtime correspondent, summed up what most Afghans were thinking at the time: “America will set Afghanistan on fire.”

I was the only Western journalist to see the last weeks of Taliban rule. The U.S.-led coalition assault began on Oct. 7, 2001. The powerful B-52 bombers of the U.S. pounded the hills and even landed in the city.

On Nov. 12 that year, a 2,000-pound bomb landed on a house near the AP office. It threw me across the room and blew out window and door frames. Glass shattered and sprayed everywhere.

By sunrise the next day, the Taliban were gone from Kabul.

Afghanistan’s next set of rulers marched into the city: The mujahedeen were back.

The U.S. and U.N. returned them to power even though some among them had brought bin Laden from Sudan to Afghanistan in 1996, promising him a safe haven. The hope of Afghans went through the roof, because they believed the powerful U.S. would help them keep the mujahedeen in check.

Yet worrying signs began to emerge. The revenge killings began, and the U.S.-led coalition sometimes participated without knowing the details. The mujahedeen would falsely identify enemies – even those who had worked with the U.S. before – as belonging to al-Qaida or to the Taliban.

In the meantime, corruption seemed to reach epic proportions, with suitcases of money, often from the CIA, handed off to Washington’s Afghan allies. Yet schools were built, roads were reconstructed and a new generation of Afghans, at least in the cities, grew up with freedoms their parents had not known and in many cases looked on with suspicion.

Then came the shooting in 2014 that would change my life.

It was two years before I was able to return to work and to Afghanistan.

By that point, the disappointment and disenchantment with America’s longest war had already set in. Despite the U.S. spending over $148 billion on development alone over 20 years, the percentage of Afghans barely surviving at the poverty level was increasing yearly.

In 2020, the U.S. and the Taliban signed a deal for troops to withdraw within 18 months.

It was the sudden and secret departure of President Ashraf Ghani that finally brought the Taliban back into the city on Aug. 15, 2021. The Taliban’s rapid march toward Kabul fed a rush toward the airport. For many in the Afghan capital, the only hope left lay in getting out.

Now the future in Afghanistan is even more uncertain. Scores of people line up outside the banks to try to get their money out. Hospitals are short of medicine. Afghans are left to face the fact that the entire world came to their country in 2001 and spent billions, and still couldn’t bring them prosperity or even the beginnings of prosperity.

I leave Afghanistan with mixed feelings, sad to see how its hope has been destroyed but still deeply moved by its 38 million people.

Most certainly, though, I will be back.