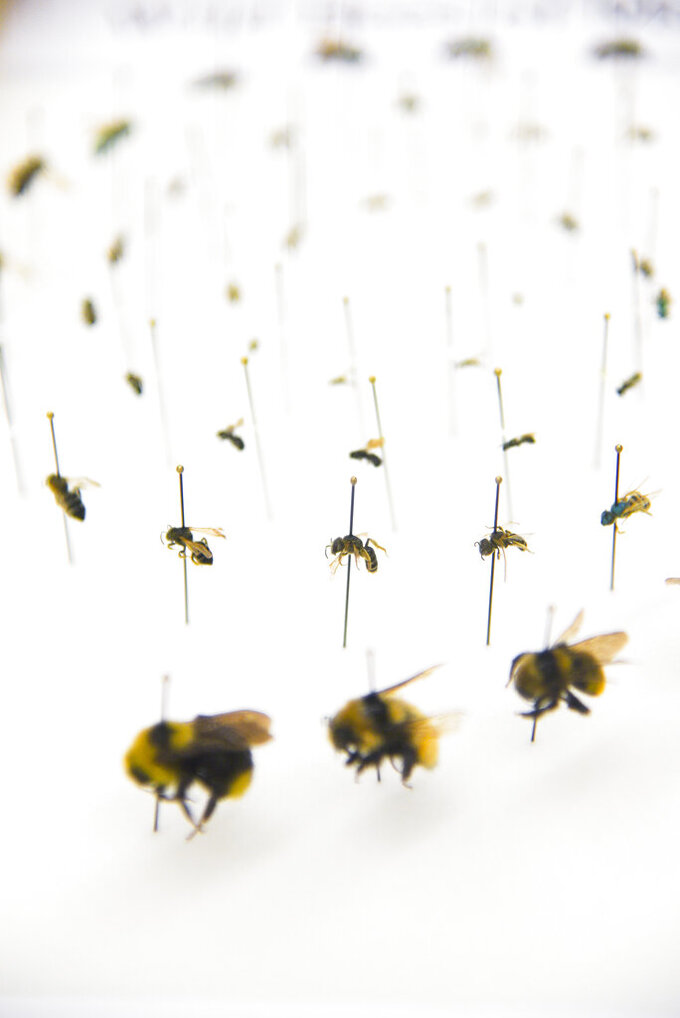 Samuel Wilson, ASSOCIATED PRESS
A spiral of wild bees collected in Montana are displayed as part of the Wild Bees of Montana project at the Montana Entomology Collection on the Montana State University campus, on Friday, April 29, 2022, in Bozeman, Mont. (Samuel Wilson/Bozeman Daily Chronicle via AP)

BOZEMAN, Mont. (AP) — Just off south 19th Avenue near Montana State University is an unassuming building that houses seven rooms filled with the Montana Entomology Collection, some specimens dating back over 100 years. Within those rooms is an ongoing project to document the species of bees native to Montana.

The Wild Bees of Montana project, slated to take 15 years to complete, is in its fifth year. The bees collected range in size from no bigger than the head of a pin to roughly the size of a half-dollar.

“I think nowadays a lot of people probably think there’s not a lot left to be discovered. And I feel like my mind has been blown every time we find something, a new genus, or a new species in the state that I’ve never seen before,” said Casey Delphia, associate curator for the entomology collection and chief taxonomist on the wild bee project.

Delphia said she’ll often get asked if Montana’s wild bees are in decline when giving educational talks. With limited data on the bees in the state prior to their project, there isn’t enough information to give an answer, she said.

“We don’t even know what we have here,” she told the Bozeman Daily Chronicle. “So, the first thing is to figure out what’s here, this baseline data. Then in the future, we’ll have this dataset to refer back to to see if potential species are in decline.”

Michael Ivie, curator of the Montana Entomology Collection, said the project needs at least 15 years to complete because of how large Montana is, how undocumented bees have been to date, and the limited number of people able to do the taxonomy and identification of the collected bees.

In 2014, the group received funding to document the native bumblebees of Montana. Ivie said that project was so well received that they launched the Wild Bees of Montana project with additional funding from the Montana Department of Agriculture.

“If you looked at the scientific literature distribution maps, you’d think Montana doesn’t have any bees but what we’re finding is, well, we’re even surprised at how many we’re finding,” Ivie said.

When the project first started, there were 250 known wild species of bees in Montana.

Ivie estimated they would find around 400-500 species native to Montana. But as the project has gone on and the bee bodies rolled in, he’s moved that estimate up to 750-1,000 native species of wild bees in the state.

“I’m astounded at what we’re picking up, and I had no expectation that this would actually go this high,” Ivie said.

The lack of information on Montana’s bees is due to a few reasons, Ivie and Delphia said, including the lack of trained taxonomists and researchers to do the work.

The project has found that there are areas of the state, particularly eastern Montana, that are poorly documented when it comes to native bee species. Montana is also in a unique position, the research duo said, because it’s a place where east coast and west coast bees are present.

“Eastern Montana has a lot of species that are not expected to be in Montana at all. There are things that come from the south. There are alpine bees coming down from the Arctic. Pacific Northwest bees coming into western Montana,” Ivie said. “Montana is far more diverse.”

A graduate student involved in the project recently spent three days in the southern Wolf Mountains in the southeastern corner of the state. During that time, she collected over 150 species of bees.

“That’s probably half of what’s there,” Ivie said. “But we went from not a single record of any kind of bee in the mountain range.”

Delphia and Ivie said it’s important to make the distinction between honeybees — which many people think of when thinking about bees — and wild bees native to Montana.

“We have two managed bees that are basically livestock and it’s the honeybee and the alfalfa leaf cutter bee. They are European species that are used to produce products and agriculture,” Ivie said. “So, they’re the cows and sheep of the bee world.”

“If something were to happen, what are our alternatives? And then people started going oh wait, we have these native bees what’s going on with them. Oh no, they’re also in decline because we’ve kind of been ignoring them all this time while we were focused on this other bee,” she said.

The work also wouldn’t be possible without the help of a network of researchers and amateur collectors who contribute to fieldwork, Delphia and Ivie said.

In the field, bees are collected using a dish soap filled bowl. From there, each specimen will be labeled, including its exact location and date it was found. The data is uploaded into a spreadsheet that will hold the list of Montana’s wild bees.

“It’s a very long path to go from a field sample to a properly, museum quality specimen,” Delphia said. “… Part of the idea of what we’re doing is that these specimens are going to be available hundreds of years into the future, when we’re all dead.”

In addition to collecting and identifying wild bees, Delphia, who recently had a bee species named after her, also searches through historical literature and publications to see what species have previously been found in Montana.

This summer, the researchers and amateur collectors will continue gathering specimens from around the state in hopes of having a more complete picture of Montana’s wild bees.