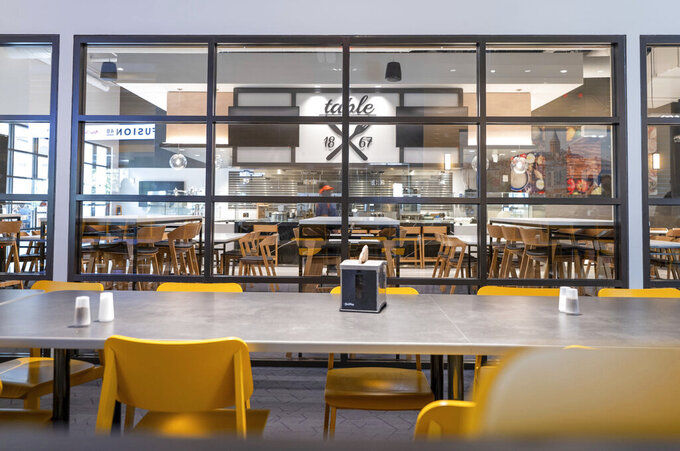 Anthony Zilas, ASSOCIATED PRESS
Table 1867 is one of several new restaurants at the remodeled Illinois Street Residence Hall dining area, at the University of Illinois, in Urbana, Ill. (Anthony Zilas/The News-Gazette via AP)

URBANA, Ill. (AP) — If the University of Illinois is going to make one of the largest dining halls in the nation, it better have some school spirit. Maybe some Block I pasta?

Sure enough, one of the creative flairs that made it into the $73.5 million expansion of the dining hall at the Illinois Street Residence Halls: an advanced pasta-cutting machine imported straight from Italy, where semolina flour and water squeeze through an I-shaped template.

The campus’s new flagship dining hall seats up to 1,385 at its nine themed “micro-restaurants” — from demonstration kitchen Table 1867 (named for the year the UI was founded) to the eastern hemisphere appeal of Fusion 48 (the same number of Asian countries in the United Nations).

That’s nearly twice the seats it had pre-makeover, which is now enough for the UI to stake its claim as the largest non-military college cafeteria in the U.S.

Every installation in the three-year project is imbued with a few layers of artistic significance, meant to resonate with different demographics of students.

The dining staff visited over 50 restaurants for inspiration; the dining hall’s 85 full- and part-time staff and 300 student employees now serve the results to the 4,000-plus visitors that flood it each day.

The Grains and Greens installation near the entrance serves custom bowls, salads and soups, modeled after a popular metro restaurant.

Then there’s breakfast spot Rise and Dine, with a butcher-block tabletop made by John Boos & Co. in Effingham; and Café la Crumb, featuring pastries and brew, with the theme “Coffee is Life and Life is Good” emblazoned on an adjacent wall.

Inclusive Solutions is the campus’s only dining venue dedicated to allergen-free cooking, where students with certain food sensitivities work directly with dining staff to pick out their meals. Nothing in the “top eight” food allergies — soybeans, peanuts, milk, wheat, eggs, fish, shellfish, tree nuts — makes it past the register.

The Grillworks restaurant is adorned with Edison light bulbs and what Cox calls “Grandma tiling,” meant to mimic the comfort of a classic American dining experience. Its smoker can prepare up to 400 pounds of meat at a time.

Diners can also catch a mix of international cuisine, including Central and South American food, at Latitude, featuring a tortilla machine and decorative acrylic waves, and a table made at UI Facilities and Services’ mill shop.

A cafe and mini-convenience store with engineering-inspired names InfiniTEA and Terrabyte, frequently field students flowing in from the hall’s Green Street entrance.

“Even being here for a year and a half, I still get lost sometimes,” Cox said. “To know that still happens to me is a very positive sign for students, because it’s going to take them a full semester to get used to everything and try everything.”

The new dining facility had its soft opening last fall, with far fewer services available. COVID-19 restrictions meant in-person dining was limited and not every micro-restaurant got a proper opening.

Carrying over one novel tradition from last year, UI dining facilities have begun implementing a to-go program at the remodeled dining hall and three other locations.

For a one-time payment of $5, students, staff and members of the public can rent a plastic to-go box and fill it with whatever they want from the dining halls at ISR and Ikenberry Commons.

The Lincoln Avenue and Pennsylvania Avenue dining halls make the to-go boxes available for anyone with an I-Card.

As long as the buyer keeps the box, he or she can return to refill it every day for the rest of the academic year.

Student feedback guides some of the internal design details, down to what kind of tables the facility uses.

“We used to try and get away from big, long tables, but we found at our other places that students were pushing tables together so they could eat with bigger groups,” said Mari Anne Brocker Curry, director of housing information and marketing for University Housing. “We thought they’d just want intimate seating, but they want both.”

Sure enough, that’s one resident’s favorite feature of the in-dorm eating space.

Fellow freshman Nico Halperin is understanding about the lines that form in the lunch rush hour, since “there’s a bunch of options, and they’re almost all good.”

“It’s pretty crazy, honestly. For a dining hall in a college dorm, it’s huge,” Garg said. “I’m a vegetarian, and I can still find options to eat.”