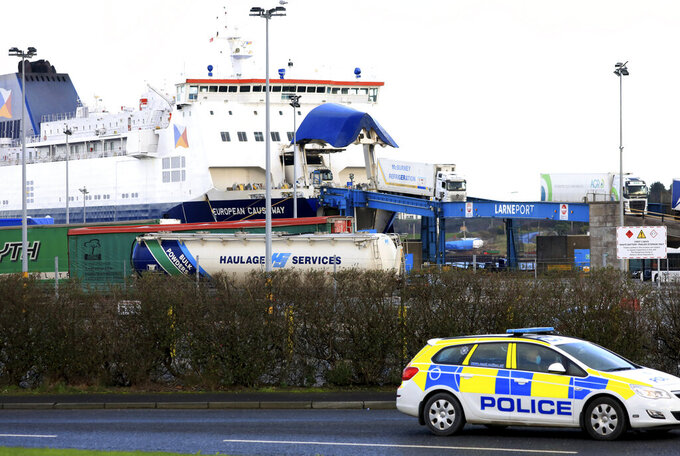 Peter Morrison, ASSOCIATED PRESS
FILE - In this file photo dated Friday, Jan. 1, 2021, lorries disembark a ferry from Scotland, after arriving at the P&O ferry terminal in the port at Larne, Northern Ireland. Outlawed Loyalist paramilitary groups in Northern Ireland have written to Britain's prime minister Thursday March 4, 2021, saying they are temporarily withdrawing their support for the historic 1998 peace accord because of disruption caused by new post-Brexit trade rules. (AP Photo/Peter Morrison, FILE)

LONDON (AP) — Outlawed Loyalist paramilitary groups in Northern Ireland say they are temporarily withdrawing their support for the historic 1998 peace accord because of the disruption caused by new post-Brexit trade rules.

The groups say they are not planning a return to violence, but the announcement underscores rising tensions over the trade deal agreed between Britain and the European Union days before the U.K. made an economic split from the 27-nation bloc on Dec. 31.

The Loyalist Communities Council, which represents several banned paramilitary groupings, said in a letter to Prime Minister Boris Johnson that the new trade rules undermined the basis of Northern Ireland’s 1998 Good Friday accord, and they would no longer support it until there was “unfettered access for goods, services, and citizens throughout the United Kingdom.”

The letter said opposition to the measures would remain “peaceful and democratic.”

Jeffrey Donaldson, a lawmaker with Northern Ireland’s Democratic Unionist Party, said Thursday that there was “no sense that loyalist paramilitaries were going to revert to violence in opposition to the Northern Ireland Protocol.”

The U.K.-EU trade deal establishes tariff- and quota-free exchange of goods but sets up veterinary and customs checks and other obstacles to the previously seamless commerce between Britain and the bloc. Contentiously, it also imposes new checks on some trade between Northern Ireland and the rest of the U.K.

Northern Ireland has special status because it shares a border with EU member state Ireland. An open Irish border has helped underpin the peace process built on the Good Friday accord, which ended decades of violence involving Irish republicans, British loyalists and U.K. armed forces, in which more than 3,000 people died.

But the new checks have unsettled the delicate political balance in Northern Ireland, a part of the U.K. where some people identify as British and some as Irish. They are opposed by pro-British Unionists, who say they drive a wedge between Northern Ireland and the rest of the U.K.

Northern Ireland businesses, meanwhile, say they are struggling to cope with the new red tape. To ease the burden, Britain announced Wednesday it was unilaterally extending until October a temporary “grace period” waiving checks on agri-food goods entering Northern Ireland. It had been due to end March 31.

That drew a rebuke from the EU. European Commission Vice President Maros Šefčovič, joint head of a U.K.-EU committee on Northern Ireland, said it was “a violation” of the legally binding Brexit divorce agreement.

“This also constitutes a clear departure from the constructive approach that has prevailed up until now,” Šefčovič said in a statement.

The U.K. government insisted it was merely taking “temporary technical steps … to provide more time for businesses such as supermarkets and parcel operators to adapt to and implement the new requirements.”

But Irish Foreign Minister Simon Coveney said the U.K.’s behavior showed the EU was dealing with a partner “that they simply cannot trust.”

Relations between Britain and the EU were rocky even before the U.K. made its final split from the bloc.

The U.K. outraged the EU during trade negotiations last fall, when it introduced legislation that would have given Johnson’s government the power to override part of the Brexit withdrawal agreement relating to Northern Ireland. The legislation was later dropped, but the damage was done.

The sensitivity of Northern Ireland’s status was underscored earlier this year when the EU threatened to ban shipments of coronavirus vaccines to Northern Ireland as part of moves to shore up the bloc’s supply. That would have drawn a hard border on the island of Ireland — exactly the scenario the Brexit deal was crafted to avoid.

Follow all AP stories on Brexit issues at https://apnews.com/Brexit