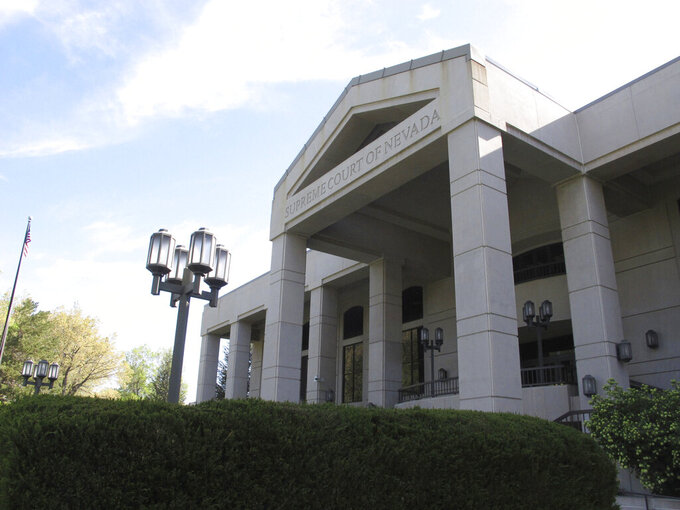 Scott Sonner, ASSOCIATED PRESS
FILE - The Nevada Supreme Court in Carson City, Nev. is shown May 2, 2018. Nevada's Supreme Court justices and secretary of state formally certified the results of the 2022 general election on Tuesday, Nov. 22, 2022, in the western battleground state where just over half of the ballots were cast by mail. (AP Photo/Scott Sonner, file)

RENO, Nev. (AP) — Nevada’s Supreme Court justices and the secretary of state formally certified the results of the 2022 general election on Tuesday in the western battleground state where just over half of all ballots were cast by mail.

With no debate or questions, the six justices signed the formal abstracts of the results during a brief gathering with outgoing Republican Secretary of State Barbara Cegavske, held in the old Supreme Court chambers of the state Capitol in Carson City.

“I now declare the official canvass of the 2022 general election adjourned and the governor's office to be notified to prepare the certificates of election,” she said.

It marked an anticlimactic ending to a spirited election that included a state Supreme Court legal battle over an attempted hand count of ballots in one rural county and unsubstantiated claims about fraud tied to mail-in ballots in several others.

Cegavske noted Tuesday that only seven of the county clerks and/or top election officials in the 17 counties would be continuing in those positions in 2023 after the others announced either their retirements or resignations.

Rural Douglas County south of Carson City was the last of Nevada's 17 counties to certify their votes during a formal canvass late Friday afternoon.

Nye County’s board of commissioners were among the others who unanimously certified the election results on Friday. The rural county of 34,000 registered voters made national news after conducting a controversial hand-count as a secondary method of counting the votes in addition to Dominion tabulators as election conspiracies ran rampant throughout the county.

The official vote canvass was from the tabulator count, while the county was unable to count all of the ballots through its hand-count by the certification deadline. Commissioners said they would have a “full review” of the hand count at a meeting next month

All four of Nevada's incumbent members of the U.S. House retained their seats, including Democrats Dina Titus, Susie Lee and Steven Horsford in southern Nevada where Republicans had hopes of flipping all three. Republican Rep. Mark Amodei was reelected in a sprawling, rural district in northern Nevada that includes Reno-Sparks, where no Democrat has ever won.