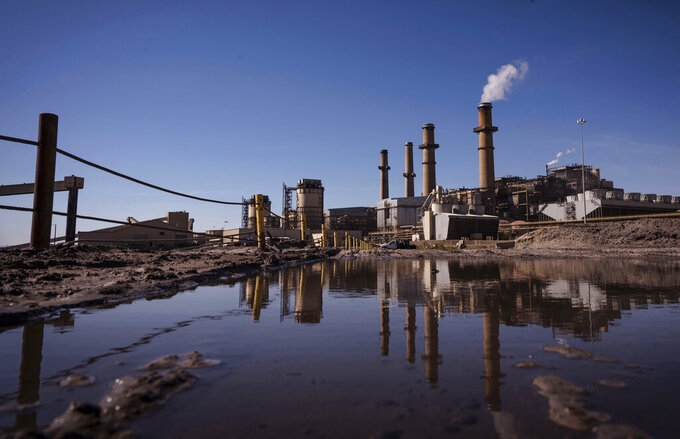 Chancey Bush, ASSOCIATED PRESS
FILE - The San Juan Generating Station near Farmington, N.M., is shown Wednesday, Sept. 28, 2022. The New Mexico Supreme Court has cleared the way for the state's largest electric utility to delay issuing rate credits related to the recent closure of a coal-fired power plant. State regulators in June had ordered Public Service Co. of New Mexico to begin issuing the credits since customers would no longer benefit from the San Juan Generating Station after its closure. (Chancey Bush/The Albuquerque Journal via AP, File)

ALBUQUERQUE, N.M. (AP) — The New Mexico Supreme Court is being asked to reconsider its decision allowing the state’s largest electric utility to delay issuing rate credits to customers that were prompted by the recent closure of one of the Southwest's largest coal-fired power plants.

The state attorney general and consumer advocates filed motions this week, arguing that delaying economic relief to customers from the closure of the San Juan Generating Station in September undermines a New Mexico law that guides the state's transition away from electricity generated by fossil fuels.

Regulators in June had ordered Public Service Co. of New Mexico to begin issuing the credits since customers would no longer benefit from the San Juan plant. The utility challenged the regulatory order and requested a stay, which the court granted earlier this month.

The group New Energy Economy in its motion contends PNM is violating the most fundamental principle of utility regulation — that a utility cannot collect money from ratepayers for assets that are not providing service.

“This is a significant and unjust imposition on ratepayers, who must continue to pay PNM what is essentially ‘free money’ for the duration of this appeal or, according to PNM, until it chooses to initiate its next rate case, which may be years after this appeal is concluded,” New Energy Economy said in a brief.

The Supreme Court has yet to decide the merits of the case, and it’s unclear how soon it could consider the motions filed this week.

Consumer advocates also raised concerns that allowing the utility to delay the rate credits from the San Juan plant could set precedent for PNM delaying credits related to its divestment of shares in an Arizona nuclear power plant.

The utility has argued that the stay in the San Juan case should remain in place, saying the cost of doing business has gone up and that delaying credits would mean smaller rate increases for customers in the future.

New Mexico's Energy Transition Act was meant to ease the economic fallout of closing the coal-fired power plant near Farmington and establish a trajectory for ensuring a zero-carbon standard for investor-owned utilities by 2045 and rural electric cooperatives by 2050.

While PNM has stated it will meet the goal by 2040, there already have been delays of planned solar and battery storage projects that were supposed to replace the capacity lost with the closure of San Juan. The utility has blamed global supply chain problems and has acknowledged challenges of meeting customer demands in 2023 and 2024.

Small stated the rate credits in question would offset increases to customer bills that PNM is now charging through its fuel and purchased power cost adjustment clause, which allows for quarterly increases in electricity rates to recover funds from purchasing power in wholesale markets and fuel for power plants.

The testimony of an energy consultant included with the motion shows PNM increased rates twice since July under the adjustment clause and that another increase was anticipated in January. The filing suggests PNM's financial interests could still be protected if the court were to lift the stay.