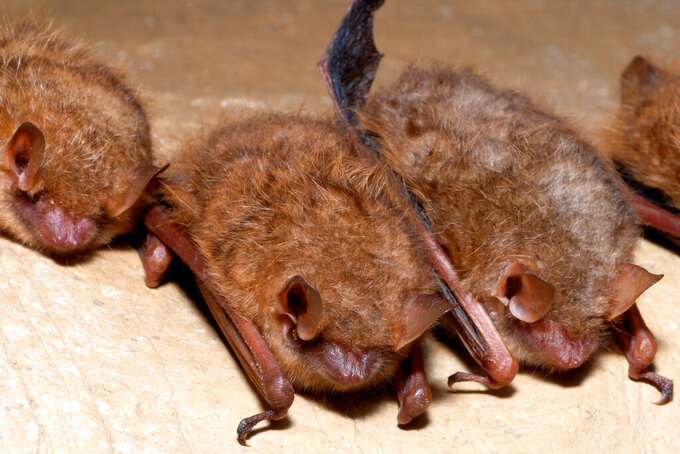 Uncredited, ASSOCIATED PRESS
FILE - This photo provided by the U.S. Fish and Wildlife Service in September 2022 shows tricolored bats. What tricolor bats lack in size, they make up for in their important role in insect control and pollination. The bats’ range includes Maryland and the Eastern Shore. But their survival is being threatened by biological and environmental factors. On Sept. 13, 2022, federal officials announced plans to list the animal as endangered. (U.S. Fish and Wildlife Service via AP, File)

SALISBURY, Md. (AP) — What tricolor bats lack in size, they make up for in their important role in insect control and pollination. But their survival is being threatened by biological and environmental factors.

The tricolor bats’ range includes Maryland and the Eastern Shore. They weigh only 6 grams, with a body length of just slightly over 3 inches. Despite their diminutive size, they serve a big role in pest control by eating a number of insects that endanger crops. For an animal weighing roughly the same as a quarter, it’s one of the most prolific natural control measures of grain moths and beetles.

It has distinct tricolored fur that appears yellowish-brown and is dark brown at the base, pale in the middle and dark at the tip. Its lifespan of a mere four to eight years makes it all the more vital that its hibernation not be disturbed.

Formerly known as the eastern pipistrelle, it is the smallest bat in Maryland. The bat can be found east of the Rocky Mountains in 39 U.S. states, including Delaware and Virginia, and parts of Canadia, Mexico, Guatemala, Honduras, Belize and Nicaragua.

What is killing tricolor bats?

The most serious threat to tricolor bats is white-nose syndrome, but that’s not the only factor that has precipitated anywhere from an 80% to 100% decline in populations in some areas, depending on the season.

“The species used to have one of the highest numbers of hibernating bats in the state as well as high numbers in the summer. But now they’re in much more limited numbers due to white-nose syndrome and wind-related mortality,” said Dana Limpert, eastern region ecologist for Wildlife and Heritage Services in the Maryland Department of Natural Resources.

White-nose syndrome results when a European-based fungus grows in the caves and mines where the bats hibernate. That fungus eventually gets on the animal itself, causing it to disrupt its hibernation at the cost of gaining the necessary fat stores needed to survive the coming season. It has led to many bats leaving hibernation early without the necessary strength to survive.

Research into artificial hibernating structures that have been decontaminated from the fungus may present a sustainable solution considering they would use those structures anyway. Although in its early stages, results have been positive.

According to Lampert, land-based wind turbines create a less consistent air pressure when spinning at a certain speed, causing passing bats to have their lungs explode. It is a condition common to a number of other bat species as well. The remedy is regulating the speed at which such turbines can rotate.

Also noted as factors by U.S. Fish and Wildlife are changes in temperature and precipitation, include disturbance to bats in their roosting, foraging, commuting and wintering habitats.

How are tricolor bats tracked?

The state’s Department of Natural Resources contends a sharp decline in population strongly indicates tricolor bats might not be using their traditional caves and mines anymore.

“Being so small, we can’t put radios on them to track where they’re roosting. What we have done is some acoustic work to locate their echolocation calls and then we can classify that,” Lampert said. “With tricolor bats, they’re very distinctive calls.

“The work we’ve done in the summer showed there’s been a decrease of 80% or more,” Lampert said.

In terms of the white-nose syndrome, some research indicates some tricolor bats can recover from being covered in the fungus. Yet that hasn’t stopped Maryland from already listing them as a state-endangered. Bolstered by proposed federal endangered species protection, the fight to ensure a future for tricolor bats could get easier.

“One thing (federal protection) would do is take a research to create habitat management recommendations for winter and summer. That’s mainly forest, so anything related to cutting of trees near caves or mines would have to go through the U.S. Fish and Wildlife Service,” Lampert said.

What is the latest on federal protection?

Tricolored bats are the smallest species of bat native to the Eastern U.S. with adults weighing only 0.2 to 0.3 ounces, or roughly the weight of a quarter. White nose syndrome has contributed to a 97% loss of tricolored bat populations in the US to date.

In September, the U.S. Fish and Wildlife Service announced a proposal to list the tricolored bat as endangered under the Endangered Species Act. The determination was announced under auspices that the species faces extinction due primarily to the range-wide impacts of white-nose syndrome, and a deadly disease affecting cave-dwelling bats across the continent.

“Bats are essential for healthy ecosystems and contribute at least $3 billion annually to the U.S. agriculture economy through pest control and pollination. The growing extinction crisis highlights the importance of the Endangered Species Act and efforts to conserve species before declines become irreversible,” a release by the federal service said following the announcement.

According to the federal office, the proposal to list the tricolored bat comes after an in-depth review found that the species has declined so dramatically across its range that it now meets the definition of endangered under the current law.

“The Service has a strong foundation in place for working with stakeholders to conserve bats while allowing economic activities within the range to continue to occur, and will continue to build on these in light of the tricolored bats endangered status,” the statement said.

As an example, the federal department cited the use of habitat conservation plans in wind energy projects so as to move forward after minimizing and mitigating their impacts on tricolored bats.

“White-nose syndrome is decimating hibernating bat species like the tricolored bat at unprecedented rates,” said Martha Williams, service director for the agency. “Bats play such an important role in ensuring a healthy ecosystem. The Service is deeply committed to continuing our vital research and collaborative efforts with partners to mitigate further impacts and recover tricolored bat populations.”

The Center for Biological Diversity was among the groups with the strongest support for the decision, noting much of the population decrease trends as to why.

“It’s baffling that the Fish and Wildlife Service acknowledged that habitat loss is one of the biggest threats to the tricolored bats’ survival but decided not to designate any critical habitat for them. These bats urgently need their homes protected to stop them from going extinct,” said Will Harlan, a scientist at the center.