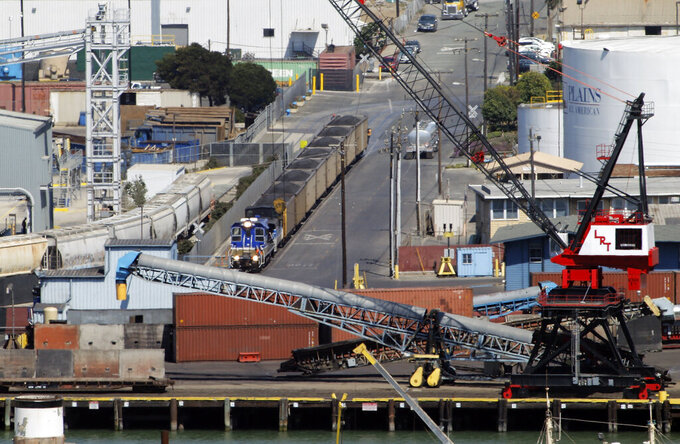 Carlos Avila Gonzalez, ASSOCIATED PRESS
A train loaded with coal approaches the Levin-Richmond Terminal in Richmond, Calif., on Thursday, July 23, 2015. The company will be required to stop handling and storing coal and petcoke products at the terminal starting on Dec. 31, 2026, under a settlement reached Friday, Nov. 12, 2021, with the city of Richmond. (Carlos Avila Gonzalez/San Francisco Chronicle via AP)

SACRAMENTO, Calif. (AP) — A private port operator in the San Francisco Bay Area that stores coal from Utah before it's shipped to Asia has been given until 2027 to continue those operations under terms of a settlement.

Officials in Richmond, where the port is located, agreed to the deal with the Levin-Richmond Terminal Corp. that runs the port, Utah-based coal company Wolverine Fuel Sales, the state of Utah and Phillips 66, which exports petroleum coke through the port. “Petcoke" is a byproduct of oil refining.

The Richmond City Council passed an ordinance last year banning the handling and storage of coal and petcoke within the city by January 2023. The move, driven by concerns about possible health complications from coal dust, prompted lawsuits in federal and state courts from the three companies and Utah, which all argued it was unconstitutional. The settlement keeps the law in place but gives the companies nearly four more years to comply.

Utah said in legal filings the terminal “sustains a significant component of Utah’s economy." The state supports the settlement because it keeps the port open to the coal business for longer, said Utah Assistant Attorney General Anthony Rampton.

“This just gives us more time to make this transition," he said.

Environmental groups that joined Richmond to fight the lawsuits cheered the settlement as a win for communities that want to better control health dangers for their residents.

“It’s a blueprint for other cities and counties in California to address the public health threat that may be presented by coal and petcoke handling,” said Aaron Isherwood, managing attorney with the Sierra Club, which intervened in the case,

The settlement, reached Friday, gives the companies until Dec. 31, 2026, to end the storage and handling of coal at the facility. During that period the companies must follow enhanced dust control measures. The City Council must approve the settlement by next February for its provisions to take effect.

Concerns about climate change have dampened demand for coal in the U.S. Coal-producing states such as Utah are shipping it to Asia through West Coast ports, a move that has faced resistance from environmental advocates and elected officials, mostly Democrats.

In the San Francisco Bay Area, the Levin-Richmond Terminal and the Port of Stockton are the main places through which coal is shipped. A long-running effort to build a terminal in Oakland for Utah coal has been stymied by opponents.

The ports in the San Francisco Bay Area accounted for about 3% of total U.S. coal exports in the first half of 2021, according to data from the U.S. Energy Information Administration.

Handling and storage of coal makes up about 65% of the Richmond terminal's business, while petcoke exported for use to manufacture aluminum and other products makes up another 15%, according to legal filings. It also handles recyclable materials. The company has about 60 employees.

Settlement talks began this February, with the eventual agreement providing more time for the companies to transition to handling other commodities at the terminal.

The agreement is intended to “strike a proper proper balance between protecting the public from the health hazards of coal and petroleum coke storage and handling, while also protecting existing jobs and providing sufficient time for businesses to transition," according to the settlement.

James Holland, vice president of facilities, equipment and environment, and Patrick O’Driscoll, chief operating officer for the Levin-Richmond, did not immediately respond to an email seeking comment about whether the company has plans for how to use the terminal instead.

Wolverine Fuels, meanwhile, argued in court that an inability to use the Richmond port would significantly impact its business by requiring longer transport for the coal, possibly to ports in Mexico. Most of the company's coal goes to Japan. The company argued that longer transport routes for its product would result in more greenhouse gas emissions.

Phillips 66 is considering transitioning its San Francisco Refinery to biofuels.