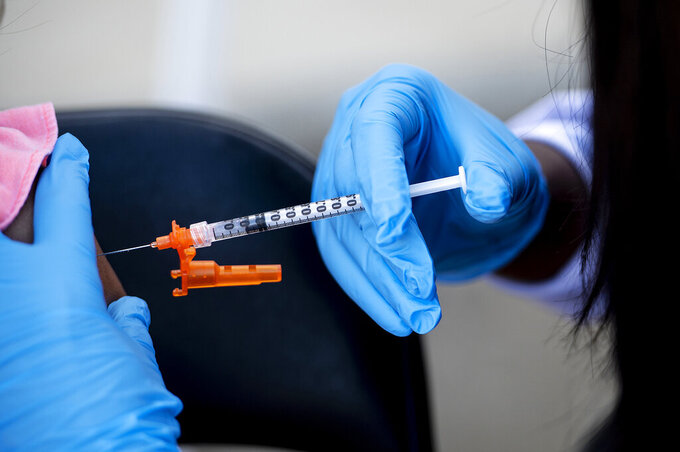 Andrew Kuhn, ASSOCIATED PRESS
A COVID-19 vaccine is administered to a patient at a vaccination clinic at Frank Sparkes Elementary School in Winton, Calif., on Wednesday, Dec. 1, 2021. (Andrew Kuhn/The Merced Sun-Star via AP)

LOS ANGELES (AP) — California on Thursday reported its second confirmed case of the omicron COVID variant in as many days.

A fully vaccinated Los Angeles County resident is self-isolating after apparently contracting the infection during a trip last month to South Africa, where the variant was first identified a week ago, the Los Angeles County Department of Public Health announced.

The person's symptoms are improving without medical care and some people who were in close contact with the traveler have tested negative for the virus and don't have any symptoms, the department said.

The U.S. recorded its first confirmed omicron infection on Wednesday in a San Francisco resident who had recently traveled to South Africa and developed mild coronavirus symptoms after returning on Nov. 22, authorities said.

State health officials said they are increasing COVID-19 testing at California’s airports for arrivals from countries identified by the U.S. Centers for Disease Control and Prevention as being areas where the newly identified variant is spreading. But Gov. Gavin Newsom said Wednesday that he doesn't not anticipate that the most populous state will impose another stay-at-home order or other new coronavirus restrictions.

Meanwhile, several more U.S. cases were reported Thursday — five in the New York City area and one each in Minnesota, Hawaii and Colorado — under circumstances suggesting the variant has begun spreading in the country.

Much is unknown about omicron, including whether it is more contagious than previous versions, makes people sicker, thwarts the vaccine or more easily breaks through the immunity that people get from a bout of COVID-19. World health authorities have yet to link any deaths to omicron.

For now, the extra-contagious delta variant accounts for practically all cases in the U.S.

California has seen more than 4.8 million confirmed cases of the coronavirus and nearly 74,000 related deaths since the pandemic began last year, with the virus claiming 54 lives on average each day, according to the state Department of Public Health.