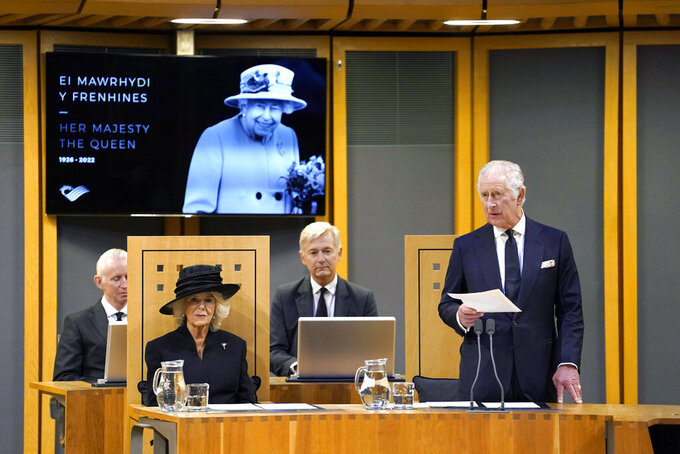 Andrew Matthews, ASSOCIATED PRESS
King Charles III, right, speaks with Camilla the Queen Consort at left, after receiving a Motion of Condolence at the Senedd, following the death of Queen Elizabeth II, in Cardiff, Friday, Sept. 16, 2022. King Charles III and Camilla, the Queen Consort, arrived in Wales for an official visit. The royal couple previously visited to Scotland and Northern Ireland, the other nations making up the United Kingdom, following the death of Queen Elizabeth II at age 96 on Thursday, Sept. 8. (Andrew Matthews/Pool Photo via AP)

TOKYO — Japanese Emperor Naruhito and Empress Masako left for Britain on Saturday to attend Queen Elizabeth II’s funeral to pay respects to her and the British royal family who considered as a model for Japan’s monarchy in modern history.

The decision for the emperor and empress to attend the queen’s funeral underscores the importance and the deep bond between the royal families. Traditionally, a Japanese emperor stays away from funerals except for those of their own parents because of a cultural belief based in the Shinto religion that considers death impure.

Former Emperor Akihito, as crown prince, attended the Queen’s 1953 coronation and her Diamond Jubilee in 2012. Queen Elizabeth visited Japan in 1975.

Naruhito and Masako’s trip to Britain is their first as the Emperor and Empress. The Queen’s invitation for them to visit following Naruhito’s 2019 ascension to the Chrysanthemum Throne had to be postponed due to the pandemic.

— What to know about the queen’s lying in state

— Reflections from the queue to mourn the queen

— In Hong Kong, public grief over queen doubles as dissent

Charles, Princess Anne, Prince Andrew and Prince Edward stood with their backs to the flag-draped coffin of Queen Elizabeth II, their heads bowed.

Members of the public who had lined up for hours to pay their last respects continued to file past as the royals stood vigil in the historic event.

On Saturday, the queen’s eight grandchildren will hold a similar vigil.

LONDON — The line organized by British authorities for people to view Queen Elizabeth II’s coffin as she lies in state has reopened after being closed for more than seven hours due to a surge in numbers.

But officials said Friday afternoon that people may have to stand in line for more than 24 hours before reaching Westminster Hall.

And they say that it will be cold during the night.

The line was about 5 miles (8 kilometers) long, snaking along the banks of the River Thames.

Authorities laid on more than 500 portable toilets, while around 1,000 stewards and marshals were on duty at any given time.

Hundreds of thousands of people are expected to pay their respects before Monday’s state funeral.

ISTANBUL — Planeloads of Turkish carnations are headed to the United Kingdom for Queen Elizabeth II’s funeral next Monday.

Flower producers in southern Turkey are working to meet high demand for the event in London.

Turkish Cargo said Friday that after the queen’s death last week orders for flowers shot up by 90%. Suppliers chose air transport over trucks to cope with demand and deliver on time.

The cargo company said more than 500,000 flower stems, weighing around 13 metric tons, are being sent to London.

Turkey is a major exporter of cut flowers, principally carnations, to Europe.

As they left Cardiff Castle on a visit to Wales on Friday, the royal couple passed by the official mascot of the Third Battalion of The Royal Welsh.

The goat is known as Lance Corporal Shenkin IV. The furry white goat, which has metal tips on its horns, has its own Twitter account and Facebook page.

King Charles appeared to share a joke about the military mascot with his wife.

LONDON — Soccer great David Beckham has joined the miles-long queue of people waiting to pay their respects to Queen Elizabeth II as she lies in state.

People spotted the former England captain in the line of mourners near Britain’s Houses of Parliament at lunchtime on Friday. He is believed to have joined the queue at 2 a.m. and to have lined up for more than 10 hours with thousands of others.

Officials temporarily halted people joining the back of the line on Friday after a park at the farthest end became full. People who arrived were directed to holding areas and slowly allowed to join the queue.

The queen is due to lie in state at Westminster Hall in Parliament until Monday morning, when her funeral will be held at nearby Westminster Abbey.

CARDIFF, Wales — King Charles III has spoken of his late mother’s love of Wales as he addressed the Welsh parliament.

Charles is wrapping up his tour of the four nations of the U.K. with a visit to Cardiff, following previous trips to Scotland and Northern Ireland.

He told members of the parliament, or Senedd, on Friday that Wales “could not have been closer to my mother’s heart.”

He said he felt “immense gratitude for the privilege” of serving for decades as Prince of Wales, the title traditionally bestowed on the heir to the throne. Prince William now has that title.

Charles said: “I am resolved to honor that selfless example, in the spirit of the words by which I have always tried to live my own life: Ich Dien, I Serve.”

The king and Camilla, the queen consort, were greeted by cheering crowds in Cardiff — and by a handful of anti-monarchy protesters. Some carried the flag of Owain Glyndwr, a medieval leader who was Prince of Wales before the title was taken by the English Crown after the English conquest of Wales in the 14th century.

CARDIFF, Wales — King Charles III has spoken in Welsh during a visit to Cardiff.

The new monarch addressed the Welsh parliament, called the Senedd, on Friday after receiving its condolences on the death last week of his mother, Queen Elizabeth II.

Before acceding to the throne, Charles was the Prince of Wales and often used a smattering of Welsh in official speeches after taking lessons.

Charles and Camilla, the Queen Consort, received a warm welcome in Cardiff. Schoolchildren squealed with excitement and waved Welsh flags, the crowds cheered, and there were shouts of “God save the king” as the royal couple greeted well-wishers.

The events ran later as King Charles prepared to visit Cardiff’s 2000-year-old castle, where the Welsh flag hung at half-staff.

LONDON — London police say Queen Elizabeth II’s funeral on Monday will be the largest single policing event the force has ever handled.

Metropolitan Police Deputy Assistant Commissioner Stuart Cundy said Friday that the massive police operation surpasses even the 2012 Olympics, which were held in the British capital, and the celebrations earlier this year of the queen’s 70 years on the throne.

“The range of officers, police staff and all those supporting the operation is truly immense,” he added.

Royalty and heads of state from around the world are expected to be among the 2,000 people attending the funeral service.

LONDON — British Prime Minister Liz Truss will hold one-on-one meetings with U.S. President Joe Biden and several other world leaders who are flying to London for the queen’s funeral.

Truss has been prime minister for just 10 days, and the start of her term has been upended by the queen’s death last week, which has put everyday politics on hold.

On Saturday, she is due to meet the prime ministers of Australia and New Zealand, Anthony Albanese and Jacinda Ardern, at the government’s Chevening country residence outside London.

VATICAN CITY — The Vatican says the Holy See’s foreign minister will represent Pope Francis at the funeral in London on Monday of Queen Elizabeth II.

Vatican spokesman Matteo Bruni said in a brief written statement Friday that Archbishop Paul R. Gallagher, who is secretary for relations with states and international organizations, would attend the funeral at Westminster Abbey.

Gallagher, a career diplomat, is a native of Liverpool in northwest England.

CARDIFF, Wales — King Charles III and Camilla, the Queen Consort, have arrived in Wales for an official visit.

They went Friday to a service at Llandaff cathedral in Cardiff.

They were later due at the Welsh parliament and Cardiff castle.

For more than 50 years up to his mother Queen Elizabeth II’s death last week, Charles was the Prince of Wales — a title that has now passed to his son, Prince William.

The royal couple previously visited to Scotland and Northern Ireland, the other nations making up the United Kingdom, following last week’s death of Queen Elizabeth II at age 96.

Later Friday, the new king is scheduled to receive faith leaders at Buckingham Palace in London before joining his siblings for a vigil around the queen’s coffin in Westminster Hall.

LONDON — All eight of Queen Elizabeth II’s grandchildren will stand vigil beside her coffin on Saturday as it lies in state at Westminster Hall.

William, who is heir to the throne, will stand at the head of the coffin and Harry at the foot. Both princes, who are military veterans, will be in uniform.

The ceremony will follow a vigil by the queen’s four children on Friday evening.

Hundreds of thousands of people are expected to pay their last respects by filing past the coffin during the lying-in-state, which began Wednesday and concludes Monday, the day of the queen’s funeral.

LONDON — People are being told not to join the line to view Queen Elizabeth II’s coffin after a surge in numbers.

British officials said Friday morning that the organized line was at capacity and no one will be allowed to join it for at least six hours.

The line stretched for 5 miles (8 kilometers) from Parliament to Southwark Park in south London.

People at the back of the line faced a 14-hour wait to reach the front.

The government says the park is now full and entry to the queue is being “paused.”

It said: “Please do not attempt to join the queue until it re-opens.”

LONDON — Geopolitics is intruding in the somber pageantry surrounding the Queen Elizabeth II’s death amid a reported spat between British and Chinese officials.

A report Friday said that a Chinese delegation has been barred from visiting the historic hall in Parliament where the queen is lying in state.

The con text is that the Chinese ambassador to the U.K. has been banned from Parliament for a year after Beijing sanctioned seven British legislators last year for speaking out against China’s treatment of its Uyghur minority in the far-west Xinjiang region.

The office of House of Commons Speaker Lindsay Hoyle declined to comment on the report in Politico of the Chinese delegation being barred from visiting the queen’s coffin at the Houses of Parliament.

In Beijing, Chinese Foreign Ministry spokesperson Mao Ning said she had not seen the report, but said that as host of the queen’s funeral, the U.K. should “follow the diplomatic protocols and proper manners to receive guests.”

A Chinese delegation is expected to attend the queen’s funeral on Monday, which is in Westminster Abbey rather than in Parliament. Organizers of the funeral have not published a guest list and it is unclear who from China might attend.

LONDON — Thousands of mourners are standing in line for at least 14 hours to see Queen Elizabeth II’s coffin while she lies in state in London.

Authorities said Friday the designated line was about 5 miles (8 kilometers) long, snaking along the banks of the River Thames, with more than 500 portable toilets available and some 1,000 stewards and marshals working at any given time.

Preparations are continuing for the queen’s state funeral in the British capital on Monday, when royalty and heads of state from around the world are expected to be among the 2,000 people attending the service in Westminster Abbey.

King Charles III and Camilla, the Queen Consort, were due to visit Wales on Friday.

They were due in Cardiff for a service at Llandaff cathedral, later going to the Welsh parliament and Cardiff castle.

They previously visited to Scotland and Northern Ireland, the other nations making up the United Kingdom.