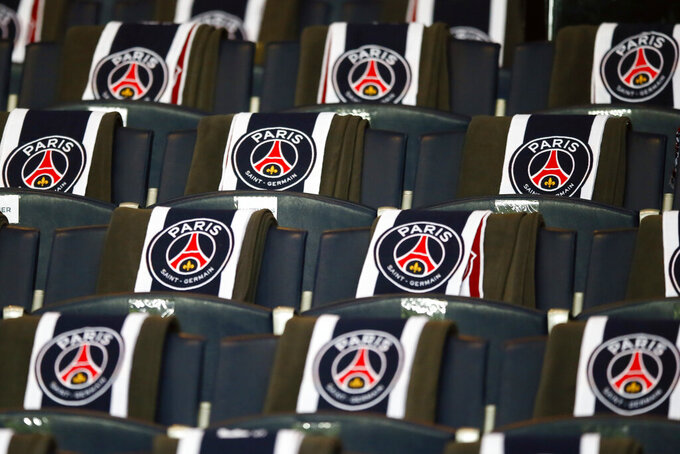 Francois Mori, ASSOCIATED PRESS
FILE - The logos of the Paris Saint Germain are displayed on the seats of the VIP stands prior to the Champion's League round of 16, first leg soccer match between Paris Saint Germain and Barcelona at the Parc des Princes stadium in Paris, Tuesday, Feb. 14, 2017. Paris Saint-Germain has defended its use of chartered flights rather than more ecological trains after an executive for France's high-speed rail network called out the club for flying its players on a short-haul to Nantes Saturday Sept.4 2022. (AP Photo/Francois Mori,File)

PARIS (AP) — Paris Saint-Germain has defended its use of chartered flights rather than more ecological trains after an executive for France's high-speed rail network called out the club for flying its players on a short-haul to Nantes this past weekend.

Alain Krakovitch, the director of the French rail company's TGV-Intercity service, noted in a tweet that the network's high-speed trains can travel the roughly 380 kilometers (240 miles) from Paris to the western city in just under two hours.

He retweeted video apparently posted by a PSG player of team members aboard a flight to the Ligue 1 match on Saturday night. Paris beat Nantes 3-0.

Addressing PSG, Krakovitch wrote: “I re-re-renew our proposition of a TGV offer adapted to your specific needs.”

In response to questions from The Associated Press, PSG said there weren't late-night TGV trains it could have taken back to Paris after the match, which would have forced the team to spend the night in Nantes had it wanted to ride the rails back to the French capital the next morning.

A club spokesman said PSG is “not at all closed to the idea of taking the train if all the conditions are met” and that it has had talks with the French rail company SNCF. But the club said chartered flights are more flexible and that it also has to consider players' and public safety when taking public transport.

The spokesman said the team is making increasing use of buses for short trips.

Krakovitch's tweet, which caught the attention of French media, comes as the French government is urging companies, households and other consumers to save energy amid a fear of shortages stemming from tensions with Russia over the war in Ukraine.