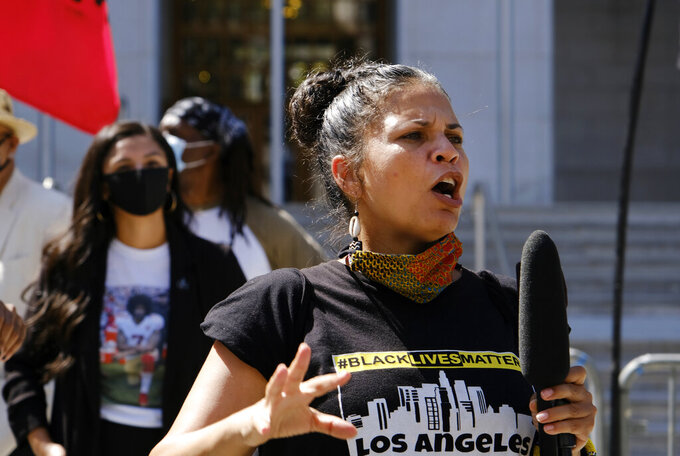 The teenagers, aged 13 to 16, connected over the Discord chat platform and are suspects in more than 30 bomb threats and so-called “swatting” incidents across the country, according to the Los Angeles Police Department. Swatting refers to a phony emergency call made to attract police to a particular address without cause.

They are accused of perpetrating two fake swatting calls — one this past September and another in August 2021 — at the LA home of Melina Abdullah, co-founder of BLM-LA and a Cal State Los Angeles professor.

Police did not identify Abdullah by name as a victim of the teens, but listed her block as the location of two of the swatting incidents.

Los Angeles police said Friday that the teens were behind hoaxes dating back to July 2020 that targeted “other online persons, video gamers, activists, schools, airports, houses of worship, entertainment venues and memorial parks.”

Police will present a case to Los Angeles County prosecutors for criminal conspiracy and creating a false emergency charges and plan to request a hate crime enhancement in connection with the incidents at Abdullah's home.

“Some of the language used in the swatting incidents and a review of the subjects’ online activities reflect a racial motivation theme to a number of these swatting attacks,” the LAPD said in a news release.

Two of the teenagers live in Ohio and New York, where authorities served search warrants on Tuesday. The third teenager is a U.S. citizen who is currently living in Cyprus.

Abdullah, a prominent police critic, has previously condemned the LAPD responses to her home, which included armed SWAT officers surrounding her house and ordering her to come outside through a loudspeaker. She has a pending lawsuit against the department for its actions during the Aug. 12, 2020, swatting.

Abdullah told the Los Angeles Times on Friday that she doubted the LAPD's information regarding the teenagers. She also said the teenagers' alleged actions do not excuse the police officers' tactics at her home.

“Even if what they’re saying is true, the police — LAPD — used this opening as an opportunity to attempt to terrorize me and my family,” Abdullah told the newspaper.

Abdullah, when reached by The Associated Press on Friday, said she would be putting out a statement on her social media.