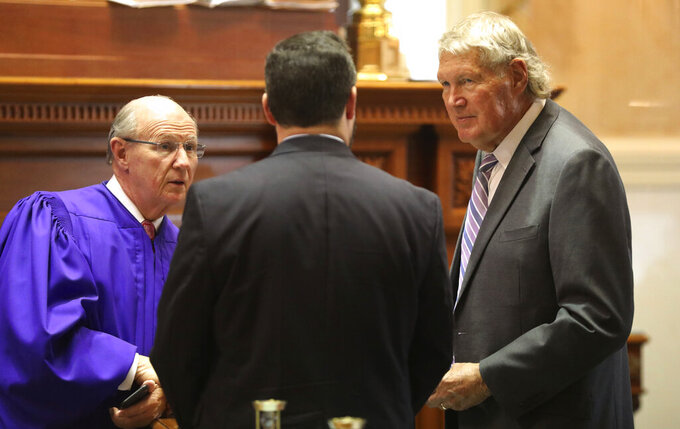 COLUMBIA, S.C. (AP) — The South Carolina lawmakers negotiating big gap s between the House and Senate versions of the state budget received a big gift Tuesday as the state's economy continued to do better than predicted.

South Carolina can now expect to have about $950 million more in its bank accounts by the end of June from taxes and other revenue than the state economists predicted in February, the South Carolina Revenue and Fiscal Affairs Office reported.

But the rosier predictions came with a warning. Economists say near 20% growth can't last forever and between the war in Ukraine, rising inflation and interest rates and other factors, a recession could be looming.

"With this new revenue we need to be cautious on how we spend it, if we spend it. And we need to have discussions about making sure we prepare for any downturn in the economy," said new Republican House Speaker Murrell Smith, who helped write his chamber's budget before taking up his new post this month.

The three House members and three senators negotiating the budget in a conference committee met Tuesday. They are not expected to meet again for two weeks, said Senate Finance Committee Chairman Harvey Peeler, adding he expected the negotiations to be long and involved.

“Our Statehouse is bursting with cash. Believe me, our neighbor’s house is not. And we need to keep that in mind in our budgeting," the Gaffney Republican said.

The two chambers come to the table about $1.3 billion apart with the biggest difference a $1 billion rebate senators want to send back to taxpayers.

Both sides have about $1 billion of cuts in income taxes, but the House phases it in over five years with $600 million of the cuts happening next budget year and with triggers to stop if economic growth slows. The Senate's full tax cut is immediate.

Other differences include the House proposing to raise the minimum a first-year teacher is paid from $36,000 to $40,000, while the Senate increases starting pay to $38,000.

To pay for the $1 billion rebate, the Senate cut some items in the House's budget, including money for roads and a $1,500 bonus for all state employees.

While the House seems to have fairly unanimous support for its plan, the several Republican senators felt the rebate was unwise and that money could have gone for infrastructure repairs and expansion in a rapidly growing state, like building Interstate 73 — a freeway connection from Interstate 95 to Myrtle Beach.

The House spending plan for the 2022-23 fiscal year also includes $236 million more in projects requested by individual lawmakers, like projects for the arts or downtown revitalization.

Revenues are growing by about 20% a month, well over the 5% which many times are considered optimistic predictions. If economists predicted 20% growth and the state's bank accounts grew by just 5%, that would be a $100 million miss each month, Rainwater said.

“Our growth rate has been vastly accelerated. It’s great news, but we don’t want to rely on double digit growth forever,” he said. “If we carry this too long and too many months, you could easily find yourself in a 400 or 500 million dollar hole.”

With interest rates likely to rise to fight inflation and signals on the horizon that a recession may be coming, Rainwater said he thinks South Carolina's economy is at its peak and revenues will slip going into next budget year.

“A year ago, we thought the peak was going to be last year," Rainwater said.

Rainwater said his economists hate missing their predictions by so much, but they would rather predict the budget has less money than more.

“We just want to remain cautious with the budget so promises aren’t over made,” he said.

South Carolina's budget for this fiscal year for the money controlled by state lawmakers is now expected to be about $12.8 billion. The budget a decade ago was around $6 billion.