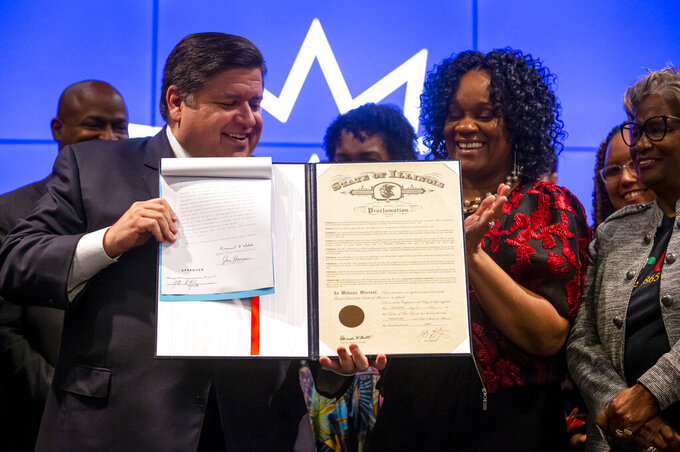 The new law making June 19 a paid holiday for state employees and public school educators takes effect next year and came the same day the U.S. House voted in favor of making Juneteenth a federal holiday. However, under the Illinois law Juneteenth will be a paid holiday only if it falls on a weekday. Since Juneteenth is on Sunday next year, the first paid state holiday will be in 2023, according to Pritzker's office.

Juneteenth marks the 1865 date when the last enslaved Black people learned from Union soldiers in Texas that they were free, more than two years after the Emancipation Proclamation was signed. The Abraham Lincoln Presidential Library and Museum in Springfield has displayed a rare copy signed by Lincoln and then-Secretary of State William Seward. The original is housed in the National Archives in Washington, D.C.

"It is our privilege as Illinoisans to house this great document and it is our sacred responsibility to keep its moral compass alive in our own times, especially as we become a leader in the nation in the depth of our recognition of this new Juneteenth state holiday,” Pritzker said at the signing.

While many states commemorate the ending of slavery, only some observe Juneteenth as an official holiday. The number has grown following last summer’s reckoning over racial injustice, most recently including Maine and Washington.

The federal bill, which cleared the House 415-14 on Wednesday, now goes to President Joe Biden’s desk to be signed into law.