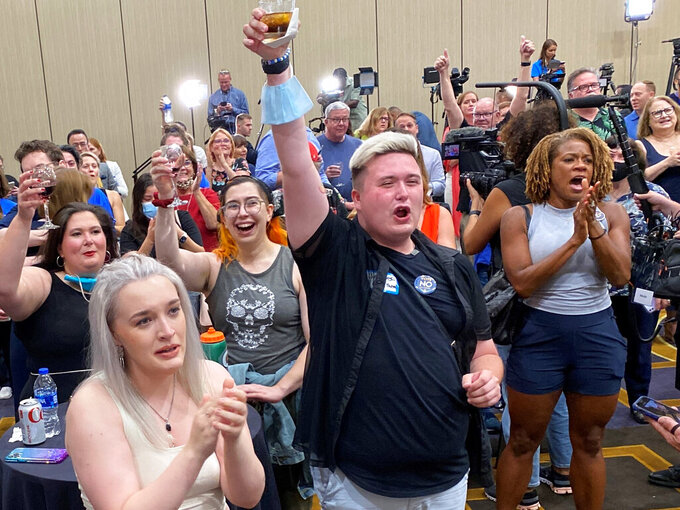 Angie Ricono, ASSOCIATED PRESS
People cheer at a watch party in Overland Park, Kansas, after learning that voters rejected a state constitutional amendment that would have allowed the Legislature to restrict or ban abortion, late Tuesday, Aug. 2, 2022. (Angie Ricono/KCTV5 via AP)

TOPEKA, Kan. (AP) — Kansas plans to do a partial hand recount that won't change the outcome of this month's decisive vote in favor of abortion rights after abortion opponents charged almost $120,000 to credit cards Monday to cover the cost.

The Kansas secretary of state's office said the recount will occur in nine of the state's 105 counties that account for more than half of the votes cast on the Aug. 2 abortion ballot question, including four of the state's five most populous counties. Voters who want to keep the abortion rights allowed under the Kansas constitution prevailed in eight of the nine counties.

The recount request came Friday from Melissa Leavitt, an election conspiracy promoter from Colby in far western Kansas, but Mark Gietzen, a hard-right anti-abortion activist from Wichita who also promotes election conspiracies, pledged to help pay for the recount. Gietzen used a credit card to pay for all but $1,500 of the costs, which Leavitt will cover.

Voters on Aug. 2 overwhelmingly rejected a proposed amendment to the Kansas Constitution that would have allowed the Republican-controlled Legislature to further restrict abortion or ban it. The “no” side prevailed by 18 percentage points statewide, or 165,000 votes. For the nine counties doing the recount, the margin was 31 percentage points.

There has been no evidence of significant problems with the election. Baseless election conspiracies have circulated widely in the U.S., particularly among supporters of former President Donald Trump, who has repeated false claims that he lost the 2020 election through fraud.

Leavitt initially requested a recount in all 105 counties and proposed using Gietzen’s “financial assets” for the required bond to cover the $229,000 in costs. Gietzen told The Associated Press he was offering his home as collateral. State Elections Director Bryan Caskey rejected that plan, saying the state would require cash, a check or credit card. He gave Leavitt until 5 p.m. Monday to find an alternative and told her that she could narrow her request to specific counties to lower the costs.

Leavitt did not immediately respond to a telephone message Monday evening seeking comment, but she has an online fundraising effort and had received more than $41,000 in donations as of Monday evening.

“We're getting a lot of donations in," Gietzen said. “We're fundraising a lot right now.”

Kansas law says the person seeking a recount pays for it unless it changes the outcome, in which case counties do.

The Kansas secretary of state's office says counties have five days, until Saturday, to finish their recount. State law contemplates starting the clock when a recount request is made — making the deadline 5 p.m. Wednesday — but Whitney Tempel, a spokesperson for the secretary of state's office, said it was trying to be “accommodating" and will ask the Legislature to rewrite the law next year.

Some counties didn't finish compiling their final results until Monday, the last day they could do so, because they were reviewing provisional ballots cast by voters when poll workers weren't sure they were eligible.

Douglas County in northeastern Kansas, which is home to the main University of Kansas campus, is one of the counties that will do a recount. Initial results showed 81.5% of voters had rejected the proposed abortion amendment. County Clerk Jamie Shew, an elected Democrat, said he made plans to bring in 18 to 20 people to do the recount and start Tuesday.

Other counties whose votes will be recounted are Sedgwick, home to Wichita; Johnson, in the Kansas City suburbs; Shawnee, home to Topeka; and Crawford, Harvey, Jefferson, Lyon, and Thomas, the only county among the nine where the proposed amendment passed.