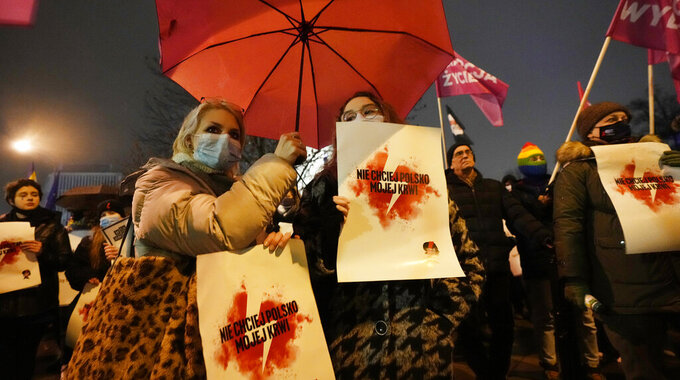 Czarek Sokolowski, ASSOCIATED PRESS
Women held signs saying "Don't ask for my blood, Poland," during a demonstration in front of the Polish parliament in Warsaw, Poland, Dec. 1, 2021. Poland's lawmakers have voted to reject a legislative proposal that would outlaw abortion as homicide and introduce prison sentences for terminating pregnancies. The bill calls for prison terms ranging from 5 to 25 years and in some cases life sentences. (AP Photo/Czarek Sokolowski)

WARSAW, Poland (AP) — Poland's ruling conservative party rejected a legislative proposal that would outlaw abortion as homicide in a parliament debate Wednesday arguing the proposal was extreme and “unacceptable” and could lead to social unrest.

The negative opinion from the Law and Justice party at the initial stage of work on the project suggests it will most probably be rejected in a vote Thursday and never become law. Most other political forces also dismissed the proposal, many calling it shameful.

The current proposal, by an anti-abortion group, Pro-Right to Life Foundation, calls for prison terms ranging from 5 to 25 years and in some cases life sentences for getting an abortion or assisting a woman to get one.

But Anita Czerwinska said the ruling party wanted it rejected on first approach, seeing it as “unacceptable” and likely to lead to “social unrest.”

“This is simple sabotage of the protection of life because you do not protect life by threatening women," Czerwinska said, adding that the proponents represented an "extremity."

Protests were held in Warsaw and some other cities as the debate got underway.

Abortions are now only permitted in the case of a crime, like rape or incest, of if the woman’s life or health is in danger. Last year, on the ruling party's motion, the constitutional court ruled against abortions of fetuses with defects, even those life-threatening.

In practice, Polish women travel abroad for abortions or order abortion pills through the mail