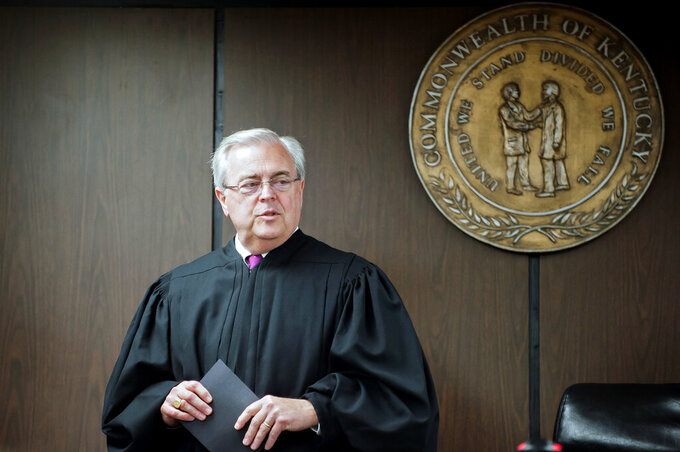 FRANKFORT, Ky. (AP) — Kentucky Chief Justice John D. Minton Jr. announced Wednesday that he will not run for reelection next year, signaling the end of an era on the state's highest court when his current term concludes.

Minton, who joined the Supreme Court in 2006, said he wanted to give potential candidates ample time to decide whether to enter the campaign in his 14-county district south and west of Louisville.

“I felt like I should go ahead and let the people of the 2nd Supreme Court District know of my intentions, so that qualified people who might want to seek this job would do so," Minton said in a phone interview. "I want to give them plenty of time to make those arrangements.”

Minton was appointed to the high court by then-Gov. Ernie Fletcher in the summer of 2006 and he won election to the seat that fall. In 2008, Minton's colleagues first selected him to serve as chief justice and have done so every four years since.

“The traditional thinking is you become a lame duck as soon as you announce that you’re not" seeking reelection, he said Wednesday. "I realize that’s true, but there’s still quite a bit for me to do.”

As chief justice, he will present the judicial branch’s proposed budget to the legislature next year. And for years, Minton has been a leading advocate for redrawing the boundary lines of judicial districts statewide. He signaled Wednesday that he's ready to lead the effort again during the 2022 legislative session.

“I'm the perfect one to be presenting this, because I don't have to worry about the political blowback for heading up the initiative,” he said. “We just need to have the courage to propose significant redistricting. ... And I'm willing to lead that because I think it's important.”

Minton's tenure as a Kentucky judge will reach 30 years in January. He first served as a circuit court judge and then went on the state Court of Appeals before joining the Supreme Court.