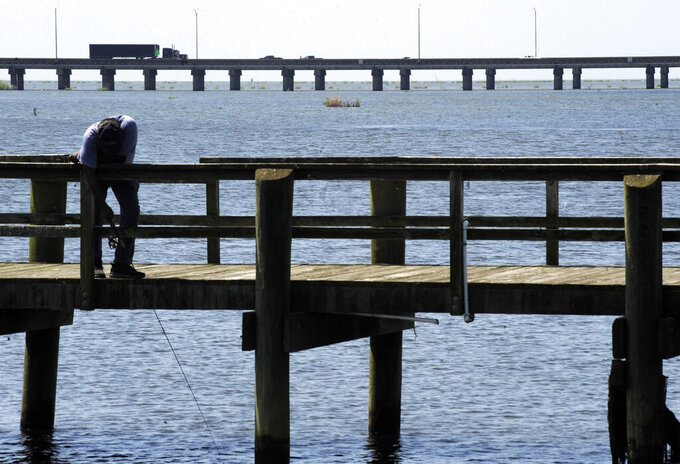 Jay Reeves, ASSOCIATED PRESS
FILE - A man fishes on a pier as traffic on Interstate 10 crosses Mobile Bay at Spanish Fort, Ala., on Wednesday, Aug. 28, 2019. A $2.7 billion plan to ease traffic along the northern Gulf Coast in Alabama with the construction of a new Interstate 10 bridge and highway through Mobile has taken a step forward. (AP Photo/Jay Reeves)

MOBILE, Ala. (AP) — A $2.7 billion plan to ease traffic along the northern Gulf Coast in Alabama with the construction of a new Interstate 10 bridge and highway through Mobile has taken a step forward with approval from two key planning organizations.

Stalled for years in part because of questions over tolls, the project won the endorsement Wednesday of metropolitan planning groups on both sides of Mobile Bay. Construction could begin as early as next year, officials said.

The project, which includes construction of a tall bridge over the Mobile River and a replacement of I-10 over Mobile Bay just east of downtown, could be complete by late 2028 if work begins next year, state transportation officials have said.

The work was estimated to cost $2.1 billion in 2019, but public opposition over plans to charge cars one-way tolls of as much as $6 led to delays. Under the new plans, passenger vehicles would pay a maximum toll of $2.50 and trucks would pay as much as $18, a state report said, but free routes would still be available.

The price of the project — which officials say is needed in part to make hurricane evacuations easier — increased more than 25% as officials tried to work out a way to quiet opposition.

Nearly 100,000 cars and trucks use the current system of tunnels and bridges that cross Mobile Bay and the Mobile River, contributing to snarls on roads that were designed for only 35,000 vehicles a day.

The president of the Eastern Shore Chamber of Commerce, Casey Williams, said the new bridge is essential.

“Business and industry are the heartbeat of our economy and the bridge is critical to moving coastal Alabama forward,” he said in a statement.

A report from Alabama's highway department said work would be funded with $250 million from the state; $625 million in federal grants; $1.2 billion in bonds and $1.1 in federal loans, with toll revenue used to pay the debt.