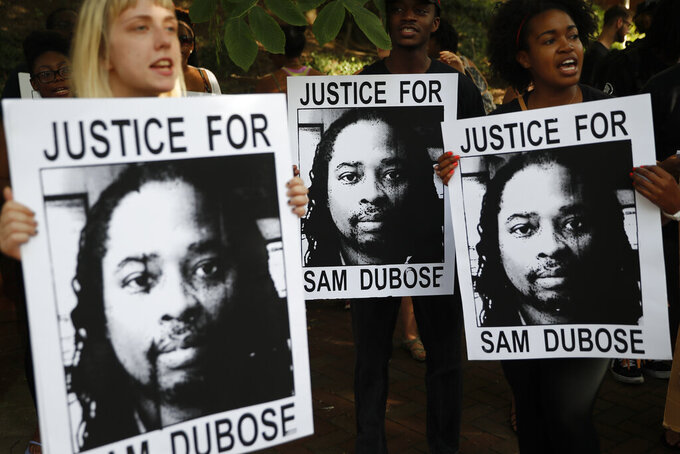 John Minchillo, ASSOCIATED PRESS
FILE - Protestors chant while holding signs depicting the likeness of Sam DuBose during a demonstration on the University of Cincinnati campus calling for second retrial of Ray Tensing, on June 28, 2017, in Cincinnati, in the killing of DuBose during a routine traffic stop on July 19, 2015. A series of shootings by white Ohio police officers of Black adults and children in recent years and subsequent protests have led to calls for changes in policing in the state and new requirements for the use of force. (AP Photo/John Minchillo, File)

COLUMBUS, Ohio (AP) — A series of shootings by white Ohio police officers of Black adults and children in recent years and subsequent racial injustice protests have led to calls for changes in policing in the state, new use of force requirements and implementation of body cameras.

A state police community relations board has created statewide police standards for handling mass protests, use of deadly force, recruiting and retention, and body cameras, among others. Voters in both Columbus, the capital city, and Cleveland, have approved first-ever civilian police review boards.

The shootings leading to such changes include the December 2020 death of Casey Goodson Jr., shot five times in the back by Franklin County Sheriff’s Deputy Jason Meade. Meade, who has since retired, was indicted Thursday on charges of murder and reckless homicide.

A look at several high-profile cases in recent years:

Bryant, 16, who was Black, was shot April 20 by rookie Columbus police officer Nicholas Reardon as she swung a knife at a young woman. Reardon, who is white, had just left his car after arriving at a house where police had been dispatched following a 911 call from someone saying they were being physically threatened.

Reardon has not been charged and the case remains under investigation. The shooting was captured on Reardon's body-worn camera.

A week later, the Columbus mayor and city attorney requested a Justice Department review of the police department because of the killing of Bryant and others, a review the government agreed to in September.

Jackson, 27, was shot and killed April 15 in a hospital emergency room in Westerville by Columbus police and Mount Carmel St. Ann's Hospital security after officers conducting a routine pat-down of Jackson, who was Black, found a gun in his waistband, spurring a struggle over the weapon and a standoff that ended when officers shot him. The shooting was partially captured on the officers' body-worn cameras.

Minutes earlier, a Westerville officer had missed the gun during a pat-down as paramedics were preparing to transport Jackson to the hospital, as seen on the officer's body-worn camera.

No officers have been criminally charged. The Attorney General's Office, which investigated, has sent the results of its findings to the Franklin County Prosecutor's Office.

The 47-year-old Hill, who was Black, was shot and killed by white Columbus officer Adam Coy on Dec. 22, 2020, as Hill emerged from a garage holding a cell phone. The shooting was captured by Coy's body-worn camera but without audio.

Coy was fired and has pleaded not guilty to a murder charge. He's scheduled for trial next year.

Fallout from the shooting included the Columbus mayor forcing out the interim police chief and requiring expanded use of body-worn cameras to ensure audio is activated during encounters. The city also agreed to a $10 million settlement with Hill's family.

Goodson, 23, who was Black, was shot Dec. 4, 2020, in an encounter with Jason Meade, a white Franklin County Sheriff's deputy who had just finished an unsuccessful search for a fugitive as part of his work for a U.S. Marshals Service task force.

Goodson was not the subject of the search and the Marshals Service has said Meade wasn’t performing a mission for them at the time of the shooting. Meade has said through an attorney that he followed Goodson while driving after Goodson pointed a gun at Meade and another driver. After following Goodson to a house on foot, Meade said he fired when Goodson pointed a gun at him.

Meade was charged Thursday with murder and reckless homicide. His attorney said Meade will plead not guilty at a hearing Friday and that his client shot at Goodson in fear for his life.

Goodson's family said he was holding a sandwich, not a gun.

Crawford, 22, who was Black, was shot by an officer on Aug. 5, 2014, after police responded to an emergency call about someone waving a rifle in a store in Beavercreek, a Dayton suburb. Police said Crawford didn’t obey commands to drop what they learned later was an air rifle he was carrying from a store shelf.

No officers were charged, with federal authorities announcing in 2017 they ended their investigation, concluding there wasn’t enough evidence to charge the white officer who killed Crawford.

Crawford's family reached a $1.7 million settlement with Beavercreek in 2020.

Tyre, 13, was fatally shot by Columbus officer Bryan Mason on Sept. 16 2016, while Mason was responding to a reported armed robbery.

Tyre was shot after he ran from Mason and pulled a BB gun that looked like a real firearm, police have said. Mason has said he feared a “gun fight” and argued he acted reasonably to protect himself.

The family has sued Mason and the police department in federal court, arguing Tyre's death was the result of excessive force, racial discrimination and alleged failure by the police department to properly investigate and discipline officers for racially motivated or unconstitutional behavior.

The 43-year-old DuBose, who was Black, was shot in the head on July 19, 2015, by University of Cincinnati officer Ray Tensing after the officer pulled DuBose over for a missing front license plate. Tensing testified he believed his life was in in danger when DuBose tried to drive away during the stop.

An expert hired by prosecutors said his frame-by-frame analysis of Tensing’s body camera video showed Tensing wasn’t being dragged by the car. But mistrials were declared twice when juries deadlocked over charges.

Tamir, 12, was playing with a pellet gun outside a recreation center in Cleveland on Nov. 22, 2014, when he was shot and killed by Officer Timothy Loehmann seconds after Loehmann and his partner, Officer Frank Garmback, arrived. Tamir was Black and the officers were white.