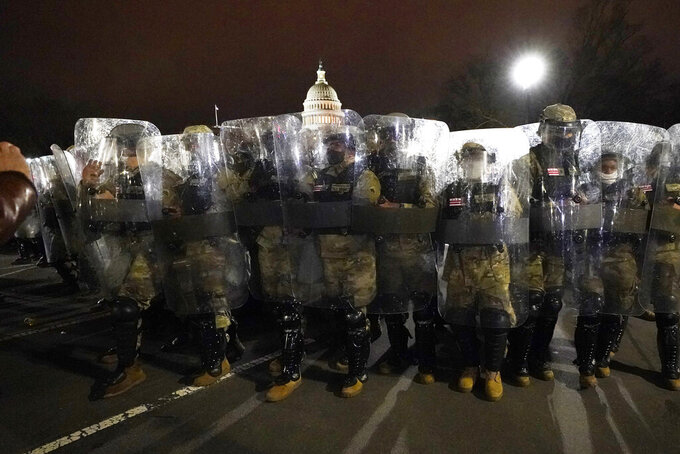 Julio Cortez, ASSOCIATED PRESS
FILE - Members of the DC National Guard stand outside the U.S. Capitol, on Jan. 6, 2021, after a day of rioting protesters. An independent review has concluded that the Defense Department and its top leaders acted appropriately before and during the Jan. 6 insurrection at the U.S. Capitol. (AP Photo/Julio Cortez, File)

WASHINGTON (AP) — An independent review has concluded that the Defense Department and its top leaders acted appropriately before and during the Jan. 6 insurrection at the U.S. Capitol, despite sharp criticism from some local and congressional leaders that the military did not respond quick enough as protesters breached the building.

The Defense Department's Office of Inspector General, in a report released Wednesday, said military and defense leaders “did not delay or obstruct” the department's response. It said decisions made by two officials at the time, acting Defense Secretary Chris Miller and Army Secretary Ryan McCarthy, “were reasonable in light of the circumstances that existed on that day and requests from D.C. officials” and the Capitol Police.

Criticism has centered on the fact that it took about three hours for members of the District of Columbia National Guard to respond to the Capitol — a timeline the Pentagon has defended as appropriate and necessary to determine the mission, equipment and riot preparedness of the citizen-soldiers and get new orders approved and delivered to commanders.

The IG report is one of a number of investigations and reviews of that tumultuous day, which saw a violent mob overrun police barricades, break into the Capitol and hunt for lawmakers, including then-Vice President Mike Pence, who had to be swiftly escorted out of harm's way.

The Pentagon inspector general, by law, is an independent authority that conducts audits, evaluations, and investigations of Pentagon activities.

The inspector general focused narrowly on the military response to the Jan. 6 riot, while other probes are looking more closely at the roles of then-President Donald Trump and his supporters, including whether they fueled the assault or planned it. Many gathered at a rally before the riot and then marched up to Capitol Hill.

More than 600 individuals have been arrested and charged in connection with the insurrection, Seven people died during or after the rioting, including Trump supporter Ashli Babbit, who was shot and killed while breaking into the House chamber.

Jacob Chansley, the spear-carrying rioter whose horned fur hat, bare chest and face paint made him one of the more recognizable figures in the assault on the Capitol, was sentenced Wednesday to 41 months in prison. Chansley, who pleaded guilty to a felony charge of obstructing an official proceeding, was among the first rioters to enter the building.

The Pentagon inspector general found that the process followed by the military was appropriate, and noted that many of the Guard were not trained in law enforcement. It described a “chaotic and confusing situation” and said initial reports to the Defense Department were contradictory.

The report also said that McCarthy, the Army secretary at the time, was within his authority to require the D.C. Guard to lay out a mission plan before he would authorize their deployment. Others had questioned that decision, saying it delayed the troops' response.

Maj. Gen. William Walker, commanding general of the D.C. Guard, told senators in March that the chief of the Capitol Police at that time requested military support in a “voice cracking with emotion” in a 1:49 p.m. call as rioters began pushing toward the Capitol. Walker said he immediately relayed the request to the Army but did not learn until after 5 p.m. that the Defense Department had approved it.

The IG report found that defense officials correctly went through the approval process.

“Military personnel are trained to respond to civilian emergency events, not by sending individuals into an uncertain situation as they become available, but by assembling and deploying a force capable of decisive operations,” the report concluded. “Military doctrine requires that commanders first determine essential details, conduct a mission analysis, and then develop a thorough” plan.

The IG made several recommendations. It said the department should develop specific plans for a military response to a civil disturbance within the National Capital Region, including how federal agencies must request support. And it recommended the military train with federal and local agencies on how to better coordinate when large-scale events are planned.

It also recommended that Guard personnel should be given reliable radio and communications equipment.

The report dismissed suggestions that concerns about the optics of sending Guard forces to the Capitol while Congress was in session fueled any delay, saying that McCarthy asked Miller to approve sending troops “within minutes” after his call with Capitol officials. It said such concerns “did not impact” the Pentagon response.