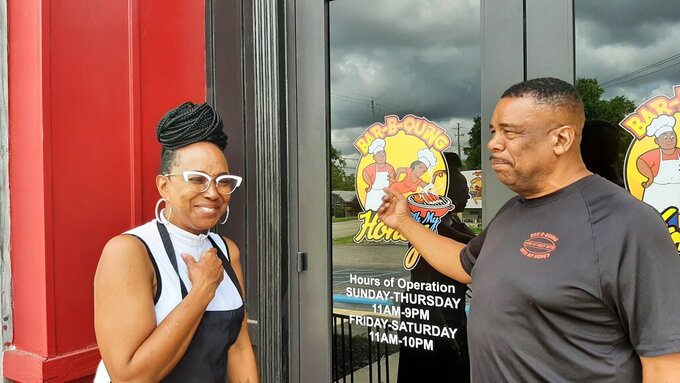 Lawrence Specker, ASSOCIATED PRESS
Timothy Witherspoon teases his wife, Glenda Marks Witherspoon, about the logo for Bar B Quing With My Honey on May 3, 2022 in Mobile, Ala. The restaurant is a big place with a big menu: Barbecue, burgers, loaded fries, fish, shrimp and grits. (Lawrence Specker/Press-Register via AP)

MOBILE, Ala. (AP) — There’s a love story in the name of this restaurant, Bar B Quing With My Honey, and meeting the owners puts you right in the middle of it.

The latest chapter is being written in midtown Mobile, where Glenda Marks Witherspoon and her husband, Timothy Witherspoon, have been operating their newest restaurant for a few months. It’s a big place with a big menu: Barbecue, burgers, loaded fries, fish, shrimp and grits. There’s a Sunday brunch, and they’re adding a hot bar for the lunch crowd. If you can talk yourself out of going straight for the barbecue, you need to try the fish tacos.

But the story starts long before this location or this menu, and as they tell it, Glenda and her honey sound like a couple of characters who should be at the heart of some entrepreneurial reality show. They finish each other’s sentences. They tell stories on each other.

Her mom ran Mount Vernon restaurant for decades. Jackie’s Kitchen. “I grew up in the business,” said Glenda Marks Witherspoon. “Watching my mom, helping my mom. I didn’t have a choice. We started going up there with her, me and my sister, I was 12, she was 13. That’s where it all started.”

She grew up, moved away, lived in other parts of the country, came back to Mobile. She and Witherspoon, a landscaper, had been together for a few years when and got the notion to start a barbecue restaurant in Mount Vernon.

Her: “I saw a little building in Mount Vernon, it used to be an old dentist’s office …”

Him: “Let me tell this story.”

Her: “We went in there and refurbished that …”

Her: “I was telling him how we got the dentist’s office. A guy had a sign on it …”

Him: “That’s not the way it happened. Let’s tell the truth about this. She came home one day. I’m a landscaper, been a professional landscaper all my life. That’s where I was making my living … After me and her had been together for a while, she was still working for her mama, she came home one day and showed me this sign. I said, ‘Where are you going with this sign, this is a for-rent sign. Why’d you bring this home?’ She said, ‘I want to open up a barbecue business.’”

Her: “Well, I had actually stopped and took it off the building, so nobody else would see it.”

Her dad, a brickmason, helped design and build the pit. “My mom had the barbecue. What she did for me was a big thing. I have to always say that,” said Marks Witherspoon. “I told her that I wanted to sell barbecue, and she let me sell her barbecue, her sauce. What she did, she took it completely off her menu. That’s very important to me because that’s a big deal. My mom made good money off her barbecue.”

That was in 2002. When they closed the restaurant years later, the notion was that she was going to spend a year or so taking it easy. His company did jobs in other states, and she was going along. Unlike the restaurant business, there was free time. “We were going fishing,” she said. “I was like, is life really like this?”

It didn’t stick. In 2019 she couldn’t resist the itch to get back in the game.

Him: “Like a fool, I did it again. For the second time. I didn’t know there was going to be a third time.”

This was a small strip-mall store in the Loop area. The idea was for it to be a takeout spot, and that turned out to be a good call about six months later when the pandemic hit. After a few weeks shut down, they settled on a minimal-contact business model: Customers would order in advance, and they’d walk orders out for curbside pickup. “It worked better than I thought it would,” said Marks Witherspoon. “It kept things moving.”

Even so, times were tough. For one thing, prices shot up on ribs and wings. For another, the fact that the business had been open for less than a year made it much harder to tap on to the various COVID-19 relief programs that were offered to businesses.

“We were living from day to day,” said Witherspoon. “Other folks who weren’t doing the right thing were getting money left and right.”

Still, it was a time of opportunity.

“You know what it did, in my eyes?” said Marks Witherspoon. “It made something out of the little man. It made the little man, or the little company, become a big company or a midsized company. … It did so much for online.”

In 2021, as the pandemic slowly eased, she moved in on another one of her dreams: Opening a boutique. Honey Chile Custom Jewelry is primarily an online effort, with information at www.honeychilejewelry.com.

Her: “But that wasn’t his choice, to say no about the boutique. I wanted a boutique. He helps me with everything I do and I like that about him. He doesn’t discourage me. Sometime I wish he would, but he doesn’t. That’s a good thing. We’re really, really good partners.”

Him: “She supports me in everything I do.” He’s mostly retired from landscaping work but promotes concerts through his Riverside Productions venture. (Coming up: A Father’s Day weekend blues show June 18 at Cooper Riverside Park in downtown Mobile.)

By late 2021 she’d also set her sights on another new venture. “I wanted another sit-in business,” she said.

Her: “I don’t really know what we was thinking on this one, though, really.”

Her: “He’s telling the truth”

Him: “I wasn’t thinking about opening up another location, ’cause I was trying to get this spot under control. … I didn’t know anything about her shopping for a location.”

Her: “He did. He said ‘I’m not fooling with that.’ ‘You’re on your own,’ he told me. I said, “But you’ve got to come because the owner wants us to have this building.”

Him: “It took me some time to digest it, really. I stayed here all day all night trying to figure out what to do, what I’m going to have to have.” He sat there into the evening, listening to the radio, sipping a drink, thinking about the work ahead. He’d already gone from “no” to “how.” Soon the work began at the spot, west of Florida Street and well east of the fast-food corridor near the interstate.

Him: “We got it open. Now we got to do what it takes to keep it open.”

Both say their priorities for Bar B Quing With My Honey are to offer good customer service in a clean, family-friendly environment. Like seemingly everyone else in the restaurant business these days, they’ve found that hiring and keeping dependable employees is a challenge. Marks Witherspoon said she’s pleased with the core group she’s assembled but is looking for more.

Meanwhile, patrons have been working their way through the menu, finding some favorites. And it turns out that the excellent pulled pork isn’t the only thing high on the list.

Supply-chain problems continue to be a gremlin.

They’ll get through it.

Him: “I love my wife and I try to give her what she wants.”

Her: “We bump heads a lot. But we work together.”

For more information on Bar B Quing With My Honey, including menu and prices, visit https://www.facebook.com/bbqwmyhoney.