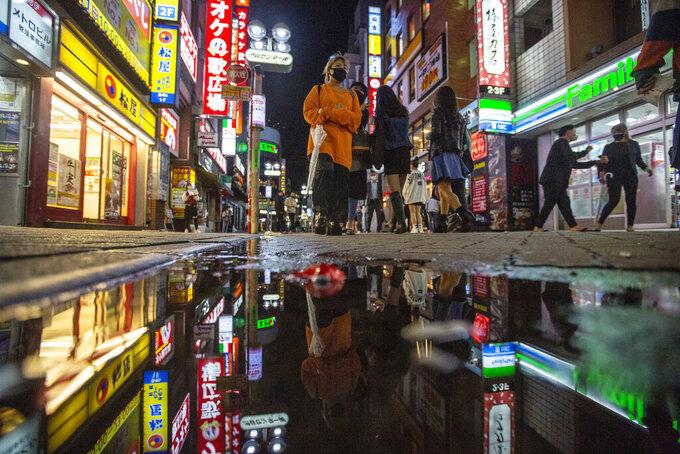 Kiichiro Sato, ASSOCIATED PRESS
People walk along the streets full of shops, bars and restaurants Friday night, Oct. 1, 2021, in Shibuya, an entertainment district of Tokyo, as Japan fully came out of a coronavirus state of emergency for the first time in more than six months. Japan is poised to approve a record 56 trillion yen, or $490 billion stimulus package, including cash handouts and aid to ailing businesses, to help the economy out of the doldrums worsened by the coronavirus pandemic.(AP Photo/Kiichiro Sato)

TOKYO (AP) — Japan's Cabinet approved on Friday a record 56 trillion yen ($490 billion) stimulus package, including cash handouts and aid to ailing businesses, to help the economy out of the doldrums worsened by the coronavirus pandemic.

“The package has more than enough content and scale to deliver a sense of security and hope to the people,” Prime Minister Fumio Kishida told reporters in announcing the plan earlier in the day.

The proposal won Cabinet approval in the evening, according to the prime minister's office. It still needs parliamentary approval. Kishida has promised speedy action, and parliament will convene next month, he said.

The plan includes doling out 100,000 yen ($880) each in monetary assistance to those 18 years or younger, and aid for businesses whose sales plummeted because of coronavirus measures.

Japan has never had a full lockdown during the pandemic and infections remained relatively low, with deaths related to COVID-19 at about 18,000 people.

Under the government’s “state of emergency,” some restaurants closed or limited their hours, and events and theaters restricted crowd sizes for social distancing. Apart from that, shortage of computer chips and other auto parts produced in other Asian nations that had severe outbreaks and strict lockdowns has hurt production at Japan’s automakers, including Toyota Motor Corp., an economic mainstay.

The world’s third largest economy was already stagnating before the pandemic hit. So while the U.S. and many other countries are looking for ways to cut back on emergency support for their economies and tamp down inflation, Japan is looking for ways to rev its idling engines.

The government has been studying restarting its “GoTo Travel” campaign of discounts at restaurants and stores, which is designed to encourage domestic travel. The campaign, which began last year, was discontinued when COVID cases started to surge.

Some critics have said the government approach amounts to “baramaki,” or “spreading out handouts,” and will prove ineffective in generating growth in the long run. Others say the proposed cash aid leaves out families without children and other poor.

The scale of the latest package also will push Japan's debt higher since it will be financed by issuing bonds.

Japan’s economy contracted at an annual rate of 3% in the July-September period, largely because of weak consumer spending. Analysts say the economy is unlikely to rebound until next year.

Japan has also promised to earmark spending for vaccine research after facing criticism over being dependent on imports for coronavirus vaccines. It has so far approved vaccines from Pfizer, Moderna and AstraZeneca.

Kishida, who has promised “a new capitalism” for Japan, took office in October. In September, he became the head of the ruling party, replacing his predecessor Yoshihide Suga, who stepped down after just a year in office, largely because of widespread public discontent about his inept response to the pandemic.

“We want to support those people who are suffering because of the coronavirus, while steering our nation's sorely damaged economy back to health,” Kishida said.