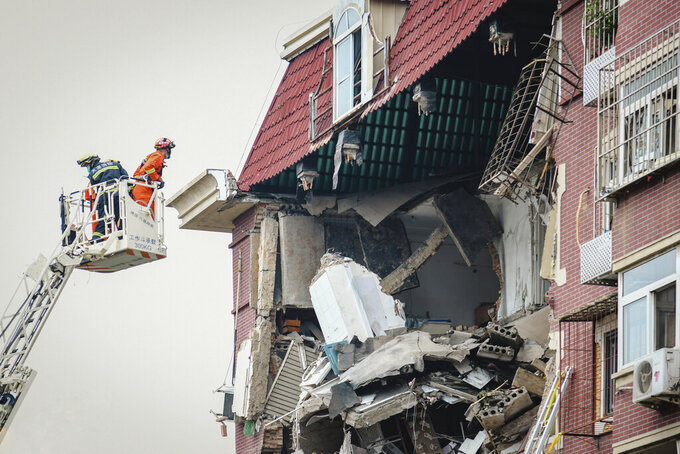 Uncredited, ASSOCIATED PRESS
A fireman looks into the partially collapsed section of a building in China's Tianjin Municipality Tuesday, July 19, 2022. A gas explosion left some missing and others injured. (Chinatopix Via AP) CHINA OUT

BEIJING (AP) — Four people have died in a gas explosion that injured 13 others at a six-story residential building in the Chinese port city of Tianjin, state media said Wednesday.

A trapped person who had been pulled out on Tuesday at 5:40 p.m., more than 10 hours after the morning blast, had weak vital signs and died after being taken to a hospital, according to a Tianjin Daily report posted by the Tianjin government on social media.

State broadcaster CCTV later said the rescue work had been completed. It didn't provide any details on the four deaths. The injuries to the other 13 are not life-threatening, CCTV said in an online article.

The explosion occurred around 7:15 a.m. in the city's Beichen District. Photos of the scene showed upper stories of the building caved in with the roof still intact, but no obvious damage to neighboring units.

Tianjin, a major port and manufacturing hub, is less than an hour by high-speed train from Beijing and has long been one of China’s most developed and international cities.

The cause of the explosion remains under investigation, but it appears to point to the deterioration of infrastructure following more than three decades of breakneck economic growth. The building was constructed in the 1980s, the Tianjin Daily reported.

China’s Ministry of Emergency Management called for determining the cause as quickly as possible and a comprehensive screening to identify gas leak risks and prevent such accidents in the future, the official Xinhua News Agency said.