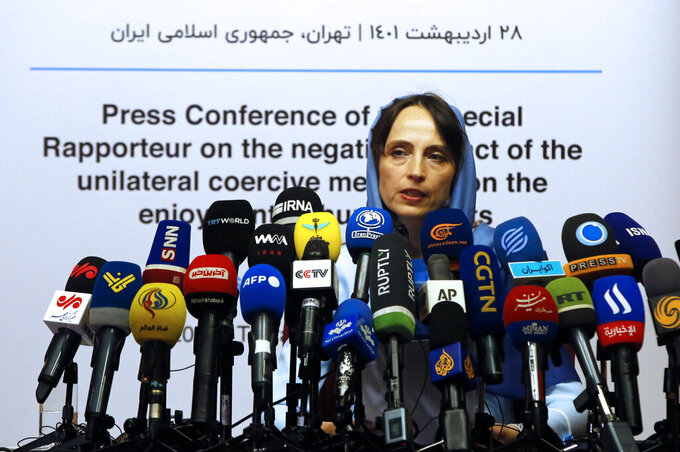 According to Alena Douhan, the U.N. special rapporteur on unilateral coercive measures, the sanctions have affected Iran’s main export groups, banks and also several companies and nationals, including some pharmaceuticals and food production.

This has led to inflation and growing poverty, and depleted state resources for dealing with the basic needs of people with low income and other vulnerable groups, Douhan told reporters during a press conference in Tehran. She singled out those suffering from “severe diseases, disabled people, Afghan refugees, women-led households and children” as being badly affected by the measures.

Douhan, a Belarusian who was appointed in 2020 and reports to the U.N. Human Rights Council, also said that the “sanctions have been substantially exacerbating the humanitarian situation in Iran.” She urged countries that imposed unilateral sanctions against Iran, especially the United States, to remove them.

The nuclear deal had granted Tehran sanctions relief in exchange for strict curbs on its nuclear program. Talks in Vienna to revive that deal — something hat the Biden administration is trying to do — have stalled over an Iranian demand that Washington lift a terrorist designation on the country’s paramilitary Revolutionary Guard.

The negotiations nearly reached completion in March before Moscow demanded that its trade with Iran be exempted from Western sanctions over Ukraine, throwing the process into disarray. Negotiators have yet to reconvene in the Austrian capital of Vienna, and it’s unclear exactly what hurdles lie ahead.

Despite the deadlock, officials say the urgency to close the deal has grown as Iran’s nuclear program has rapidly advanced.

However, over the past weeks, anger over Iran’s worsening economic conditions has mounted amid price hikes of dinner table staples as a result of a new government policy to amend the food subsidy system. Scattered protests have erupted over the price changes in several provinces, with Iranian state-run media acknowledging nearly two dozen arrests.

Bus drivers in Tehran seeking a 10% wage increase walked off the job on Monday, paralyzing parts of the city, and teachers have also gone on strike over the past months in cities and towns across Iran. They have walked out of their classes to press for better pay and working conditions.