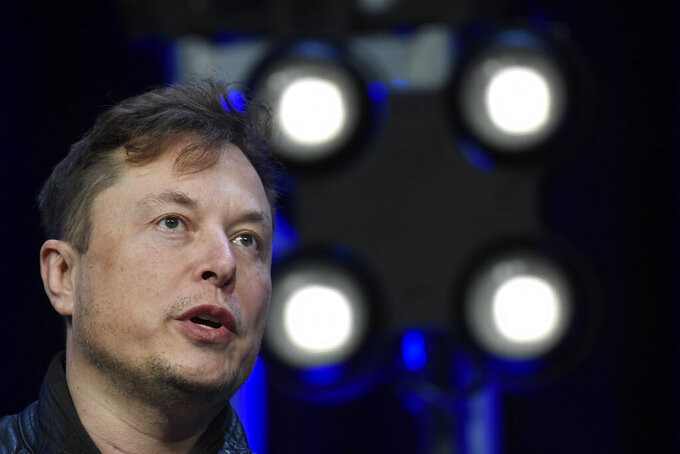 Susan Walsh, ASSOCIATED PRESS
FILE - Tesla and SpaceX Chief Executive Officer Elon Musk speaks at the SATELLITE Conference and Exhibition in Washington on March 9, 2020. Musk will spend Monday, Sept. 26, 2022 and Tuesday, Sept. 27 with lawyers for Twitter, answering questions ahead of an October trial that will determine whether he must fork over the $44 billion he agreed to pay for the social platform before attempting to back out of the deal. (AP Photo/Susan Walsh, File)

WILMINGTON, Del. (AP) — Tesla CEO Elon Musk won a reprieve from questioning by Twitter lawyers Monday, according to several press reports. The billionaire had been scheduled to give a deposition in his high-stakes court fight with Twitter over whether he has to follow through with his agreement to buy the social platform for $44 billion.

Instead, Musk's questioning was postponed to a future date. Twitter CEO Parag Agrawal, who was also scheduled to face Musk lawyers on Monday, likewise postponed his deposition, according to a person who was briefed on the matter.

The Musk postponement was reported by Bloomberg, Reuters and the Wall Street Journal, all of which attributed the information to anonymous sources.

News of the postponements fueled a brief rally in Twitter shares, which jumped 5.4% to $43.03, apparently on hopes of a settlement in the case. That enthusiasm waned later in the day. Twitter shares closed Monday at $41.58, eight cents higher than they opened.

Court watchers said that such postponements are not unusual ahead of major pretrial hearings. A hearing on several significant pretrial motions is scheduled for Tuesday.

Both men were expected to answer questions posed by opposing lawyers ahead of an October trial that will determine who is at fault for the seeming collapse of Musk's Twitter bid, not to mention who owes whom large sums of money as a result. The trial is set to begin October 17 in Delaware Chancery Court, where it's scheduled to last just five days.

Musk, the world’s richest man, agreed in April to buy Twitter and take it private, offering $54.20 a share and vowing to loosen the company’s policing of content and to root out fake accounts. In July, he attempted to back out of the deal, leveling a number of charges at Twitter as justification for his action.

Twitter subsequently sued Musk to force him to complete the acquisition.