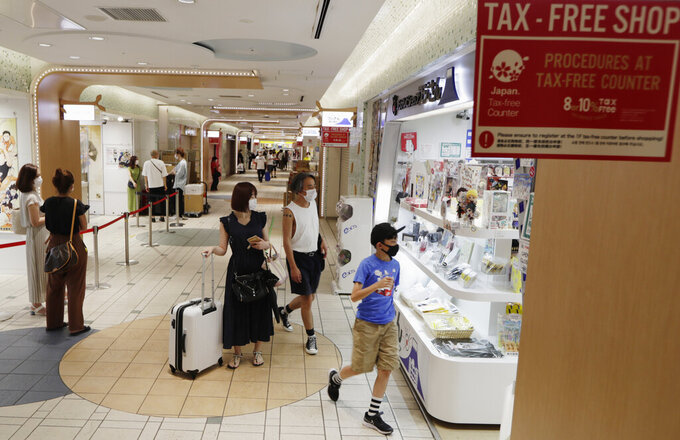 Hiro Komae, ASSOCIATED PRESS
FILE - Shoppers walk into a store at a shopping center in Tokyo on Aug. 17, 2020. The Japanese economy has contracted at an annual rate of 1.2% in the July-September quarter, as consumption declined amid rising prices. (AP Photo/Hiro Komae, File)

TOKYO (AP) — The Japanese economy contracted at an annual rate of 1.2% in the July-September quarter, as consumption declined amid rising prices.

Seasonally adjusted real gross domestic product for the world’s third-largest economy shrank 0.3% on-quarter, according to government Cabinet Office data released Tuesday. The annual rate shows how the economy would have grown if the quarterly rate were to continue for a year.

Japan’s GDP, or the sum of the value of a nation’s products and services, was weaker than analysts had expected, coming after three quarters of moderate growth. Like many nations, Japan has suffered as the coronavirus pandemic slammed industrial production and tourism.

Another factor is the Japanese yen’s fall against other currencies, especially the U.S. dollar. The Federal Reserve has been tightening the key interest rate, but the Bank of Japan has not.

A weak yen is devastating for imports, especially for Japan, imports almost all its oil, as well as much of its food. The war in Ukraine has also sent such prices higher.

Inflation in Japan at about 3% is moderate compared to the U.S. and some other nations. But it’s still noticeable, with everything from cab fares to packaged snacks going up in prices.

In recent decades, Japan has suffered what’s known as deflation, or a continuing downward spiraling of prices. And so widespread price hikes come as a bit of a shock to consumers when wage growth has been relatively slow.

China’s COVID-19 restrictions are also being closely watched because of their great impact on Japan and the Asian region. Although there have been some easing of restrictions, fears are growing about a next wave of infections bringing back lockdowns and other restrictions.

Japanese production was sorely hit by the restrictions, seen in the shortage of supplies in computer chips and other parts.

Some analysts say the Japanese economy will likely gradually recover, although still at risk from what China's pandemic measures, as well as larger geopolitical tensions like U.S.-China relations.

But there were also signs of hope. Tourists from abroad have returned, starting from last month after more than two years of tight border limits.