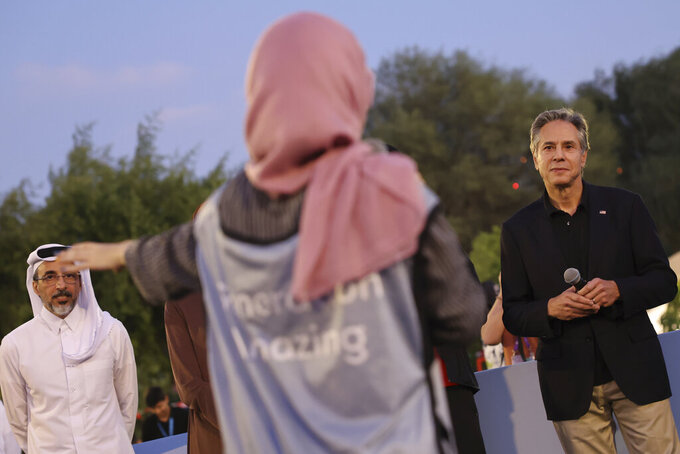 Blinken will also hold crucial diplomatic talks with authorities in Qatar, one of the United States' trusted interlocutors with Iran. Doha shares a massive offshore natural gas field with Tehran.

Blinken's visit comes as part of a strategic dialogue with Qatar, which also hosts some 8,000 American troops at its massive Al-Udeid Air Base that's serves as the forward headquarters of the U.S. military's Central Command. The base was a key node in America's chaotic 2021 withdrawal from Afghanistan and evacuation of Afghan civilians.

“Qatar is a steadfast and important partner to the United States, and U.S.-Qatar ties continue to grow,” said Daniel Benaim, a deputy assistant secretary for the Arabian Peninsula Affairs at the State Department, ahead of Blinken's trip.

“Together, we’ve made important progress on a range of issues, including facilitating the travel of at-risk Afghans to the United States for new beginnings, strengthening regional security, and expanding commercial investment ties between our countries,” he said.

One major issue to discuss is Iran. Nonproliferation experts say Iran now has enough uranium enriched up to 60% — a short step from weapons-grade levels — to reprocess into fuel for a nuclear weapon if it chooses to do so.

Tehran insists its program is peaceful, though it has drastically expanded it since the collapse of its 2015 nuclear deal with world powers.

Meanwhile, Iran is being rocked by monthslong protests following the Sept. 16 death of a 22-year-old woman who had been earlier arrested by the country's morality police.

A crackdown by authorities and violence surrounding the demonstrations have killed at least 419 people, according to Human Rights Activists in Iran, a group that's been monitoring the protests. Iran is playing at the World Cup as well, and will face the U.S. on Nov. 29.

“The thing that’s so powerful about it is everywhere that I go in the world, I find other people who love the game and they love to play it," Blinken told the gathered students. "They love to watch it enough to argue about it. They love to support a team with all of the joy and heartbreak that that brings.”

“It’s an incredibly powerful way of bringing people together,” he added. “It’s just a powerful reminder of what sport brings us together across geography, across backgrounds and across groups of one kind or another.”

But several students displayed the Palestinian flag as a way to remind Blinken about Israel's occupation of territory that Palestinians seek for an independent state of their own.

Palestinian flags have been seen flying and around fans' shoulders, partially due to Qatar's support of Palestinians. Doha opened travel for Israelis to the tournament despite not formally recognizing the country.

“The Palestinian identity itself is an act of resistance because there are people who wish to deny our history and to belittle our suffering," said 17-year-old Palestinian-American student Hasan Zubaidi as he stood next to one Palestinian flag.