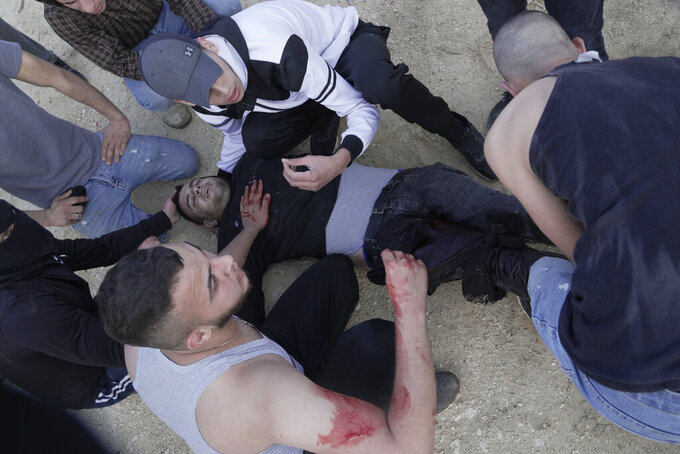 Majdi Mohammed, ASSOCIATED PRESS
Palestinians help a wounded man during clashes with Israeli soldiers in the West Bank village of Silat al-Harithiya, near Jenin, Saturday, May 7, 2022, as Israeli forces demolished the home of Omar Jaradat was part of a group who shot and killed yeshiva student Yehuda Dimentman in the West Bank in Decemer 2021. (AP Photo/Majdi Mohammed)

JERUSALEM (AP) — Israeli troops on Saturday demolished the home of a Palestinian man who killed a Jewish seminary student in a shooting ambush in the occupied West Bank five months ago, the military said.

The demolition took place around dawn in the village of Silat al-Khartiyeh, with troops swinging sledgehammers to break walls and setting off explosives. Residents threw stones and firebombs at soldiers who fired live rounds, the army said. Palestinian medics said three Palestinians were injured by live fire and others by tear gas inhalation.

Such demolitions have been denounced by rights groups as collective punishment, and the military suspended the practice for several years, starting in 2005, after concluding it did not serve as an effective deterrent. The army resumed demolitions several years ago and now carries them out routinely in response to attacks in which Palestinians kill Israelis.

In the most recent attack, two Palestinians from the West Bank killed three Israelis and wounded four in a mass stabbing in the ultra-Orthodox Jewish town of Elad in central Israel on Thursday. As of Saturday, the suspected assailants, two young men from the town of Jenin, remained at large.

Officials familiar with the investigation said the attackers arrived in Elad in a vehicle driven by one of the victims and then killed him. At least one attacker also used an axe, according to officials who spoke on condition of anonymity because they were not authorized to discuss details with the media. A gag order has been placed on much of the investigation.

At least 18 Israelis have been killed in five attacks since March, including another stabbing rampage in southern Israel, two shootings in the Tel Aviv area, and a shooting last weekend in a West Bank settlement.

Nearly 30 Palestinians have died in violence — most of whom had carried out attacks or were involved in confrontations with Israeli forces in the West Bank. But an unarmed woman and two apparent bystanders were also among those killed, and rights groups say Israel often uses excessive force.

Hamas, the Islamic militant group ruling the Gaza Strip, claimed responsibility for one of the attacks in which two assailants killed a security guard at the entrance of a West Bank settlement last week.

Some Israeli media personalities suggested that Israel respond by targeting Yehiyeh Sinwar, Hamas top leader in Gaza. On Saturday, the group's armed wing warned Israel of “unprecedented response” if Sinwar was hurt. Hamas and Israel have fought four wars and dozens of shorter rounds of cross-border skirmishes since 2008.

The ongoing conflict plays out against the backdrop of Israel's occupation, now in its 55th year, of the West Bank and other lands Palestinians seek for a state. Serious peace talks collapsed more than a decade ago, while Israel's settlement expansion on occupied lands has continued unabated.

On Friday, Israel said it is set to advance plans for the construction of 4,000 settler homes in the West Bank. If approved, it would be the biggest advancement of settlement plans since the Biden administration took office. The White House is opposed to settlement growth because it further erodes the possibility of an eventual two-state solution to the Israeli-Palestinian conflict.

Earlier this week, Israel’s Supreme Court upheld an expulsion order that would force at least 1,000 Palestinians out of an arid region in the southern West Bank where they say they have been living for decades. The military declared the area a firing zone in the early 1980s.