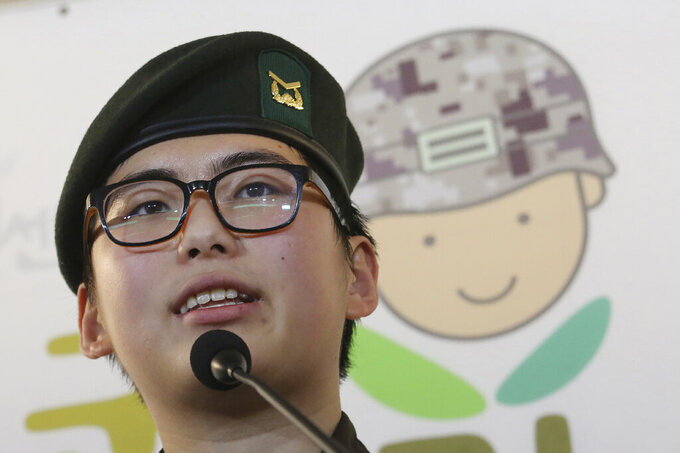 SEOUL, South Korea (AP) — South Korea’s military said Thursday it will appeal a landmark court ruling that struck down its decision to discharge the country’s first known transgender soldier before she was found dead earlier this year.

A district court ruled this month that the military unlawfully discriminated against the soldier by forcing her out last year for undergoing gender reassignment surgery.

The Defense Ministry said it respects the verdict but has decided to let the army appeal. Ministry officials said they asked the Justice Ministry to approve the filing, a process required by law.

In response to questions by The Associated Press, the Justice Ministry said it’ll make a decision on the appeal request soon after reviewing major legal issues and other aspects of the case.

An appeal could draw strong protests from human rights groups, which have been urging the military to accept the verdict and work out measures to guarantee service for sexual minorities.

“The government may appeal, but our position is that they must not do so because that’s the attitude the government must have in the democratic society,” said activist Cho Kyu-suk with the Center for Military Human Rights Korea.

Cho called the appeal a delaying tactic because the military worries about a possible backlash from conservatives while having no policy on transgender soldiers.

South Korea prohibits transgender people from joining the military but has no specific laws on what to do with those who have sex change operations during their time in service. When the army discharged Byun Hui-su in January last year, it cited a law provision allowing it to dismiss personnel with physical or mental disabilities if those weren’t a result of combat or suffered in the line of duty.

In its Oct. 7 ruling, the Daejeon District Court ruled against the discharge, saying that Byun had already informed the army that she had registered her request to change her legal status as a woman with another local court. Her request for a legal gender change was approved less than a month after her discharge.

Defense Minister Suh Wook told lawmakers Thursday that a decision on allowing transgender people in the military must come after reviewing whether there's a public consensus and how it would affect military morale. He earlier said the army considered Byun as a male soldier when it discharged her.

Byun was found dead at her home in March at age 23. Before her discharge, Byun, a staff sergeant, told reporters that she wanted to serve as a female soldier near the tense border with North Korea.

Under conscription aimed at deterring aggression from North Korea, all able-bodied men in South Korea must serve 18-21 months in the military. Byun voluntarily joined as a non-commissioned officer to become a professional soldier.