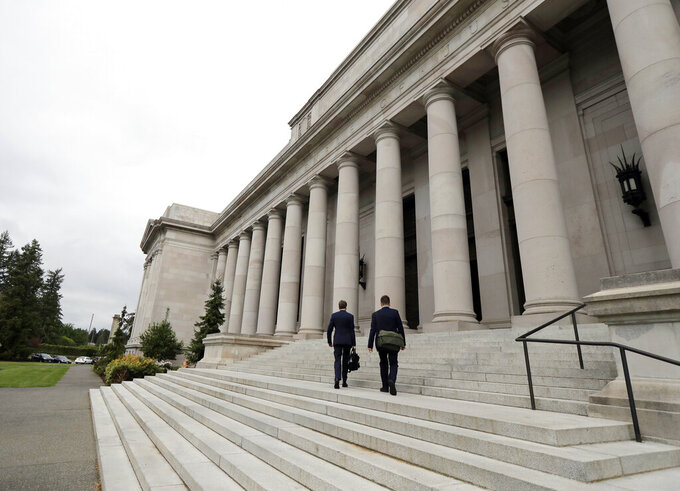 Ted S. Warren, ASSOCIATED PRESS
FILE - In this May 17, 2018, file photo attorneys walk up the steps of the Washington Supreme Court building, the Temple of Justice, in Olympia, Wash. The court on Thursday, Sept. 30, 2021, unanimously upheld the Washington's tax on big banks aimed at providing essential services and improving the state's regressive tax system. The 1.2% business and occupation surtax, a tax added on top of other taxes — was passed by the Legislature in 2019. (AP Photo/Ted S. Warren, File)

The 1.2% business and occupation surtax — a tax added on top of other taxes — was passed by the Legislature in 2019. It applies to banks that make more than $1 billion in annual profits, but it is assessed only on their economic activity in Washington.

The banking industry sued, saying the tax discriminated against banks engaged in interstate commerce, in violation of the U.S. Constitution, which gives Congress the right to regulate trade among the states.

The justices ruled that the tax does not discriminate against out-of-state banks.

“It applies equally to all financial institutions meeting the $1 billion income threshold, irrespective of whether they are based inside or outside of Washington,” Justice Barbara Madsen wrote.

The ruling overturned a decision last year by King County Superior Court Judge Marshall Ferguson, who found that the tax did have a discriminatory effect.

In their challenge, the Washington Bankers Association and the American Bankers Association noted that of the 153 financial institutions that had to pay the tax during the first quarter of 2020, 150 were based out of state. Out-of-state entities paid more than 99.7% of the $34 million collected during that period, an attorney for the groups, former Washington Attorney General Rob McKenna, told the justices during arguments in May.

But state Solicitor General Noah Purcell said that argument would lead to absurd results: If Washington couldn't impose taxes that are written neutrally but which wind up affecting more out-of-state businesses than in-state ones, the state wouldn’t be able to tax tobacco.

Lawmakers said they designed the surtax to help make the state's taxation more progressive by targeting businesses best able to pay. Washington’s middle class and poor residents pay two to six times as much of their income in taxes as the wealthy do, lawmakers found.

The Washington Bankers Association said in a statement the industry groups were reviewing their options. Given the potential interstate commerce issue, they could ask the U.S. Supreme Court to review the decision.

“We continue to believe that a tax that is actually only paid by banks based out of state or otherwise heavily engaged in interstate commerce violates the U.S. Constitution,” the statement said.

Further, the statement criticized the Legislature for passing the law in the last few days of the 2019 session, with what it described as limited public input. The first legislative hearing for the measure was on April 26 that year; within two days it had passed both houses and been delivered to the governor.

The case drew a friend-of-the-court brief from labor and community activists, including the Washington Black Lives Matter Alliance, who argued that the tax was a legitimate way for lawmakers to target Washington’s regressive tax system.

“The fact that the Supreme Court came back with a unanimous decision that referenced these issues — the regressive tax structure, the predatory nature of it, the disproportional impact of it and the state's desire to bring equity to it — is a victory across the board,” said Sakara Remmu, lead strategist for the Washington Black Lives Matter Alliance.

Another effort by Democratic lawmakers to have the rich pay more in taxes — a capital gains tax due to take effect in January — is also facing a legal challenge. The measure creates a 7% tax on capital gains from stocks, bonds and other assets above $250,000, with exemptions for retirement accounts, real estate and some other assets. It's expected to raise about $445 million a year for early learning and child care programs.

McKenna is also representing groups challenging that tax, saying it is an income tax barred by the state constitution.