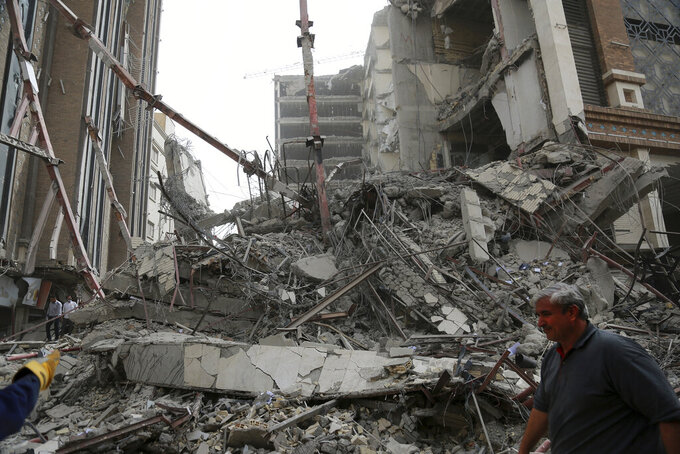 Mohammad Amin Ansari, ASSOCIATED PRESS
In this photo provided by Fars News Agency, rubble remains from a 10-story commercial building under construction that collapsed killing several people in the southwestern city of Abadan, Iran, Monday, May 23, 2022. There are fears the casualty toll could be much higher as more than 80 people were still believed to be trapped under the rubble after the Metropol building toppled, burying shops and even some cars in the surrounding streets, state TV reported. (Mohammad Amin Ansari, Fars News Agency via AP)

There were fears the casualty toll could be much higher as more than 80 people were still believed trapped under the rubble after the Metropol building toppled, burying shops and even some cars in the surrounding streets, the report said.

ٍEhsun Abbaspour, the Abadan regional governor, told state TV that there were 27 injured in the collapse on Amir Kabir Street, some in critical condition.

The report gave no reason for the collapse, which happened during a sandstorm, but the owner of the building as well as the project manager of the construction company that built it have been arrested.

People lined up at the local blood transfusion center to donate blood for the injured.

“I thought it was an earthquake at first,” said Ahmad, a shop owner in the neighborhood who gave only one name because he was not authorized to talk to the media. He said angry residents assaulted the city's mayor, Hossein Hamidpour, when he visited the scene.

Videos on social media showed angry protesters gathering at the site as rescue teams were still working to retrieve casualties and clear the rubble. Rescue workers from neighboring cities rushed to Abadan to help.

No further information was immediately available and authorities said the incident was under investigation.

The collapse reminded many of the 2017 fire and collapse of the iconic Plasco building in the capital of Tehran that claimed dozens of lives.