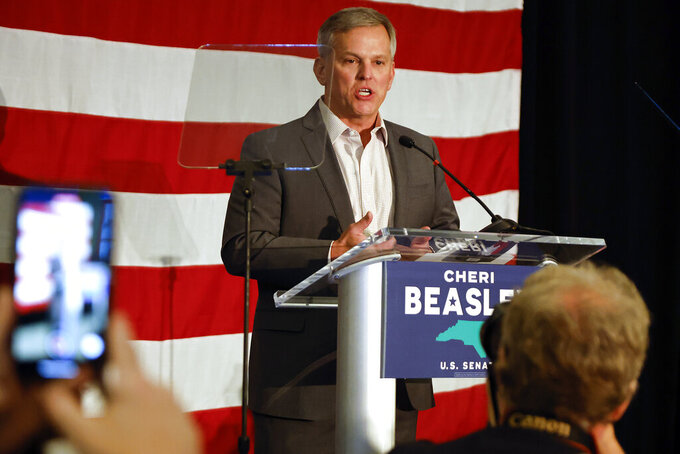 Karl B DeBlaker, ASSOCIATED PRESS
FILE - North Carolina Attorney General Josh Stein speaks at a campaign party hosted by Democratic U.S. Senate candidate Cheri Beasley at a hotel in Raleigh, N.C., on Nov. 8, 2022. Representatives for two elected North Carolina Democratic government lawyers argued on Tuesday, Dec. 6, before an appeals court deciding whether potential prosecution of Stein or others over a 2020 campaign commercial should be blocked further while his lawsuit continues. (AP Photo/Karl B DeBlaker, File)

RALEIGH, N.C. (AP) — Representatives for two elected North Carolina Democratic government lawyers argued on Tuesday before an appeals court deciding whether potential prosecution of Attorney General Josh Stein or others over a 2020 campaign commercial should be blocked further while his lawsuit continues.

In a 2-1 decision in August, the 4th U.S. Circuit Court of Appeals granted a temporary injunction to Stein’s campaign, which was worried a grand jury could soon indict Stein and advisers by attempting to enforce a state law making certain political speech a crime. Lawyers representing Stein and others have said the probe by Wake County District Attorney Lorrin Freeman should be stopped because the 1931 law should be struck down as unconstitutional.

On Tuesday, the same three-judge panel from August meeting in Richmond, Virginia, heard 45 minutes of oral arguments from private attorneys for Stein and Freeman about whether the injunction should be extended while Stein's lawsuit challenging the law is resolved. The judges didn't say when they would rule, but the two judges who voted for the temporary directive three months ago expressed skepticism about the law.

Any criminal action against Stein, a potential 2024 candidate for governor, could harm his political future.

Stein defended the 2020 commercial as a “corrective” to false accusations made by then-Republican AG challenger Jim O’Neill that Stein had failed to act on more than 15,000 untested rape kits since becoming attorney general in 2017. Stein’s ad accused O’Neill, the Forsyth County district attorney, of letting more than a thousand rape kits go untested.

While Stein never issued a complaint about O'Neill's claims, O’Neill complained to State Board of Elections at the time, citing the 1931 law.

The case ultimately was sent to Freeman, who recused herself from the investigation, leaving it to a senior assistant prosecutor. Stein's campaign sued in July after learning the DA’s office planned to soon send the case to grand jurors.

Tuesday’s arguments centered on the law's language, which makes it a misdemeanor for someone to help circulate “derogatory reports” about a candidate designed to harm their election chances while “knowing such report to be false or in reckless disregard of its truth or falsity.”

U.S. District Judge Catherine Eagles already previously refused to order Freeman to stop using the law to prosecute anyone over the disputed 2020 commercial. She wrote Aug. 9 that the law appeared to meet the standard for exceptions to the First Amendment that allows the criminalization of “false defamatory speech about public officials made with actual malice.”

Attorney Michael Dreeben, representing Stein and others, told the appeals panel that Eagles erred when she decided “derogatory reports” only addressed false statements. He said the law's construction also means true statements against a candidate that also are derogatory could be subject to criminal prosecution.

“This statute is one-sided in the kinds of speech that it affects in the electorate,” Dreeben said. “It says nothing about the candidate that chooses falsely to inflate the candidate’s credentials, to pollute the electoral process with false claims against himself.”

But Joe Zeszotarski, Freeman’s attorney, said a fair reading of the law makes it clear that only false derogatory reports related to political speech are criminalized.

“The statute has to be narrowly tailored to the compelling state interest of preventing fraud and libel in elections,” Zeszotarski said, adding that it requires a high bar to strike down a state law that the people have received through their elected representatives.

U.S. Circuit Judge Toby Heytens pointed to language that bases the crime on whether the derogatory report was intended to affect the candidate's chances of winning.

Heytens and Circuit Judge Albert Diaz agreed to the temporary injunction in August. Circuit Judge Allison Rushing wrote a dissenting opinion at the time and questioned both sides Tuesday.

Freeman won reelection last month as the DA for North Carolina’s largest county. But she has taken heat from fellow Democrats for considering such action. Democratic Gov. Roy Cooper, whom Stein succeeded as AG in 2017, called the potential prosecution as “an unprecedented repression of free speech.”