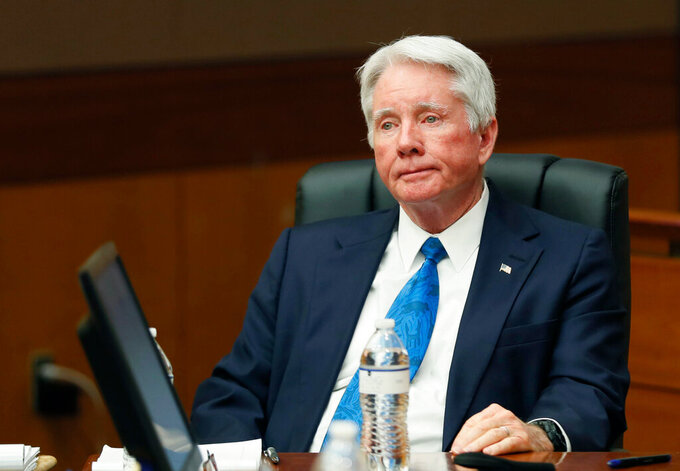 Bob Andres, ASSOCIATED PRESS
FILE - This April 17, 2018 file photo shows Claud "Tex" McIver, left, during closing arguments in McIver's trial at the Fulton County Courthouse, in Atlanta. Georgia's highest court on Thursday, June 30, 2022, threw out a murder conviction for the once-prominent Atlanta attorney who fatally shot his wife as they rode in an SUV, saying the jury should have had the option to convict him of on a misdemeanor involuntary manslaughter charge.(Bob Andres/Atlanta Journal-Constitution via AP)

ATLANTA (AP) — Georgia's highest court on Thursday threw out a murder conviction for a once-prominent Atlanta attorney who fatally shot his wife as they rode in an SUV, saying the jury should have had the option of a misdemeanor involuntary manslaughter charge.

Claud “Tex” McIver, 79, was convicted of felony murder, aggravated assault, influencing a witness and possession of a firearm during the commission of a felony in the September 2016 killing of his wife 64-year-old Diane McIver. He was sentenced in 2018 to serve life in prison for felony murder, five years for influencing a witness and a suspended five-year sentence for the gun charge.

“We conclude that the trial court erred in refusing McIver’s request to charge on the lesser grade of involuntary manslaughter, because the charge was authorized by law and some evidence supported the giving of the charge,” Presiding Justice Michael Boggs wrote in the unanimous opinion.

That means McIver is entitled to a new trial on the overturned charges.

“He was deprived of a fair trial because the jury was not given the opportunity to find that the shooting was entirely the result of negligence, as opposed to an intentional killing,” they said in an emailed statement. “He was entitled to a fair trial and did not get a fair trial. We look forward to showing the next jury that he is not guilty of murder.”

McIver has about two months left to serve on the witness tampering charge, though the state parole board could decide to let him out sooner, Clark Palmer wrote in an email. She said they plan to file a motion for bond and ask that he be released right away.

Fulton County District Attorney Fani Willis “will evaluate the case and make a decision on how to proceed in the near future,” spokesperson Jeff DiSantis said in an email. McIver was charged and tried under Willis' predecessor.

During his trial in the spring of 2018, no one disputed that McIver shot his wife. The question for jurors was whether they believed he meant to do it. Prosecutors alleged he killed his wife because he coveted her money. Defense attorneys refuted that, saying McIver deeply loved his wife and her death was a tragic accident.

The jurors in his trial acquitted McIver of malice murder but found him guilty of felony murder. Felony murder means a killing happens during the commission of another felony, in this case aggravated assault with a deadly weapon. That means the jury found that he intentionally shot his wife, and that led to her death.

The McIvers were wealthy and well-connected. He was a partner at a prominent labor and employment law firm and served on the state election board. She was president of U.S. Enterprises Inc., the parent company of Corey Airport Services, where she had worked for 43 years.

Dani Jo Carter, a close friend of Diane McIver, was driving the couple’s Ford Expedition the evening of Sept. 25, 2016, as the three returned from a weekend at the McIvers’ horse farm about 75 miles (120 kilometers) east of Atlanta. Diane McIver was in the front passenger seat and Tex McIver was in the back seat behind his wife.

With traffic heavy on the interstate, Carter exited in downtown Atlanta. McIver said, “Girls, I wish you hadn’t done this. This is a really bad area,” and asked his wife to get his gun from the center console and hand it to him. A short while later, McIver fired the gun once, striking his wife in the back. Carter drove to a hospital where Diane McIver died.