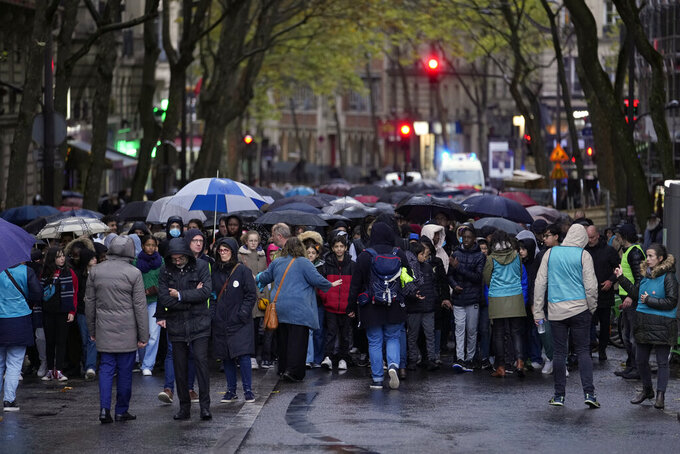 Thibault Camus, ASSOCIATED PRESS
The relatives and family of a 12-year-old Parisian girl who was brutally killed and found in a plastic box is leading a silent march in her honor, through the neighborhood where young Lola lived, in Paris, Wednesday, Nov. 16, 2022. Her parents delayed the march for weeks because the girl's death had turned into a political flashpoint. The family begged politicians to stay away from Wednesday's march, to respect the girl's memory. (AP Photo/Thibault Camus)

PARIS (AP) — The family of a 12-year-old French girl who was brutally killed and had her body found in a plastic box led a silent march Wednesday in her honor through their Paris neighborhood.

The parents of the girl, identified publicly only as Lola, delayed the march for weeks because their daughter's death last month became a political flash point. Her middle school classmates attended Wednesday's event, but the family begged politicians to stay away out of respect for her memory.

People across France with anti-immigrant attitudes seized on Lola's slaying because the main suspect is an Algerian woman who had been ordered to leave France.

The suspect is in custody on charges of murder and rape of a minor, torture, acts of barbarity and concealment of a corpse, according to prosecutors. A judicial investigation is underway.

Lola’s father reported his daughter missing after she failed to return home from school one day. Her body was found in a plastic box in the courtyard of the Paris building where the family lived.

The girl's full name has not been released for legal reasons.

Conservative and far-right politicians accused the government of French President Emmanuel Macron, who received the girl’s parents at the presidential palace to offer condolences, of being soft on immigration and say it should more aggressively expel foreigners.

Advocates for asylum-seekers say French authorities are too hard on migrants, who often face discrimination, violence and huge bureaucratic hurdles to getting residency rights.

The debate resurfaced in recent days amid controversy over France’s decision to take in 234 people who were rescued on the Mediterranean Sea, while attempting to migrate to Europe.