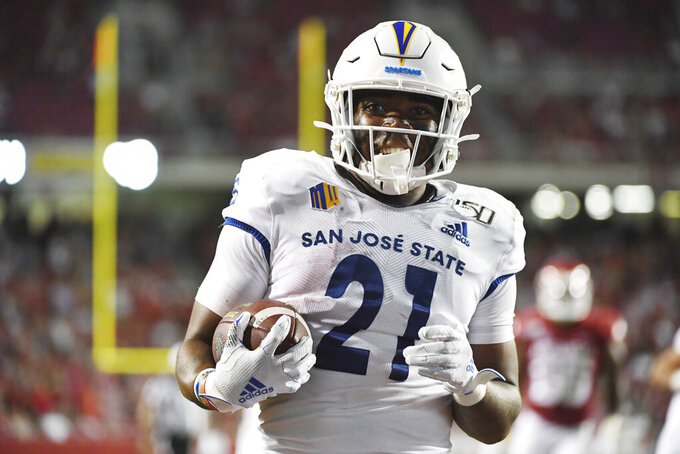 Michael Woods, ASSOCIATED PRESS
FILE - San Jose State running back De'Jon Packer breaks through the Arkansas defense to score a touchdown during the second half of an NCAA college football game, on Sept. 21, 2019, in Fayetteville, Ark. Packer, a rookie with the San Jose Police Department, was found unresponsive March 13, 2022, during a welfare check at his Milpitas, Calif., home. Packer's death was caused by “fentanyl toxicity,” coroner's officials said. (AP Photo/Michael Woods, File)

De'Jon Packer, a rookie with the San Jose Police Department, was found unresponsive March 13 during a welfare check at his Milpitas home.

The Santa Clara County Medical Examiner’s confirmed to NBC Bay Area on Saturday that Packer died of a drug overdose. The death remains under investigation by Milpitas police.

San Jose police Chief Anthony Mata said in a statement that his department is cooperating with the Milpitas investigation, adding, “This behavior is not something we condone.”

“We need to be mindful of the fact that we are not immune to issues that plague society, in this case substance abuse,” Mata said. “Any allegation of illegal drug use by a San Jose Police officer is concerning. There are no free passes for police officers, and we will not make excuses."

Packer was a star running back at San Jose State University before becoming a police officer.

“We all loved DeJon Packer and we will miss his infectious smile,” SJSU football coach Brent Brennan said in a statement.