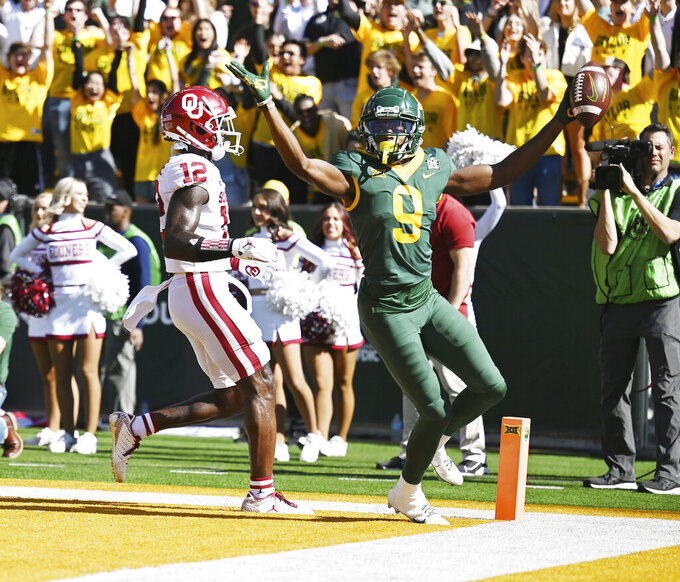 Line: Baylor by 1/2, according to FanDuel Sportsbook.

The Bears gave themselves a chance to reach the Big 12 title game with last week's win over Oklahoma. Now, they need to beat Kansas State to keep those hopes alive. The Wildcats have won four straight since a three-game losing streak to reach bowl eligibility, and now they want to improve their positioning over the final two games.

Kansas State DE Felix Anudike-Uzomah against the Baylor offensive line. Anudike-Uzomah has forced four fumbles over the past three games, including one last week against West Virginia. The sophomore from suburban Kansas City also has five sacks over the same span to reach 11 for the season.

Baylor: RB Abram Smith is riding a string of four consecutive 100-yard rushing games after going for 148 in last week's win over Oklahoma. He's third in the Big 12 with 1,055 yards rushing to go with 11 touchdown runs.

Baylor is seeking its four straight win over the Wildcats, which would tie the longest win streak in series history. The Bears also are 3-1 in Manhattan after losing in their first four trips. ... Baylor held Oklahoma to its lowest scoring output (14 points) and lowest total yardage (260) in five years under Lincoln Riley last week. ... The Bears are among six teams nationally to not allow more than 30 points in a game. ... Baylor has forced a turnover in 18 consecutive games. ... Smith ranked third nationally with 7.34 yards per carry and fifth in yards rushing. The Bears' Jalen Pitre is the only player nationally with at least three forced fumbles, three fumble recoveries and two interceptions. ... Vaughn is eighth nationally with 1,414 yards from scrimmage to go with 16 total touchdowns. ... Kansas State is outscoring opponents a Big-12 best 98-37 in the fourth quarter. ... The Wildcats are 6-0 when they have a 100-yard rusher this season.