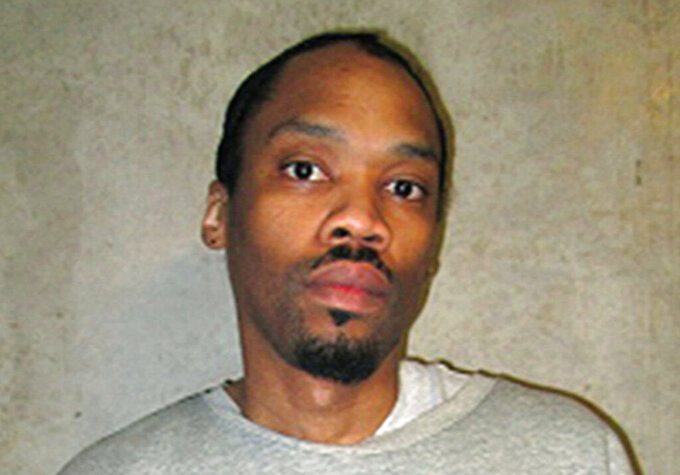 Uncredited, ASSOCIATED PRESS
FILE - This photo provided by the Oklahoma Department of Corrections shows Julius Jones Feb. 5, 2018, file. Oklahoma Gov. Kevin Stitt has agreed to commute the death sentence of condemned inmate Julius Jones, who was convicted of murder for a 1999 killing. Stitt announced his decision on Thursday, Nov. 18, 2021, the day of Jones’ scheduled execution. (Oklahoma Department of Corrections via AP, File)

OKLAHOMA CITY (AP) — Julius Jones' execution was halted Thursday, less than four hours before he was scheduled to receive a lethal injection following outcry over doubts about evidence at his murder trial nearly 20 years ago.

The clock was ticking for Jones as Oklahoma Gov. Kevin Stitt weighed whether to spare his life. Shortly after noon Thursday, the Republican governor announced he had granted Jones clemency. Instead of allowing the execution to proceed, Stitt said he was commuting Jones' sentence to life in prison without the possibility of parole.

Jones, now 41, was convicted and sentenced to die for the 1999 shooting death of Paul Howell, a businessman from an affluent Oklahoma City suburb. Jones has consistently maintained his innocence.

The case has increasingly drawn attention since it was profiled in “The Last Defense,” a three-episode documentary produced by actress Viola Davis that aired on ABC in 2018 and outlined some of his defense team's allegations. Since then, reality television star Kim Kardashian West, who visited Jones in prison, and athletes with Oklahoma ties, including NBA stars Russell Westbrook, Blake Griffin and Trae Young, have urged Stitt to commute Jones’ death sentence and spare his life. This week, Ambassador of the European Union to the U.S. Stavros Lambrinidis sent a letter to Stitt, urging him to grant Jones clemency.

Following are some of the key arguments made by Jones' attorneys, the response from prosecutors and how the case got here.

Paul Howell's sister, Megan Tobey, who was an eyewitness to her brother's killing, testified in court that the gunman was wearing a stocking cap that came down “about a half an inch to an inch" above his ears, and that hair was sticking out from both sides. Jones' attorneys suggest this was a better description of Jones' co-defendant who testified against him, Christopher Jordan, who had corn-row braids at the time, and that the jury was never shown a photo of Jones taken a week before the murder that showed him with short, close-cropped hair. Jones has long said he was framed by Jordan, and that Jordan is the actual killer.

But prosecutors say Tobey testified she never saw braids and that her testimony was referring to how much hair was visible between the top of the ear and the stocking cap, not the hair length. Prosecutors also note that a federal district court addressed this issue, noting “the length of (Jones') hair compared to Mr. Jordan's is not a persuasive showing of actual innocence."

Jones and his family have maintained that he was at home with them on the night of Howell's murder, eating dinner and playing games with his siblings, and that the jury was never presented this information at trial.

Prosecutors say this is a “blatant falsehood," and that Jones' trial attorney never called the family to the witness stand because Jones repeatedly told his attorneys that he was not at home on the night of the murder. They also note that three people saw Jones with Howell's stolen Suburban shortly after the killing. Even Jones' trial attorney, David McKenzie, wrote in an affidavit that he “personally concluded that the alibi defense was untrue."

Jones' attorneys say the jury also never heard from several individuals who have testified that Jordan admitted killing Howell and framing Jones. Prosecutors say those individuals, all of whom have lengthy criminal records, were not credible, knew no details of the murder and that their testimonies were not corroborated.

A juror in Jones' trial wrote in an affidavit after Jones' conviction that during the trial another juror engaged in premature deliberations and used a racial epithet while saying they should take Jones behind the jail and shoot him. Prosecutors argue that when the trial judge asked her about this allegation the day after the alleged incident, she never mentioned the racial epithet. And the judge's bailiff signed an affidavit saying the juror never reported this, as she said she did.

WHAT LED TO CLEMENCY?

Lawyers for Jones filed a last-minute request Thursday morning as they waited for word from Stitt.

Prior to that, Oklahoma's Pardon and Parole Board had voted 3-1 to recommend to the governor that Jones' death sentence be commuted life in prison with the possibility of parole, each time citing doubts about the evidence in the case.

Stitt appointed two of the three members who voted to recommend clemency: Adam Luck and Kelly Doyle. The third member, Larry Morris, was appointed by the Court of Criminal Appeals.

“Personally, I believe in death penalty cases there should be no doubts. And put simply, I have doubts about this case,” Luck said on the day of Jones’ clemency hearing.

Stitt has said little publicly about his decision, so his reasoning is unclear.

Instead of going with the parole board's full recommendation, he decided Jones should not have a chance to seek parole and be released from prison.

“After prayerful consideration and reviewing materials presented by all sides of this case, I have determined to commute Julius Jones’ sentence to life imprisonment without the possibility of parole,” Stitt said Thursday in a statement.