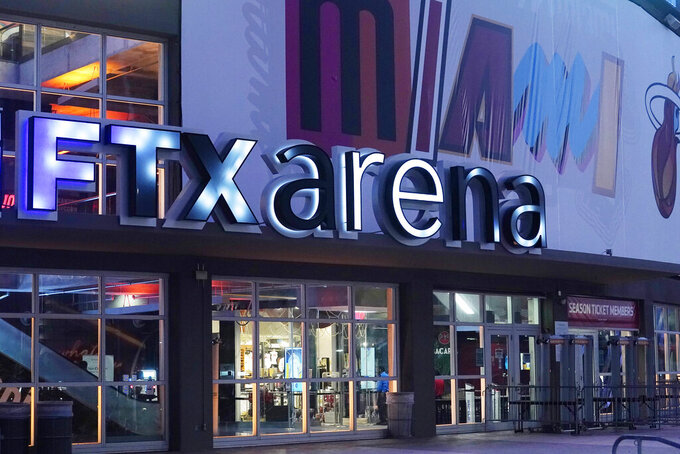 NEW YORK (AP) — Just days after cryptocurrency's third-largest exchange collapsed, the public is starting to get an idea of how messy FTX's bankruptcy case could be. Other crypto firms are failing as a result of FTX's unraveling, events reminiscent of the domino-like meltdowns of the 2008 financial crisis.

Users remained frustratingly in the dark Tuesday about when they might get their funds back, if at all, directing much of their anger toward FTX's founder and CEO, Sam Bankman-Fried.

In a court filing, FTX's lawyers said there were already more than 100,000 claims against the company and estimated that figure could grow to more than 1 million, most of them customers, once the case is complete. The court ordered FTX to provide at least a list of the company's 50 biggest creditors by Nov. 18.

The lawyers said the company is in contact with the Department of Justice, the Securities and Exchange Commission, the Commodity Futures Trading Commission as well as dozens of other state, federal and international authorities, confirming earlier reports that the U.S. government is probing the possibility that Bankman-Fried and his lieutenants violated U.S. securities law.

FTX filed for bankruptcy protection Friday, sending tsunami-like waves through the cryptocurrency industry, which has seen a fair share of volatility and turmoil this year, including a sharp decline in price for bitcoin and other digital assets. For some, the events are reminiscent of the failures of Wall Street firms during the 2008 financial crisis, particularly now that supposedly healthy firms like FTX are failing.

The Wall Street Journal reported that BlockFi, which had halted withdrawals over the weekend following FTX’s bankruptcy, is now actively considering bankruptcy and plans to lay off its staff. In previous public comments, BlockFi's management made it clear that FTX's failure had pushed the company towards being out of business. FTX had provided financial aid to BlockFi this summer, including a $400 million credit facility backed by its own balance sheet.

“We are shocked and dismayed by the news regarding FTX and Alameda,” BlockFi said Saturday, referring to FTX and Bankman-Fried's hedge fund Alameda Research. “Given the lack of clarity on the status of FTX.com, FTX US and Alameda, we are not able to operate business as usual.”

Another crypto firm, crypto lending firm SALT Blockchain, also appeared to be on the verge of failure. The company Bnk to the Future pulled out of its agreement to buy SALT, citing its exposure to FTX. In tweets, SALT's CEO Shawn Oren said he is “fully committed still to recover from the damages as victims.”

In a sign of how fearful investors are that the cascading effects could do long-term damage, cryptocurrency exchange Binance proposed the creation of a rescue fund that would save otherwise healthy crypto companies from failure. Binance's founder and CEO Changpeng Zhao effectively laid out the possibility of a crypto-like central bank or deposit-insurance pool to be a lender of last resort to keep healthy firms from failing.

Meanwhile, FTX's users bemoaned their losses in Telegram chat groups for traders who used the FTX exchange, writing that they’d lost access to amounts ranging from thousands to millions of dollars.

Some pleaded for information. Others speculated on the likelihood of getting back their funds, while others counseled that they should accept that their investments were gone.

Moderators for one group posted intermittently, saying things like, “No death threats please.” They wrote that they had no information about the whereabouts of Bankman-Fried or what would happen to his companies.

“No news,” posted one moderator.

Many of FTX's users pointed to Bankman-Fried as responsible, making puns on his name like “Sam Bankrun-Fried” and calling for him to be prosecuted.

An electrical engineer based between New Delhi and Dubai, he started trading in 2017 and quit his job in 2018 to work full time trading cryptocurrencies. Along with a business partner, he built a custom algorithm, and grew an investment of a couple thousand dollars into a sum many times that size, though he didn’t want to disclose the value of his holdings when he lost access to them.

It’s not clear what will happen to the funds of retail investors like Sorout, which are locked within the FTX ecosystem. His requests to withdraw the funds were not honored last week and now he can’t even log onto the exchange, he said on Monday.

Sorout didn’t intend to keep all of his investments on a single platform, he said, but the tools that FTX had built for traders like himself were very effective and his algorithm worked well there. He also trusted Bankman-Fried in part because of his high profile.

“The problem was the founder, who is donating eight figures in presidential campaigns, he’s meeting with the top bureaucrats, he is sponsoring chess tournaments, he’s out there sponsoring stadiums,” Sorout said. “You don’t really expect such a huge business, especially the CEO of that business, to defraud its customers, you know?”