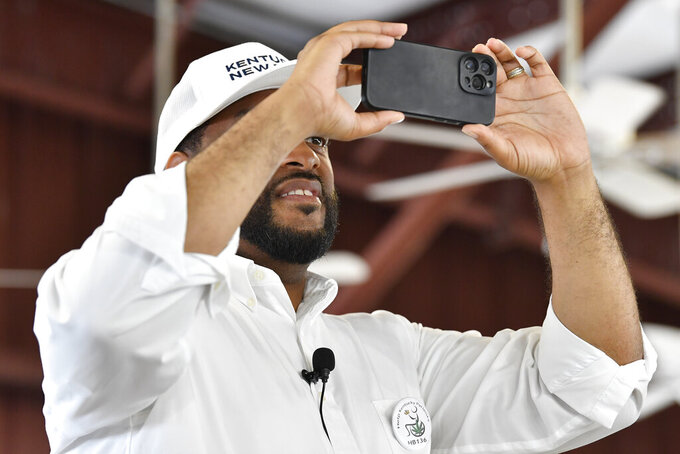 Paul, a Republican, has repeatedly clashed with Dr. Anthony Fauci over the government's COVID-19 policies and the origins of the virus that caused the global pandemic. Paul's wife, Kelley, waded into the dispute while promoting her husband's candidacy during the political speaking at the Fancy Farm picnic in western Kentucky. Paul is seeking a third term and is being challenged by Democrat Charles Booker on November's ballot.

“Now I promise you this, come November when we win, Rand Paul will subpoena every last document of Dr. Fauci’s,” Kelley Paul said.

Sen. Paul and other conservative critics have focused their ire at how the pandemic was handled on Fauci. Paul has promised to wage a vigorous review into the origins of the coronavirus if Republicans retake the Senate and he lands a committee chairmanship. The Senate currently has a 50-50 split, but Democrats have the edge with Vice President Kamala Harris’ tie-breaking vote.

Continuing her comments about Fauci, Kelley Paul said: “Now some people ask why me, why is Rand so hard on poor Dr. Fauci? Well it's simple, because the American people deserve the truth.

“We deserve the truth about the origins of a virus that killed millions of people,” she added.

U.S. intelligence agencies remain divided on the origins of the coronavirus but believe China’s leaders did not know about the virus before the start of the global pandemic, according a Biden-ordered review that was released last summer.

Booker, a former state lawmaker, told the picnic crowd that Paul votes against the interests of Kentuckians, denouncing him as a “terrible senator” and an “embarrassment” to the state.

Meanwhile, Paul has access to "the best health care your tax dollars can buy,” Booker said.

The event gave Booker a chance to make inroads against Paul, with a statewide television audience watching the speeches that also featured GOP candidates running for governor in 2023. The Fancy Farm political speaking is the traditional start of the fall campaign in Kentucky.

Speaking to jeering Paul supporters, Booker said: “Even if you boo, I'm fighting for you to get quality health care.”

Booker and Paul's wife spoke to a boisterous crowd of Republicans and Democrats. The event is a rite of passage for statewide candidates, who are tested in stump-style speeches in the August heat while facing taunts and shouts from partisans from the other party.

In her speech, Kelley Paul also focused on surging inflation, and the strain it's putting on family budgets, at a time when Democrats control the White House and Congress.

“Democrat policies are killing the middle class," she said. "Record inflation, soaring gas prices, empty shelves. The economy is tanking and every American knows it.”

Booker is a progressive who promotes such social programs as Medicare for All and a basic universal income, saying the initiatives would help people in both poor urban neighborhoods and struggling rural communities. He also supports a clean-energy agenda and criminal justice changes.

Paul was first elected to the Senate in the tea party-driven wave of 2010. Paul rails against socialism and big-government programs he says encroach on individual liberties and drive up the nation’s debt.

Booker is the first Black Kentuckian in state history to be the Democratic nominee for U.S. Senate.

Kentucky hasn’t elected a Democrat to the U.S. Senate in three decades.