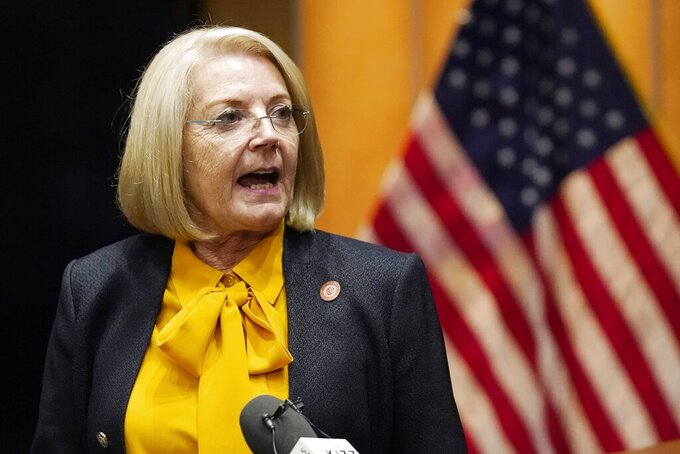 The FBI actions are part of a flurry of recent activity by the Department of Justice as it seeks information from people involved in efforts to discredit the 2020 election results. It is separate from the congressional inquiry into the Capitol insurrection.

Fann said on Friday that virtually all her email and text message communications are already public. That's because of records requests and lawsuits by news media groups and American Oversight, a watchdog group that has sought records related to the Senate's “audit” of election results in the state's most populous county.

“I’m pretty sure every single thing that they’re requesting is stuff that’s already out there,” Fann said in a Friday interview. “I told him, 'You know what, I have been FOIA-ed almost every week for 18 months. And so I don’t think there’s anything left there that everybody hasn’t seen yet.”

FOIA is an acronym for freedom of information request.

Fann said an FBI agent called her last week seeking to interview her about her contacts with more than a dozen people, but she told him he would need to put the request in writing.

The subpoena was served on June 22 and accepted by a Senate lawyer, Fann said. That was the day after Republican House Speaker Rusty Bowers testified before the congressional committee investigating the attack on the Capitol about Trump's efforts to get him to replace Arizona electors committed to Joe Biden.

Fann declined to identify the people listed on the subpoena or provide other details, saying the subpoena instructed her not to discuss its contents.

The same day Fann was served, federal agents searched the home of a former top Justice Department official, Jeffrey Clark, who was known for championing Trump's false claims of election fraud. Party leaders in Nevada and Georgia, states that went for President Joe Biden and where Trump allies created slates of “alternate electors” intended to subvert the vote, also got subpoenas. And Republicans in two other states — Michigan and Pennsylvania — disclosed they had been interviewed by the FBI.

Fann said she will cooperate fully and believes the Justice Department is trying to get information from anyone at all connected to Trump's effort, no matter how innocuous. She has consistently said the Senate's audit was not part of any effort to overturn the election, just a way to determine if questions about the election raised by Republicans were justified.

“So anybody and everybody," she said. "And the mere fact that I’m the Senate President and our Senate caucus ordered the audit to answer our constituents' questions, therefore, I’m part of the mix at this point because I dared to ask for an audit to see if our laws were being followed or not.”

Fann hired inexperienced consultants to run what she characterized as “a forensic audit” of the 2020 election in Maricopa County, which includes the Phoenix area. The review was led by Trump supporters who promoted his false narrative about election fraud and produced a report that supported President Joe Biden's victory in the county but raised discredited allegations of wrongdoing.