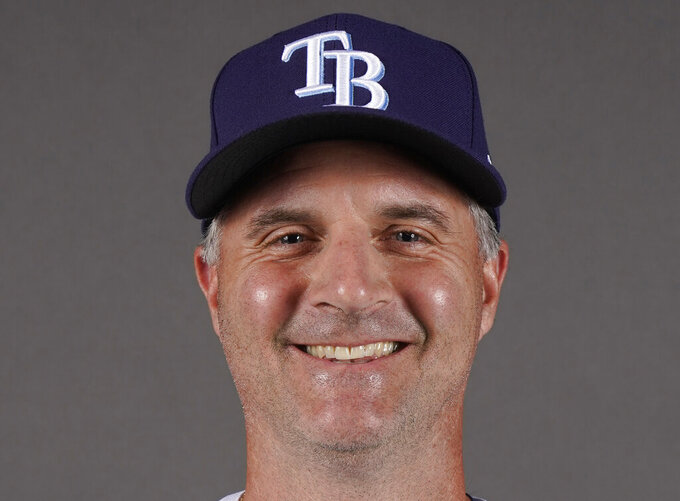 Wilfredo Lee, ASSOCIATED PRESS
FILE - This is a 2022 photo of bench coach Matt Quatraro of the Tampa Bay Rays baseball team. On Sunday, Oct. 30, 2022, the Kansas City Royals hired Quatraro as manager, turning over the young core of a rebuilding franchise to a forward-thinking manager with experience winning in a small market. (AP Photo/Wilfredo Lee, File)

Quatraro replaces Mike Matheny, who was fired as part of a wide-spread shakeup within the Royals after a 65-97 finish for their sixth straight losing season. Quatraro was chosen by Royals general manager J.J. Picollo, who took over as head of the club's baseball operations after the firing of longtime front-office executive Dayton Moore.

“We are extremely excited to have Matt leading our club and core of talent,” Picollo said in a statement. “Matt has great experiences throughout his career that have prepared him for this. He thoroughly impressed us all during our interview process and is clearly respected across the industry.”

The Royals interviewed their own bench coach, Pedro Grifol, along with third base coach Vance Wilson and Triple-A Omaha manager Scott Thorman. They also expressed interest in Los Angeles Dodgers first base coach Clayton McCullough and Boston Red Sox bench coach Will Venable, who have been linked to manager openings elsewhere.

One of the priorities that owner John Sherman had in overhauling the front office was that it lean more heavily on advanced analytics. And the 48-year-old Quatraro reflects that same emphasis in the manager; the Rays have excelled in using analytics to guide their decision-making, allowing them to consistently compete despite modest payrolls.

“I do think the managerial position has changed,” Picollo said. “You talk to players around the league, executives — there are things teams are doing that are pretty advanced. Our goal is to find out what those things are and implement them here.”

Tampa Bay has had five straight winning seasons while playing in the rugged AL East.

Quatraro, who interviewed for the Mets and A’s manager jobs last season, will take over one of the youngest teams in baseball, flush with up-and-coming talent such as AL rookie of the year candidate Bobby Witt Jr., catcher MJ Melendez and first baseman Vinnie Pasquantino. However, there is a dearth of pitching prospects across the organization.

"I’m grateful to Mr. Sherman and the ownership group, J.J. and the front office, and everyone else with the Royals for this opportunity,” Quatraro said. “I already knew the talent on the roster and how great the fans in Kansas City are, and the interview process convinced me that the terrific things I’d heard about the organization’s culture are true. I can’t wait to get started, and for my family to get to Kansas City and be part of that community.”

Quatraro starred as a college catcher at Old Dominion before the Rays chose him in the eighth round of the 1996 first-year player draft. And while he eventually reached the Triple-A level, Quatraro never appeared in a major league game.

After retiring as a player, Quatraro began working as an instructor in the Rays' minor league system. He started out as a hitting coach for Class A Hudson Valley but eventually rose to become the franchise's minor-league hitting coordinator.

He was hired by Cleveland as its assistant hitting coach in 2010, and worked alongside manager Terry Francona through the 2017 season — a period in which Sherman was a minority owner of the franchise.

Quatraro eventually returned to the Rays as their third base coach, and when Charlie Montoyo was hired as manager of the Blue Jays after the 2018 season, he was promoted to bench coach. He had served since as a sounding board for Rays manager Kevin Cash, helping the club win two division titles and make four straight playoff appearances.

The Rays were swept by the Guardians earlier this month in their AL wild-card series.

“J.J. and his staff designed and executed a rigorous process that revealed Matt to be the best leader for our club,” Sherman said. “Matt is widely respected throughout baseball with a proven record and tangible contributions in two organizations that built winning cultures through creativity and innovation. We are thrilled to welcome Matt, his wife Chris, and sons George and Leo to the Kansas City community.”