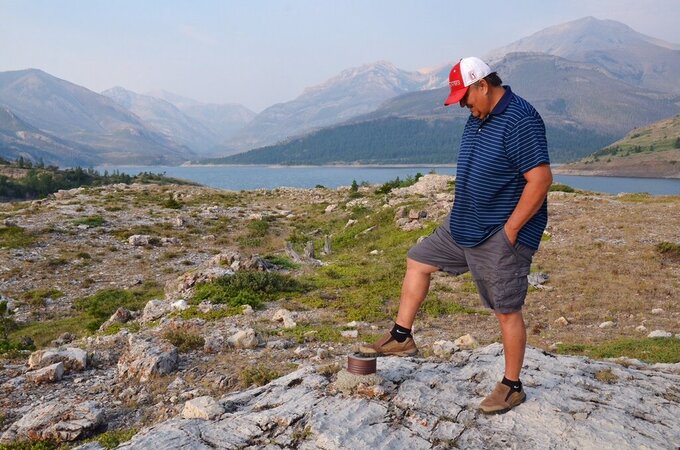 Rob Chaney, ASSOCIATED PRESS
FILE - In this July 2021 file photo, with the peaks of the Badger-Two Medicine rising behind him Keith Tatsey toes a Bureau of Reclamation boundary marker indicating the edge of the Blackfeet Indian Reservation. Tasty and his brother, Terry Tatsey, spent a week in July with friends and family in the area to swap stores of hunting trips, took children on horseback rides and watched traditional dances and played traditional games. (Rob Chaney/The Missoulian via AP, File)

Heart Butte, Mont. (AP) — The fight to protect the Badger-Two Medicine defends not so much a place as a way of living.

On a map, this jumble of mountains, rivers, hunting grounds and petroleum deposits is surrounded by the Blackfeet Indian Reservation, Glacier National Park and the Bob Marshall Wilderness Complex.

In the memories of brothers Terry and Keith Tatsey, the landscape made them who they are. It educated them, matured them, and showed them where they fit in their Blackfeet tribal family, the Missoulian reported.

At the foot of the blocky concrete dam impounding the North Fork of Birch Creek, the Tatsey brothers spent a smoky July week reminding their friends and relations why the place matters. By the light of a battery-powered lantern (wildfire risk prohibited campfires), they swapped stories of hunting mishaps, and swimming in frozen lakes, and finding herds of elk on mountaintop meadows.

They led horse rides around Swift Reservoir with children who’d never been on horseback. They invited traditional dancers to share steps and rhythms of dances rarely seen at powwows. They sat in lines for stick games, teaching the uninitiated the subtleties of gambling on which hand held the hidden bit of wood.

“We want to make sure when future generations come here, that they follow our traditions,” Terry Tatsey said, gesturing toward Swift Dam and the wild country beyond. “They should stop here and ride horses or walk in. That’s the only way to access the mountains. When you bring other things in, the spirits move out. They provide us with the guidance we need. We hope they stay.”

The Tatsey brothers’ grandfather was Francis “Big Man” Bullshoe, a descendant of the Chief Bullshoe who negotiated with George Bird Grinnell over a strip of the former Blackfeet Reservation that later became the eastern half of Glacier National Park.

The Blackfeet refer to it as the “Ceded Strip,” and recall the deal as a 50-year lease rather than a permanent sale. While it didn’t become part of Glacier, the Badger-Two Medicine region did get carved off the Blackfeet Indian Reservation.

In the 1980s, President Ronald Reagan’s Interior Secretary James Watt opened much of the Bob Marshall Wilderness Complex and surrounding public lands to energy exploration. The federal government sold 47 leases to prospectors planning to drill for oil and natural gas in the Badger-Two Medicine.

Blackfeet Tribal Preservation Officer John Murray remembered the Tatsey brothers introducing him to the Badger-Two Medicine when they were all in grade school, and how the place had an immediate effect on him. But explaining that effect has remained culturally difficult.

“When Watt opened the Badger-Two Medicine to leases, the (Lewis and Clark National) Forest Supervisor, Dale Gorman, arranged to meet with the elders at Blackfeet Community College,” Murray said. “He tried to do his best. He asked the elders: ‘Tell me where the sacred sites are, and we’ll put protections there and throw the rest open to oil and gas development.’ That’s where the impasse occurred. That’s not the way we interpret the land.”

One of those lessees was Sydney Longwell and his New Orleans-based Solenex LLC. In 1982, he laid claim to 6,247 acres along Hall Creek, southwest of East Glacier, paying $1 an acre. He renewed his permits four times but never got around to developing them.

Meanwhile, the Lewis and Clark National Forest, which oversees the Badger-Two Medicine region, proposed a travel management plan envisioning lots of motorized recreation there. That also drew concern from the Blackfeet, who pushed for archaeological inventories of their cultural heritage in the area to oppose increased vehicle use.

Longwell and Solenex renewed their effort to explore for energy in 2013 and tried to get the suspensions lifted. That triggered the latest court battle, during which the Blackfeet convinced the National Historic Preservation Board to declare the Badger-Two Medicine a Traditional Cultural District. In 2016, President Barack Obama’s Interior Department canceled the leases.

Unlike other leaseholders, Solenex refused to accept a buyout offer on its claim and continued the legal fight. A federal appeals court upheld the lease cancellations in 2020, but allowed Solenex’s lawyers to offer some different arguments.

Earthjustice attorney Tim Preso, who represents a coalition of conservation groups fighting the leases, said a federal judge must now decide if those arguments have been made too late.

In an unforeseen twist, President Donald Trump’s Interior Secretary Ryan Zinke proposed making the Badger-Two Medicine into a National Monument at the same time he was ordering reductions of Bears Ears and Grand Staircase-Escalante national monuments in 2017.

“I think there’s a really great opportunity for the Badger-Two Medicine as the number of crowds and visitors continue to break records in Glacier (National Park),” Zinke said at the time. “Here’s a virtually untapped area and a chance to do it right. There’s the possibility of revenue from tourism and an untapped culture. I think it’s deserving of monument status.”

Zinke resigned his Interior post in 2019 after numerous ethics investigations into his travel practices and official actions. He is now running for Montana’s soon-to-be-created second congressional district as a Republican.

Then last year, Sen. Jon Tester introduced a bill to make a Badger-Two Medicine cultural heritage area. It would have designated 127,000 acres slightly differently than the Bob Marshall Wilderness or the Lewis and Clark National Forest, with allowances for livestock grazing and existing structures but prohibitions on commercial timber harvest, wheeled travel and new construction.

That bill has not been reintroduced in the latest congressional session. A Tester spokesman said the senator is waiting for the results of discussions between the Blackfeet and Forest Service on some management options before proceeding.

Many Blackfeet think the Badger-Two Medicine should be reattached to the reservation. Tarissa Spoonhunter teaches American Indian studies at Central Wyoming College and argues the history of the treaty negotiations indicates the Tribe never intended to sell the land.

“Look at the names on the map — Bullshoe, Running Owl — they’re all tied to families who used the Badger-Two Medicine,” Spoonhunter said. “How do we restate that this is our land? It’s in those names.”

In her telling, the landscape itself tried to have a say.

“We took the Forest Service in on horseback,” Spoonhunter said. “As we were going up we saw an eagle flying above. When we got on top of the ridge, there was a cow elk watching us. And looking down, there was a beaver dam below as we made our way to the proposal site.

“We use the eagle in all of our ceremonies,” Spoonhunter said. “The elk is in our food ceremonies. And the beaver is the central bundle (of sacred items for spiritual leaders). We asked the Forest Service to include the animals and plants in the cultural district, but they said no.”

He kept the camp running until 1999, when it became too much effort to sustain. The gathering this July was the first time he’d reestablished the practice in 21 years. About 60 people came to the public campground at the foot of Swift Dam, ranging from elders in wheelchairs to toddlers on mother’s laps.

“I’m hoping that us doing more things like this will get more of us out here,” said Leah Whitford, a former state senator from Browning and camp organizer. “It’s so important. Without others giving me that foundation, I wouldn’t be out here.”

Keith Tatsey was 9 years old when he changed from “being a nuisance to being a resource” — mature enough to join his elders at hunting camp in the Badger-Two Medicine. He got to make the seven-hour horse ride up Birch Creek and over the Continental Divide to the fall elk hunt.

Terry Tatsey remembered how the older hunters were “strict to the point of being mean,” as they brought up the youngsters in the traditions of hard work and safety. Those too young to carry a rifle had to carry water, cut wood and tend the horses.

In Keith’s telling, elk and deer were willing to provide their meat to worthy people. But they would test each hunter. Elders advised him never to take more than four shots — a deer spirit would taunt an immature hunter into wasting his ammunition on the first day, dooming him to camp drudgery.

“It was about maintaining relationships,” Terry Tatsey said. “We’d go from noise-makers to worker bees and now teachers. They knew we’d eventually be responsible.”

The hunters would spend four to six weeks in the mountains hunting game, gathering berries and processing everything for winter use. They’d trim the meat off the skeletons of elk and deer, then smoke and dry it to reduce the weight.

“We hauled everything back on horses,” Terry Tatsey said. “When it’s fresh, you can maybe get the meat of one or one and a half elk on a horse. When it’s cured, you can get two elk and your personal belongings on the horse.”

The camp would move regularly so its horses didn’t overgraze all the meadows. By the third or fourth week, the hunters would be almost back to the edge of the Rocky Mountain Front.

On the last week, the hunters would go after fresh kills to provision a feast. The families and those too old to ride to camp would meet them in the foothills and celebrate the camp’s success with a distribution of the season’s bounty.

“This place has had thousands of years of use,” Keith Tatsey said. “That doesn’t fit into a 10-year or 25-year management plan. It’s really hard for the Forest Service and National Park Service to understand our connection to that landscape, that ecosystem.”

Relating to the land

Jesse DeRosier teaches the Blackfoot language at the Cuts Wood School in Browning. Understanding how Blackfoot differs from English helps explain how the Blackfeet people relate to the Badger-Two Medicine, he said.

“In a verb-based language, everything is animate, so there’s no need for ownership. Everything has its own respect and life — the environment, the water, rocks, trees, stars. It changes the concept of time. When time is linear, you can own anything. When time is ever-moving and evolving, then the only thing we truly own is our bodies, which belong to the earth. And that’s where we come from and where we go.”

Going into the Badger-Two Medicine, on foot or on horseback, without cellphones, was the point of the traditional skills camp. Finding the game trails, tasting the spring water, collecting the ripe berries was all part of the education the land had to give.

Listening to the Tatsey brothers and their fellow Blackfeet elders swapping stories under the stars offered another way to understand the difference. They did not talk of favorite places. They recalled what they did in the Badger-Two Medicine.