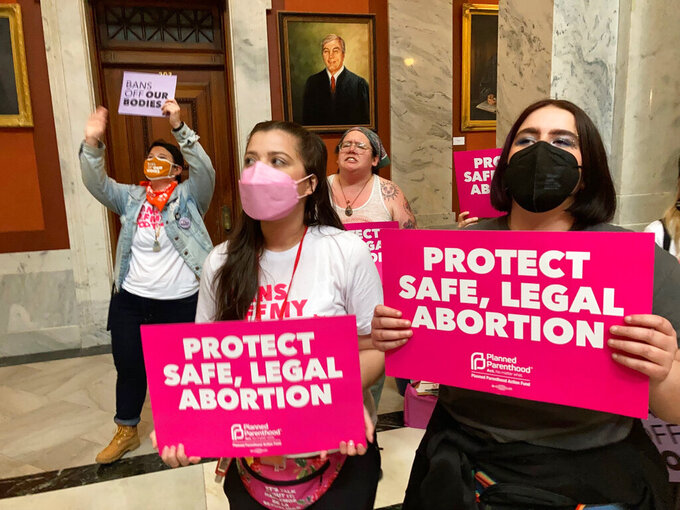 LOUISVILLE, Ky. (AP) — Attorneys for Kentucky’s two abortion clinics sought an injunction in court Wednesday to block the state's near-total ban on the procedure, one of numerous such efforts across the country following the U.S. Supreme Court's ruling overturning Roe v. Wade.

Jefferson Circuit Judge Mitch Perry issued a temporary restraining order blocking the state's abortion ban last week, and the two clinics, both in Louisville, resumed performing abortions. If granted, the injunction would suspend the state law while the case is litigated.

The injunction hearing on Wednesday was focused on potential harms that could be caused by keeping the abortion ban in place. Perry indicated it could be weeks before he rules on the injunction, but will keep the restraining order in place during that time.

Dr. Ashlee Bergin, who performs abortions at Louisville’s EMW clinic and was the first witness called by the clinics’ attorneys Wednesday, testified about the many possible health risks of pregnancy. Bergin cited statistics showing that pregnancy can be more dangerous to the health of a mother than abortion.

Vic Maddox, a deputy attorney general, asked Bergin during cross-examination to provide details of abortion procedures, prompting Perry to ask Maddox to “be less graphic.” Maddox also asked Bergin if she considers the fetus to be her patient, along with the mother.

“I don’t view it in those terms,” Bergin responded.

Witnesses called by the attorney general's staff argued that the life of the fetus must also be accounted for when considering harm.

"You have to consider the other side as well ... the rights of the prenatal human being," O. Carter Snead, a Notre Dame bioethics professor, testified.

In the lawsuit seeking the injunction, attorneys for the clinics argued that women were being “forced to remain pregnant against their will” in violation of the state’s constitution.

Kentucky’s abortion trigger law contains a narrow exception allowing a physician to perform the procedure if it is deemed necessary to prevent the death or permanent injury of the mother.

Gov. Andy Beshear, a Democrat, has denounced that law as “extremist,” noting it lacks exceptions for rape and incest.

Cameron, a Republican who is running for governor, said Tuesday night that he was disappointed Kentucky’s new abortion laws are being delayed.

“We’ve now asked all three levels of Kentucky’s judiciary to allow these laws to take effect," he said in a social media statement. “Not a single judge at any level has suggested these laws are unconstitutional, yet we are unfortunately still prohibited from enforcing them.”

The lawsuit filed by the Kentucky clinics' attorneys is one of numerous such efforts taking place in states that passed similar laws in anticipation of the Supreme Court's decision overturning Roe v. Wade earlier this month.

Elsewhere in the South, a Mississippi judge on Tuesday rejected a request by the state’s only abortion clinic to temporarily block a law that would ban most abortions. In Florida, a new 15-week abortion ban was blocked but then quickly reinstated after an appeal from the state attorney general in a lawsuit challenging the restriction.